Joining Hands Across the Aisle to Deport Immigrant Criminals 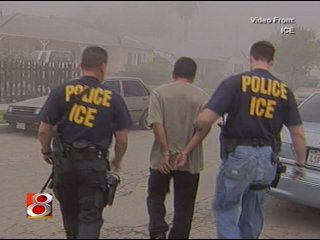 In addition to border security, another source of broad agreement in the immigration reform is the widely shared conviction that noncitizen immigrants (whether here legally or not) should be “removed” from this country if they have criminal records. Even nongovernmental advocates of immigration reform accept the criminal exclusion provisions, or at least haven’t opposed these restrictions.

At first glance, this determination to deny legal residency and to deport criminal immigrants makes good sense. Why, after all, should America open its borders to foreigners who not only threaten public safety but who also burden every level of government with law enforcement, prosecution, and incarceration costs?

One should expect that in the coming immigration debate all the main actors – whether they be progressives, liberals, centrists, conservatives, and hawks -- will accept the notion that so-called “criminal aliens” have no place in U.S. society.

Yet if immigration reform is largely about social justice, can this automatic exclusion be defended morally? There are also unaddressed questions about the impact of this exclusion and deportation of criminals on the stability of neighboring nations and the spread of international criminal networks.

For reform advocates, opposition (whether tacit or explicit) against including criminals from immigration-reform benefits may stem less from an ethical conviction than from a political calculation – much as support for border security operations is seen as a precondition for any reform.

As the prospects for reform increase, it will be tempting for advocates to maintain a sharp focus on the strategy and tactics of the reform campaign, yet give short shrift to their own rhetorical and social-justice arguments for legalization of those immigrants who are already part of our communities and economy.

If “Immigrants are America” and if immigrants are “America’s voice,” as the pro-reform slogans have it, then the immigration reform campaign shouldn’t be so narrowly fought – only on strictly immigration issues.

In the past, immigration reform activists have been so focused on their own campaigns and strategies that they have not sought out allies in the prison-reform, criminal-justice reform, and drug-law reform movements.

There are strong and increasingly powerful movements and lobbies to reform drug laws, mass imprisonment practices, and the dysfunctional criminal justice system. Immigration reformers would do well ally themselves with such citizen movements.

For fear of reinforcing the anti-immigrant stereotypes of immigrants as criminals and drug addicts, the immigration reform campaign over the past two decades has largely distanced itself from the movements against mass incarceration, drug prohibition, and the expansion of the federal government’s domination of our criminal justice system.

There are few other sectors of U.S. society that have been so victimized by our nation’s drug laws, imprisonment habit, and harsh criminal justice system.

Since the early 1990s there has been a steadily increasing merger of the criminal justice, drug prohibition, and immigration enforcement systems. Scholars call this conflation of immigration and criminal system the crimmigration of America.

Once caught in the grips of crimmigration, immigrants are doubly punished – first by jail, fines, and prison sentences; and second by automatic removal from the country.

Many otherwise law-abiding immigrants, as do many U.S. citizens, have drug violations on their record. Many immigrants have spent some time in jail or been on probation, the same as millions of U.S. citizens. If we are to accept that America has been a nation of immigrants and that immigrants continue to be an integral part of this nation, then our lawmakers shouldn’t exclude immigrants from the benefits of any immigration reform.

Such a course of action would preempt hundreds of thousands of future deportations that separate families and weaken communities.  Dealing directly with the criminal alien shibboleth in the reform debate, rather than assuming that all immigrants with records will be ineligible for reform benefits, would created a more expansive community of immigration reform proponents, including member of the growing anti-drug prohibition movement.

In both cases, stances in favor of border security and ridding the nation of criminal immigrants are regarded as good and necessary politics on the path to immigration reform.

However, there are costs to accepting both these conditions – continued border-security buildup and exclusion of beneficiaries – they will surely be paid down the road.
Posted by Tom Barry at 1:46 PM
Email ThisBlogThis!Share to TwitterShare to FacebookShare to Pinterest