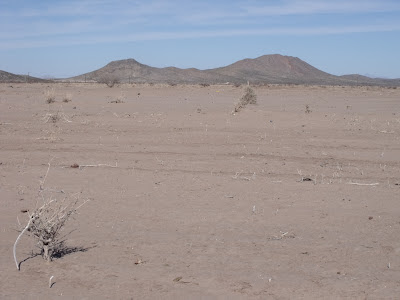 While at a party in Washington, DC two weeks ago I found myself blurting out that I thought that the water crisis in northern Mexico and across the border into the U.S. Southwest had far more serious social and economic repercussions than the Mexico Drug War.

But could I back up that assertion? Should or could the two crises even be rightly compared?

Having since read A Great Aridness by William deBuys, I come to conversation about climate change and the particularly devastating impact it is having on this region better informed and more alarmed.

Certainly there’s nothing to compare with the horror of the drug war. How do you compare the nine tortured bodies hanging from a Nuevo Laredo bridge and the fourteen decapitated bodies found elsewhere in the city a couple of days ago with dusty overgrazed ranchlands and precipitously dropping groundwater levels?

I will be traveling this week to the Chihuahuan borderland region that stretches from Ciudad Juárez to the Sierra Madre Occidental. No one there makes the comparison. Nor should I.

The fear, sense of personal insecurity, images of drug-war related violence are personal, immediate, and nightmarish. In contrast, no one is being tortured to death by the water crisis, or even dying. Tens of thousands of Mexicans have fled this war-scarred region for the safety and relative wealth of El Paso. The land is cracked and eroded, the wells are drying up, and the cattle are starving. At least not yet, however is there a stream of drought refugees fleeing the great Chihuahua dust bowl.

From Juárez to Janos, Chihuahua city to Casas Grandes, Chihuahuenses are starting to talk openly about their collective fear that the past is not the future. The period of cyclical droughts is being overtaken by an era of endless climate-induced drought and relentless summer heat. Dying trees, dying cattle, and dry arroyos that someday soon may again carry the runoff from the hills.

Although it may be still years distant, the Mexican Drug War will eventually end, as drug corridors shift and drug policies change. What will not change, however, is the warming climate change that is quickly reconfiguring the landscape and society of crossborder region that spreads north from the Chihuahuan and Sonoran deserts to the Colorado Plateau.

Alarmism is a political tool aimed at boosting political campaigns and attracting federal pork in the form of border security funds. Drug-war related violence stops, with rare exceptions, at Mexico’s northern border. But there’s “A Great Aridness” that knows no boundaries and merits the concern – and yes, alarm – of the residents of what deBuys describes as the arid but increasingly water-hungry region he calls the “North American Southwest.”

If you love this land “fabled for its beauty, severity, and geological nakedness,” you will that deBuys shares this profound connection with the Southwest of Georgia O’Keefe and Aldo Leopold. And these ties to the mesas, grasslands and montane forests of Southwest make A Great Aridness more than a doomsday vision – which is surely is – than a heartbreaking call for us to wake to the signs of a climate change that will inalterably destroy our homelands.

DeBuys, relying on extensive research, interviews, and landscape readings, makes that case that we are experiencing a “global-type drought.” As one scientist he interviews reports, “What’s going to happen to the West can be summoned up in three things: fire, dead trees, and dust.” The author adds a fourth – “thirst,” pointing to the rapidly dropping water tables in places like Janos, Chihuahua and the dramatic decline in water levels in Lake Mead. A combination of factors, led by climate change and population growth, is creating a vicious feedback loop that is changing landscapes beyond the “range of natural variability” and rocketing us forward into grim ecological future.

In the book’s introduction, de Buys warns that “southwesterners and their oasis-based, aridland, hydraulic society will have to reinvent themselves in new and undoubtedly painful ways.”

By the book’s end, after taking us through the riders of the coming ecological and social apocalypse (“Drought, Fire, Pestilence, and Discord”), this glooming initial assessment of the future seems an understatement.

Readers will be grateful to the author for both his great love of the North American Southwest and for his persuasively documented alarm as to its – our –fate.