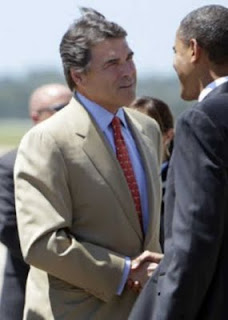 Governor Rick Perry met briefly (36 seconds) on the tarmac of the Austin airport when President Obama traveled to Texas a year ago.
Perry wanted more time with the president to discuss the issue one which he rode to victory in the primary contest and in the general election against his Democratic opponent.  It wasn’t the issue of his forthcoming book, Fed Up!, which is a tirade against big government and for states’ rights and unregulated private enterprise. Rather, Perry’s pressing concern was about border security.
“My hope was to have a very frank, face-to-face discussion [with the president] about the issue of border security,” lamented Perry, who took advantage of the occasion to hand a letter to the president complaining about his administration’s failure to secure the border.
Later that day Perry had a chance to talk at length about border security in Texas.  The Texas Public Policy Foundation, a conservative think tank in Austin with close ties to the governor, had invited the governor to address border security as part of its Lone Star lecture series.
During his speech Perry criticized the Obama administration’s border control policy as “lackadaisical” and “an abject failure,” while warning that “spillover violence” from Mexico was wreaking havoc in Texas.  Not only was the drug-related violence spilling over into the Texas borderland but also was taking the form of increased “transnational gang” violence in the state’s interior cities.
In contrast to the get-government-off-our-backs messaging of his book Fed Up!, Perry insisted that the “federal government step up” and “secure our borders.”
The political community in Texas has long been aware of the governor’s close relationship with the Texas Public Policy Foundation.  The ideological alliance between the governor and the policy institute was underscored by the publication of Fed Up!, which Perry described as a product of his partnership with TPPF.  Within Texas, the governor’s political closeness with the institute was again highlighted when on Perry keynoted the institute’s 2011 Policy Orientation Conference, a traditional gathering of Texas Republicans.
In November 2002 the Texas Monthly profiled James Leininger, the founder of TPFF and a longtime Perry campaign contributor. In her “Mr. Right” story, Texas Monthly reporter Karen Ollson wrote:
What makes Leininger one of the most powerful people in Texas politics is less the amount of money he has given over the years than the broad reach of his spending and his commitment to a conservative agenda. By pumping tens of thousands of dollars into the previously ignored State Board of Education races, he turned an obscure committee of retired teachers into an ideological hornet's nest, whose debates over curriculum and textbook content have made national news. In addition to funding candidates personally, Leininger has launched several political action committees to support conservative judicial and legislative candidates and advocate for school vouchers. He has, moreover, established an entire politics and policy conglomerate in Texas. He founded and provided seed money for the Texas Public Policy Foundation, an increasingly influential conservative think tank, in 1989. He has invested millions in private school voucher programs in San Antonio, the first of which he initiated in 1993. Some regard the state Republican party as an extension of his empire; its chair, Susan Weddington, is a former Kinetic Concepts [a company founded by Leininger] employee, and the $475,000 Leininger donated to state party and caucus committees in the 2000 election cycle far exceeded the amount contributed by any other individual or organization in Texas, according to a report by the Center for Public Integrity.
After Perry announced his candidacy, Texans for Policy Justice issued a report titled Rick Perry’s Heavenly Host. The report observes:

Perry might never have been governor—nor now be a presidential candidate—but for James Leininger. In a game-changing 1998 race then-Texas Agriculture Commissioner Perry was elected Lieutenant Governor. That victory secured Perry’s automatic promotion to governor two years later when President-Elect Bush abandoned the Governor’s Mansion. Perry narrowly won his fateful 1998 race against Democrat John Sharp, capturing just 50.04 percent of the vote. This squeaker victory was secured by an eleventh-hour media blitz that Perry paid for with a last-minute, $1.1 million loan. Leininger and two other Texas tycoons guaranteed the loan, which supplied more than 10 percent of the $10.3 million that Perry raised for that election. Leininger’s family and company PAC contributed $62,500 to that Perry campaign. Leininger also was the No. 1 contributor at the time to the Texas Republican Party (then chaired by former Leininger employee Susan Weddington), which sank $82,760 into that Perry campaign. “I congratulate Leininger,” Perry opponent John Sharp said at the time. “He wanted to buy the reins of state government. And by God, he got them.”
Last weekend as Hurricane Irene dominated the national news, Leininger was hosting a meeting of Christian evangelicals and Perry at the right-wing magnate’s estate. As Dallas News reporter Wayne Slater noted in his Aug. 24 article, “A Marriage Made In Heaven”:
When Rick Perry heads this weekend to Jim Leininger's ranch for a confab of Christian conservatives, he'll be on hallowed ground. Leininger has long been one of Perry's financial angels. He's been a leading proponent of school vouchers and bankrolled the campaign to ban gay marriage. And he's given large sums to Perry campaigns over the years. In some quarters, he's seen as saving Perry's political career with a last-minute infusion of $1.1 million to fuel Perry's 1998 victory as lieutenant governor.
With Perry assuming frontrunner status in the race to become the Republican Party’s standard bearer for the presidency, the policy positions of the TPFF and its donor base deserve a closer look by the national media and electorate.
On Aug. 18 the  Border Lines of the Center for International Policy published a profile of the Texas Public Policy Foundation and its relationship to Perry titled “The Fed Up Think Tank in Austin,” which stated: If Rick Perry goes to Washington, it's likely that he will bring with him the conservative policies and principles of the Texas Public Policy Foundation.
I encourage you to join the Border Wars Google Group to follow/discuss border security, immigrant imprisonment, and drug policy issues at:

http://groups.google.com/group/border-wars
Posted by Tom Barry at 11:14 AM 1 comment:
Email ThisBlogThis!Share to TwitterShare to FacebookShare to Pinterest
Labels: Rick Perry

What's So Frightening About Mexico's Drug War and El Sicario 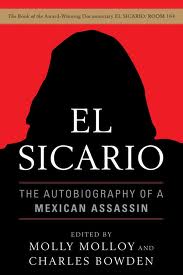 What’s so frightening about El Sicario isn’t that it’s so shocking in its details of drug war violence. The humanity of this “Autobiography of a Mexican Assassin” stays with you more than its inhumanity.
The chronicles of the unnamed sicario (common term for a hitman in Latin America), as related to Molly Molloy and Chuck Bowden, include graphic detail of killings and torture.
But we have already seen and heard much of it. Over the past four years, there has been no dearth of images and reports of the horrific violence that has besieged many parts of Mexico. Graphic photos and video of mutilations and torture sessions are readily available on the internet. If you missed all that, border law enforcement officials and the Border Patrol are busy presenting slide shows of the violence in schools and other public venues to warn about the consequences of drug use.
But what sticks with you after reading El Sicario (Nation Books, 2011) are not the horrors and magnitude of the drug-related violence in Mexico but the humanity of the story – how easily and understandably a person could become a killer for drug money. That’s truly frightening given the extent of the illegal drug market in the United States and Europe and its deepening penetration of less developed countries like Mexico.
He recalls his boyhood in a Juárez colonia – the special day at the circus with his dad – and his early dream of escape from poverty to a life of wealth and power. Easy money for smuggling drugs into El Paso led to a deeper involvement in the drug trade, along with the allure of favors of women, drugs, and spending money, especially after he agreed to enter a police training academy under the auspices of the drug trafficking organizations (DTOs).
But years of killing as a drug cartel enforcer took an emotional, physical, and spiritual toll, eventually leaving him open for the first time to the seductive appeal of a highway billboard:
“If You Have Problems, Call Upon Him”
By helping this repentant killer tell his story, editors Molloy and Bowden offer the reader what is truly an inside story. In the telling, this sicario helps us understand how the hopes and dreams of a young man from Juárez can turn to a life of professional killing. It’s an insider story that provides an unusual window into the political economy of Mexico and its intersection with the drug market, both in Mexico and across the border in the United States.
As he begins his tale -- from child to sicario to religious redemption -- the killer tells us that, as a boy, he kept thinking about the day when finally he “could be somebody” – a person who could say: “I want that. And have it. I wanted to be the man who could wish for a really big house, and have it.”
It wasn’t that he was born a criminal, raised in a dysfunctional family, born evil. Rather he was at heart a consumer who, like most of us, wanted more – and the multi-billion dollar drug trade created by drug prohibition let him have it.
Looking Back to Mexico
Living in exile in the United States, the sicario looks back across the border with deep pessimism. Although he occasionally expresses sympathy for the government’s campaign against the cartels, this reformed assassin more often describes a political and criminal justice system that is thoroughly corrupt and compromised.

The Fed Up Think Tank in Austin: Rick Perry and the Texas Public Policy Foundation 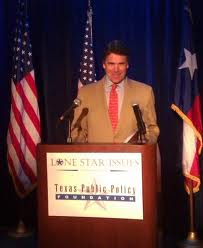 I encourage you to join the Border Wars Google Group to follow/discuss border security, immigrant imprisonment, and drug policy issues at:

Posted by Tom Barry at 11:36 AM No comments:
Email ThisBlogThis!Share to TwitterShare to FacebookShare to Pinterest
Labels: Rick Perry

I encourage you to join the Border Wars Google Group to follow/discuss border security, immigrant imprisonment, and drug policy issues at: