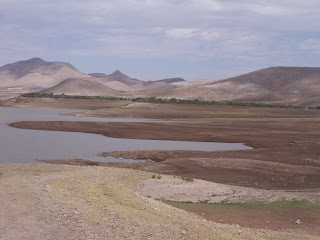 Despite the diminishing violence in the Chihuahuan border city of Juárez, government officials are warning about problems of governability in Chihuahua. But the new threat doesn’t come from the war over drugs but from the conflicts over water in the midst of the state’s most severe drought in seventy years.

In Mexico City this week officials of the National Water Commission (CONAGUA) charged that the drought-wracked state wasn’t providing adequate security for agency inspectors. Over the past month CONAGUA has shut down more than 150 illegal wells and numerous illegal check dams in central Chihuahua.

The ongoing drought, which began in 2010, has sparked long-simmering tensions over the state’s scarce water supplies.

Because of the reduced rainfall and snowmelt in this largely desert state, the water levels in reservoirs have dropped precipitously, thereby dramatically decreasing the water available for irrigation in the associated agricultural water districts. The empty and near-empty reservoirs in Chihuahua mirror similar scenes north of the border, where farmers are also suffering from reduced allocations of irrigation water.

When Conagua officials warn about the lack of governability in rural areas, they are referring mostly to conflicts arising from the use and abuse of groundwater. The aquifers that have collected water over the millennia are largely overexploited – with water levels dropping fast. From one year to the next, the depth at which wells tap into aquifers is not uncommonly 6-10 feet lower.

A succession of droughts since the mid-1990s have led to much-reduced recharge rates for the aquifers that lie under Chihuahua and the arid lands of northern Mexico. The severity of the droughts – especially the 2000-2004 drought and the current one – along with record low temperature events have led to common conviction that climate change is hitting the region hard.

Unlike in the past, where the desert denizens resignedly waited out the droughts, there is a new sense rising in Chihuahua that long-term survival is the challenge of the 21st century. 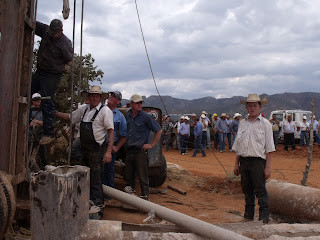 “Climate change is the major threat to the survival of rural Chihuahua,” said Martín Solís, the Chihuahua state director of the small-farmers organization El Barzón. But Solís is quick to add that this threat can be met if government and rural communities resolve the political and structural causes that have wrung Chihuahua dry.

The emerging water wars in Chihuahua have muddied politics.
Pressured by organizations of small farmers – mobilized by El Barzón – the state office of CONAGUA agreed to start shutting down illegal wells and water catchments in the El Carmen water district.

The increasingly harsh conditions created by the 2010-2012 drought have intensified popular pressure on CONAGUA to stop the water-pumping boom.

Mennonite farmers have been the main beneficiaries of CONAGUA’s failure to regulate the pumping of groundwater. While CONAGUA acceded to popular demands to shut down illegal Mennonite wells in the Namiquipa – Buenaventura – Riva Palacio region, the state government has generally sided more with the Mennonite agricultural colonies because of their economic clout.

Non-Mennonite small farmers, energized by CONAGUA’s decision to close illegal wells in the contested region, are pressuring the agency and the government to stop illegal well drilling throughout the state.

Meanwhile, Mennonite farmers, recognizing the rising threat, have mobilized to win assurances from the governor that their interests would be protected. Some Mennonites have said that they will protect their wells with firearms – a threat that has alarmed CONAGUA and raised tensions between Mennonite and non-Mennonite farmers.

Referring to these tensions, Joaquín Solorio, a member of the Defenders of Chihuahuan Desert Water Collective and ejido member in the El Carmen district, told a reporter that more government attention is needed to address what may become the “first water war” in Mexico. 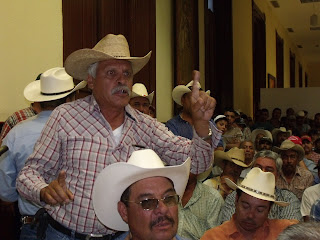 Not surprised the water wars are here in our back yard, surprised completely that Mennonites will be armed.... Don't Mennonite Communities relocate when there are problems??? What has happened to the anabaptist movement of the 21st C? Guess I have some research to do now. I am a little sad about this.