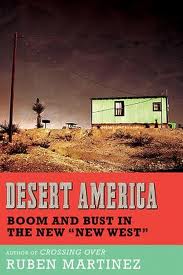 Crossing Over by Rubén Martínez is the best book-length treatment of Mexican immigration. That’s largely because Martínez didn’t focus as much on the crossing over as on the life of immigrant families and communities on both sides of the border. But the book’s greatness is also due to sensitive reporting of Martínez, who not only covered both sides of the border but also both the positive and negative impacts of crossing over. An added bonus was the author’s own reflections on immigration as the son of a Mexican-American father and a mother from El Salvador.

Crossing Over stands up well over time despite the changing migratory trends and heated politics of immigration since 2001, when the book was published.

It’s hard to get beyond the title of the latest book by Martínez: Desert America: Boom and Bust in the New “New West.” If you can get beyond the title – forgetting that the book promises to explore “desert” America, the recent boom and bust, and the West – then you will find a highly personal collection of anecdotal reports about several remote spots in the Southwest: the mountain village of Velarde in northern New Mexico, Joshua Tree in the Mojave Desert, Tohono O’odam borderlands, and Marfa in Far West Texas.

These are all fascinating places and serve as stages on which Martínez reflects about his own life, addictions, heritage, and identity. If you want to know more about any of these disparate, distinct places or if you want to know much more about Martínez, then traveling through the author’s version of “Desert America” and the “New ‘New West’” is recommended reading. Martínez is particularly good at exploring the insider/outsider dynamics that have come to define these locations and by extension many places throughout the West.

The book’s title creates unfulfilled grand expectations. More honest and representative of the narrative content of Desert America are the author’s own words in the final sentences of the introduction. Martínez observes that “intense desires” – for more space, to live in the past, to protect what they regard is theirs, or lose themselves in new landscapes – have “created tendency for people to wipe out their neighbors.”

About the people and desires, Martínez tells it straight: “I lived in and among them all. The only way to tell my story, it seemed, was to tell theirs.”