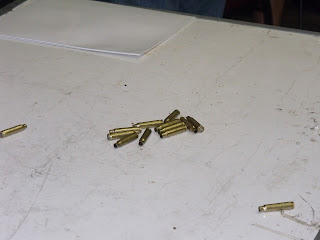 The brass bullet shells lay strewn across the plat map. It was about 9:30 at night, and I was again in the Palacio de Gobierno in Chihuahua City. The room was packed with angry farmers who had decided to caravan to the capital in their pickups after a confrontation with trigger-happy police

My camera, which had set off the confrontation about six hours earlier, was still with me.

It was Monday, July 2, the day after the presidential election.  I hadn’t expected to be back to the center of state government in Chihuahua so soon. In fact, I had been heading north back to the United States, passing through the Mennonite farming colonies north of Cuauhtémoc on my way for a breakfast meeting at a remote crossroads café.

The day before Martín Solís, the leader of El Barzón in Chihuahua, had suggested I meet him at Ojo de la Yegua for an important action led by the small farmers organization. I wasn’t the only invitee. In addition to local farmers, Solís and his colleagues had invited government water, environment, and rural development officials, who had, he said, promised to come.

This action might be an historic moment in confronting the water crisis in Chihuahua, observed Solís, because it would be a collaborative effort by government agencies and small farmers to identity and shut down the hundreds of illegal wells and check dams that were proliferating.

When I arrived at this unpopulated spot on the map, Solís and his colleagues had the plat map – the same one that was thrust before the government officials that evening – spread over the table of the crossroads café. Like the store next door, Mennonites owned the café. The men were pointing to the illegal wells they intended to target after the government men arrived from Chihuahua. 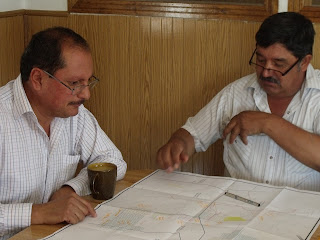 Early evening Saturday, two days previously, I shifted roles – from researcher/policy analyst to tourist in downtown Chihuahua. After snapping photos of a spirited gathering of “Yo Soy 132” activists in the central plaza, I walked across the street to check out the Palacio de Gobierno, where the governor had his offices. I had never been there before, the murals that covered the walls of the palace’s majestic courtyard were a must see, I had heard.

The murals tell the official story of the history of Chihuahua, although breaking off with images of a heroic Francisco “Pancho” Villa, the first revolutionary governor of the state – the largest in the nation.

I joined a tour in progress – of schoolchildren with their teachers. First stop was the main attraction: the Altar a la Patria – the site where Miguel Hidalgo, a priest from the colonial town of Dolores in Guanajuato, was executed in 1811 for his central role in the first serious insurrection against the Spanish crown. His decapitated head was hung from a public building as an example and warning – a tradition that continues today in the Mexican drug wars.

Padre Hidalgo spoke of the need for an insurrection from the pulpit in Dolores, and this “Grito de Dolores” – often called the Grito de Hidalgo – is commemorated annually on September 15 throughout Mexico.

As I left the palace the day of my tour, I was reflecting about the way the history of Chihuahua had been painted in blood, savage and heroic killing portrayed in mural after mural. I wondered what lessons they were absorbing during this period modern history when the horrific violence of Chihuahua was world news and had won the state’s largest city the reputation for being the “world’s murder capital.”

Bloody history. The history of most other nations is not so different. The blood/history/progress connection was certainly lesson number one of the tour of the Palacio courtyard.

But there was also another key part of that history lesson. Lots of blood, and nothing but men in the official telling of Chihuahua’s history. The male-only history may be essentially accurate. But viewing mural after mural of angry, vengeful, and exalted men was nonetheless oppressive. Not one woman, as I recall, was profiled. Without any intervention by the teachers or the guide about the structure and centrality of patriarchy in history, what lesson could these children draw about the worth of women as actors in their own history?

When I returned to the palace two days later, having traveled a few hours over the mountains as part of a caravan of pick-up trucks (my minivan being the lone exception) from the scene of the police shooting, I noticed part of Chihuahua’s historical record that I had missed the first time – and it had very much to do with women in Chihuahua.

In the plaza across from the palace stands a memorial to the hundreds of women murdered and disappeared in Juárez and throughout Chihuahua over the last couple of decades.

I had also missed the plaque that citizen activists and women’s rights proponents had placed on the sidewalk immediately in front of the massive door that opens into the palace foyer and courtyard. It was on that spot that Marisela Escobedo was gunned down on December 16, 2010 by unknown assailants as she protested the unpunished murder of her daughter Rubí Marisol, 16, two years before. Before her own death, Marisela, 52, had become a leader in the movement to demand justice for women in Chihuahua. 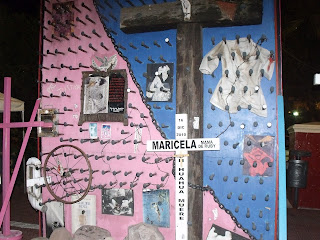 For the past several of months I have been traveling throughout the northern Mexican state, which had been the bloody frontline of the drug wars set off by the decision in December 2006 by the new president Felipe Calderón to massively deploy the Mexican military against the drug cartels.  But I had no intention of reporting on the drug wars.

Unfortunately-- although understandably -- the drug wars have obscured most other aspects of binational relations and crossborder life. Headlines, after all, are generally written in blood.

Yet when crossing into Chihuahua, it is the water crisis not bloodletting that screams for headline attention.

Fortunately, there is no blood in this account. But bullets were fired, and for a moment I was as terrified as I have ever been.

During several trips to the Mexican borderlands and into central Chihuahua, I had been accumulating stories of a rapidly escalating water crisis – of farm wells going dry, new wells being drilled to unprecedented depths (more than 300 meters), desperate residents of the poor colonias of Juárez and Chihuahua complaining of their increasing lack of water to drink and cook with, reservoirs drying up at an alarming pace, drought-stricken Tarahumaras coming down from the parched mountains, and ranchers letting their cattle die on the range – by the hundreds of thousands.

Most everyone laments that never before had they seen such an intense drought. “Not in my life.” “Never before in our history.” “The mountains no longer bring the rain, and the land is dead.” Over and over I heard these and similar complaints.

Lately, however, the anxiety on both sides of the border has become more acute. Talk has turned from the usual observations and complaints about the region’s aridity to deeper reflections about scarcity and survival. Whether from personal observation or obsessive reading of the latest research, the acceptance of climate change is altering the discussion and putting people on edge. 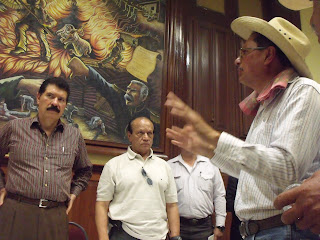 Standing in the Palacio de Gobierno late that evening, after the negotiations between the government and the farmers had concluded, I asked myself: “Would this day someday be remembered as the beginning of the water wars of the Chihuahuan Desert?” Or, “Was I simply witnessing a dramatic case of politics as usual in Mexico, where pretense, manipulation, and artifice predictably prevail over transparency, accountability, and solutions?”

(Succeeding articles will tell the story of the El Barzón action on July 2 and its consequences.)
Posted by Tom Barry at 1:18 PM
Email ThisBlogThis!Share to TwitterShare to FacebookShare to Pinterest