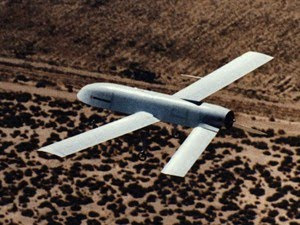 (Note: This is the first in a series on the deployment of UAV drones and ground-based electronic surveillance systems in the borderlands.)

How much is catching one unauthorized immigrant worth? Or confiscating one pound of marijuana?

These are questions that have never been asked by the Department of Homeland Security. To attain what DHS calls “operational control” over the borders, no expense is spared – and, apparently, no oversight or assessment are required.

Since the terrorist attacks of Sept. 11, 2001, the country has rallied around the goal of “border security.” And, like national security funding, when new public revenues are needed for this elusive concept of border security, budgeting has not been restrained by fiscal discipline, cost-benefit assessments, or contractor oversight.

More boots on the ground (a near tripling of number of Border Patrol agents) and the construction of a 670-mile border fence have been the most visible manifestations of the border security boom. But little attention – or government oversight – has been focused on the high-tech and immensely costly aspects of DHS’s Secure Border Initiative.

The massive outlays of DHS dollars for high-tech fixes, like the so-called virtual fence and the deployment of UAVs (Unmanned Aerial Vehicles), have sparked little or no public opposition -- in marked contrast, for example, to the surge of opposition to the border fence from community groups, environmentalists, and immigrant-rights organizations.

Environmental organizations like the Sierra Club have positioned themselves on the side of aerial and electronic surveillance while opposing the border wall and the setting aside of environmental impact statements in the name of border security. The organization’s Borderlands Campaign urged those who opposed the border wall to support the Border Security and Responsibility Act of 2009, the bill introduced by Rep. Raul Grijalva (D-Ariz.) that “provides guidance to move toward a more sane and just border policy.”


The Border Security and Responsibility Act calls for the end of the construction of the border fence (authorized by the Security Border Fence Act of 2006) while advocating “giving priority to the use of remote cameras, sensors… additional manpower, unmanned aerial vehicles, or other low impact border enforcement techniques.”

Progressive organizations like Latin American Working Group urged their members to support the anti-border wall bill, which called for less intrusive but vastly more expensive border-security measures. In an Oct. 10, 2009 letter to DHS, Sierra Club and Defenders of Wildlife do state that "w
Similarly, virtually all the immigrant-rights organizations, including the DC organizations leading the campaign for comprehensive immigration reform (National Immigration Forum, Center for American Progress, National Council of La Raza, and America’s Voice), enthusiastically and uncritically expressed their support for the comprehensive immigration reform () bill introduced in mid-December 2009 by Rep. Luis Gutierrez (D-Ill.).

The Comprehensive Immigration Reform for ’s Security and Prosperity ( ASAP), is widely considered, even by its advocates, as too left-of-center to be seriously considered by Congress. Yet even this progressive bill, which counts on the strong support of the Hispanic Caucus and the Progressive Caucus, attempts to bolster the security credentials of  advocacy with its backing of high-tech, extravagantly expensive, and unproved border security strategies.

In the summary of the bill provided by Gutierrez’s office,  ASAP states that it “minimizes wasteful spending by developing and studying comprehensive uses of advanced technologies, such as aerial and automated surveillance.”

According to this  bill, DHS should act “to gain operational control of the international land borders of the .” To do this, the DHS secretary should “give first priority to the use of remote cameras, sensors, removal of nonnative vegetation, incorporation of natural barriers, additional manpower, unmanned aerial vehicles, or other low impact border enforcement techniques.”

Integrating the environmental provisions of the proposed Border Security and Responsibility Act, the ASAP earned the support of such groups as the Sierra Club, Defenders of Wildlife, and the Center for Biological Diversity.  “Rep. Gutierrez and Rep. Grijalva deserve praise for recognizing the need for a responsible border security policy that minimizes harm to our precious borderlands, wildlife, and border communities,” said Sierra Club representative Michael Degnan.

Although ASAP wisely doesn’t include a price tag, the bill is laden with lots of pork for the border congressional members –- with recommendations for major increases in funding for borderlands infrastructure, law enforcement, and counternarcotics programs.

In its proposals to open new fonts of Department of Justice funding for local law enforcement agencies in the borderlands, this comprehensive immigration reform bill underscored the continuing merger of the criminal justice and immigration systems. In the bill’s Border Relief Grant Program section, for example, the Gutierrez bill would “authorize the Attorney General to award grants” to local law enforcement agencies along the northern and southern borders and in high-intensity drug-trafficking (HIDT) areas.

The proposal comes atop a series of DHS and DOJ programs launched since 2003 to increase federal funding to borderlands law enforcement forces, especially to county sheriffs along the southwestern border.

A two-part series in the Arizona Star highlighted DHS’ lack of oversight over Operation Stonegarden and the resulting abuses. Neither the DOJ nor DHS has been able to demonstrate how the border funding bonanza has increased border security. Nonetheless, the programs are politically popular especially in and , which is the likely reason for its inclusion in the bill.

The Gutierrez immigration bill also asserts that “the ports of entry to the require additional assets, personnel, infrastructure and improvements in technology.” Although promoted as an immigration bill, ASAP includes the policy recommendations that are part of the $5 billion bill introduced in 2009 by Rep. Silvestre Reyes (D-Texas) and Sen. John Cornyn (R-Texas) for infrastructure improvements and additional DHS personnel at borderlands ports-of-entry.

The $5 billion in proposed new federal funding would complement several years of major federal infusions for POE upgrades, including the $700 million including in President Obama’s economic stimulus package.

Like ASAP, the House bill introduced by Reyes, a 26-year veteran Border Patrol officer, comes with a catchy name: Putting Our Resources Toward Security (PORTS) – and like most immigration and border bills includes the now perfunctory inclusion of term security.

The Reyes-Cornyn bill has attracted enthusiastic support from southwest border business groups like the Texas Border Coalition. Reyes, who supports ASAP, says its PORTS-related border security provisions “would significantly increase funding and staffing levels at ’s land ports of entry to help combat the illegal transport of drugs, money, and weapons between the and and reduce excessive bridge wait times.”

Since elected to Congress from the district in 1997, Reyes has been a leading supporter of high-tech surveillance projects, including SBInet’s failed predecessors, Integrated Surveillance Intelligence System (ISIS) and the ’s Shield Initiative. The contractor for was a generous source of campaign funding for Reyes, and members of the Reyes family worked for the project which never functioned despite nearly a half-million dollars in federal funding.

Congressman Reyes is also a longtime and prominent supporter of DOD and DHS funding for unmanned aerial vehicles, which are partly developed by contractors working at El Paso-area military installations. Reyes is a member of the little-know but influential Congressional Unmanned Vehicle Caucus.

Unlike Republican-initiated immigration and border security bills, the Gutierrez bill doesn’t focus on clamping down illegal immigration or fortifying the border with more physical fencing. Instead its border-security recommendations are grouped around counterdrug programs, POE infrastructure, bolstering local criminal justice and law enforcement, and high-tech surveillance.

ASAP’s centerpiece is the proposed legalization of the country’s 11-million illegal immigrants, and it notably includes no provisions for increased local involvement in immigration enforcement, recommends environmental impact mitigation programs for the border fence, and calls for the termination of Operation Streamline.

As evident in the Gutierrez immigration reform bill, supporters of comprehensive immigration reform in and out of Congress commonly consider the border fence to be financially wasteful and environmentally destructive. But they have been largely uncritical of technological border security, including the network of electronic detection and surveillance of the virtual fence and the aerial surveillance of unmanned aerial vehicles UAVs.

(Next: The Shocking But Predictable Failure of the Virtual Fence)

With no foundation grants or institutional support, Tom Barry and the TransBorder Project of the Center for International Policy count on your financial support to continue this investigative, analytical, and advocacy work.


Go to the CIP online donation page, and write TransBorder Fellowship in comment section when making your donation. Or mail a check to CIP, noting this project. Thank you!
Posted by Tom Barry at 11:15 AM
Email ThisBlogThis!Share to TwitterShare to FacebookShare to Pinterest
Labels: border security