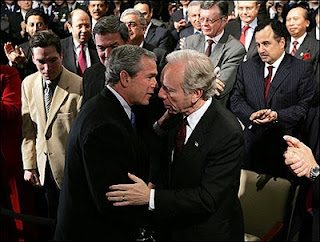 (This is the first article in a three-part series on the Department of Homeland Security.)
They don’t know what it is, so they call it an “enterprise.”
In the tradition of the Defense Department’s quadrennial review, Janet Napolitano, secretary of the Department of Homeland Security, released the department first Homeland Security Quadrennial Review on Feb. 1. As part of an attempt to address the department’s deep-seated identity problem and to distinguish it from its DOD big brother, DHS now refers to itself as a “Homeland Security Enterprise.”
George W. Bush will be remembered as the president who created this unwieldy new federal bureaucracy as part of his "Global War on Terror." But Democratic Party security hardliners like Sen. Joe Lieberman of Connecticut was one of the original proponents of a homeland security department, and the new Democratic Party administration of Barack Obama has unconditionally embraced the department as a core government institution.


Rather than using the review (mandated by Congress in 2007 in the midst of rising criticism of DHS) as an opportunity to reexamine the wisdom of creating this amalgam of 22 separate agencies organized around the homeland security theme, the Obama administration is allowing the department to consolidate and expand. Last year the administration moved ahead with plans to construct a $3.4 billion building to house this sprawling admixture of disparate agencies. The newly released Quadrennial Review now outlines plans for “maturing and strengthening the homeland security enterprise,” and the department's budget will rise 2% in 2011.
Faced with persistent criticism about management, oversight, and its lack of a unifying mission,  DHS is putting a new spin on its diffuse identity. In the Quadrennial Review, DHS states: “Homeland security is a distributed and diverse national enterprise.”
According to DHS, the term enterprise “refers to the collective efforts and shared responsibilities of Federal, State, local, tribal, territorial, nongovernmental, and private-sector partners—as well as individuals, families, and communities—to maintain critical homeland security capabilities. It recognizes the diverse risks, needs, and priorities of these different stakeholders, and connotes a broad-based community with a common interest in the public safety and well-being of and American society.”
Politics and a rush to create a new font of security-related funding were largely responsible for the ill-considered creation of DHS; and the continuing search for meaning and definition at DHS, as illustrated by this new DHS report, underscores the department’s fundamental and continuing dysfunction.
It’s worth recalling that, as part of his aggressive but badly focused response to the Sept. 11 attacks, President Bush created at first not a department but rather a new White House office -- the Office of Homeland Security. However, the homeland security office, headed by governor , was short-lived. Congressional Democrats, led by Senator Lieberman, insisted that the country needed more than an executive office to monitor domestic security.
According to Lieberman, the country needed a full-fledged homeland security department to organize domestically against terrorism. Lieberman, a leading Senate hawk and foreign policy neoconservative, also began beating the drums of war. He campaigned for the launching of wars against and in the aftermath of Sept. 11, as well as for boosting the Pentagon's budget and its domestic response capabilities.
President Bush -- although increasingly won over by the neoconservative foreign policy agenda promoted by Lieberman and others -- initially rejected the senator’s demand for  the creation of a homeland security department, arguing that bureaucratic expansion was a typically big-government Democratic response. But nine months after Sept. 11,  President Bush reversed course, tacitly accepting the proposals of congressional Democrats led by Lieberman to establish a new department.
In announcing his plan to establish the department on , President Bush declared that the government should “be reorganized to meet the new threats of the 21st century” and that the new department would involve “the most extensive reorganization of the federal government since the 1940s.”
Although the Homeland Security Act of 2002 was largely his proposal, it did not bear Lieberman's name but was sold to Congress as the president's initiative. But having succeeded in his mission to expand the nation's security apparatus, Lieberman didn't begrudge the president and the Republicans for having adopted his proposal. Instead he
began pushing hard for the other parts of his security agenda.


In a speech to the Progressive Policy Institute (an affiliate of the center-right Democratic Leadership Council) on , Lieberman not only reiterated his vision for a domestic defense department but also proposed adopting a new vision of the Pentagon's role in the domestic response to terrorism. With respect to the need for a homeland security department, Lieberman proclaimed:

“Our challenge and our responsibility after September 11th is to meet the deadly fervor of our terrorist enemies by adapting, responding, and reforming to protect our people from future attacks.

“For the U.S. Congress today, that means taking the disconnected pieces of a disorganized federal bureaucracy and reordering them into a unified, focused domestic defense department. While we create the new department, we must also develop a coherent and comprehensive homeland security strategy that can and will safeguard the American people -- and that the new department can implement as soon as it is up and running.”

But the core of Lieberman’s speech concerned not this new "domestic defense department" but the Defense Department itself. As Lieberman told his fellow Democrats:


“Today I want to talk to you about what should be one of the core components of such a larger strategy: maximizing the use of our military resources here at home. Our Department of Defense has more tools, training, technology, and talent to help combat the terrorist threat at home than any other federal agency. Our military has proven capable of brilliance beyond our borders. Now, we must tap its expertise and its resources within our country -- by better integrating the Defense Department into our homeland security plans.”

Lieberman went on to sketch out his proposal for the Pentagon's own role in domestic defense, with the homeland security department as its new junior partner. He set forth his vision of a well-funded security sector at home, including expanded domestic use of the National Guard by the Pentagon, funding for a new array of security technologies, and stepped-up intelligence operations.


This post-Sept. 11 rush to create a new security department and at the same time beef-up the Pentagon’s and intelligence community’s role in counterterrorism at home rose in part from a new bipartisan fervor to protect the homeland and strike out against Islamist terrorists.


But the birthing of DHS cannot be explained without also considering how military contractors and their politician partners had begun rallying around proposals calling for Congress and the White House to unleash vast sums of federal revenues in new homeland security-related contracts, issued either by the new department or by the Pentagon and the intelligence agencies.

From its conception the Department of Homeland Security was a hodge-podge without a clear mission or clear authority. It brought together 22 agencies and more than a hundred bureaus and subagencies. The decision as to which agencies to include was based more on political bargaining than on any clarity about the department’s mission or what would it take to create a cohesive department.
The one entity that had already had a mission somewhat aligned with the notion of homeland security was the National Guard, but it was reported that White House officials couldn’t figure out how to extract the Guard from DOD. It was also likely that both the Democratic Party architects of homeland security and White House officials saw from the beginning that DHS in counterterrorism matters would always be subservient to DOD, the intelligence agencies, and to a certain extent the FBI.
Organizational and mission problems plagued DHS from the start, as excellently reported by the Washington Post in its investigative article, “Department’s Mission Undermined from the Start.” Reporters Susan B. Glasser and Michael Grunwald concluded:

“DHS was initially expected to synthesize intelligence, secure borders, protect infrastructure and prepare for the next catastrophe. For most of those missions, the bipartisan Sept. 11 commission recently gave the Bush administration D's or F's. To some extent, the department was set up to fail. It was assigned the awesome responsibility of defending the homeland without the investigative, intelligence and military powers of the FBI, and the Pentagon; it was also repeatedly undermined by the White House that initially opposed its creation. But the department has also struggled to execute even seemingly basic tasks, such as prioritizing 's most critical infrastructure.”

The DHS’ Quadrennial Review strains to formulate a strategic framework for the Homeland Security Enterprise. The creation of DHS added another vast bureaucracy – with a $50-billion-plus department -- and to its security apparatus without bothering to explain to voters and taxpayers why such a multidepartmental complex is necessary.
As was to be expected, the initial strategic foundation of DHS was counterterrorism – warding off and responding to attacks on the homeland. The founding National Strategy for Homeland Security, issued in July 2002, declared that the department’s mission was to “mobilize and organize our nation to secure the homeland from terrorist attacks.” The strategy statement defined homeland security as “a concerted national effort to prevent terrorist attacks within the , reduce ’s vulnerability to terrorism, and minimize the damage and recover from attacks that do occur.”
One problem with such a formulation was that in the first two of these three functions the new department played only a supporting role to the FBI, DOD, and intelligence community. Another problem became startling clear in August 2005 when DHS flailed in face of the disaster left in the wake of Hurricane Katrina. DHS, organized around a counterterrorism mission -- albeit for politically opportunistic reasons and in a shockingly reckless fashion -- grossly failed its first test.

Funds are running low. With no foundation grants or institutional support, Tom Barry and the TransBorder Project of the Center for International Policy count on individual financial support to continue this investigative, analytical, and advocacy work.
Go to the CIP online donation page, and write TransBorder Fellowship in comment section when making your donation. Or mail a check to CIP, noting this project. Thank you!
Posted by Tom Barry at 8:19 AM
Email ThisBlogThis!Share to TwitterShare to FacebookShare to Pinterest
Labels: Homeland Security