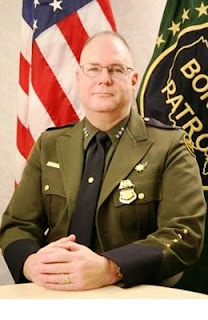 There’s a rapidly spinning revolving door at the Department of Homeland Security that is spitting out the officials who made the term homeland security part of our national politics and culture. The first two DHS secretaries – and Michael Chertoff – used their time at DHS as a prelude to starting their own security consulting agencies.
Lesser officials simply join somebody else’s security company.
Security consulting and homeland security contracting are booming businesses at a time when homeland security, national security, and intelligence operations are merging to form a national security complex. Even in times of a global economic downturn, homeland security contracting increased 12% in 2009 and is expected to continue that pace in 2010.
Command Consulting Group is one such beneficiary of the homeland security boom – and of former DHS officials eager to parlay their government experience and their contacts on the inside to private contractors. Twenty-six former DHS officials have turned in their DHS name tags and security classifications to join this security consulting agency.
The security consulting firm also has on board three former officials and ten former Pentagon officials.
Command Consulting Group boasts that it “provides a team unmatched in knowledge about current efforts to secure international borders using increasingly advanced concepts of operation and technology.”
says it is “an international advisory firm based in , which brings together an extraordinary team of leaders possessing decades of front-line, hands-on, operational and management experience in the agencies that make up the homeland and national security architecture of the government.” The company’s Security Advisory Services relies on a “team of operational security experts comprised of some of the very professionals who managed the institutions that make up the current security architecture of the government.
According to , the firm “leverages this extensive experience and market knowledge to assist our government, industry and investment banking clients in achieving their strategic and tactical objectives in the homeland security mission space.”
Not only can the consulting group facilitate contracts with DHS and other security agencies but also help navigate (around) government regulations.  The group’s Government Navigation & Regulatory Affairs division is “uniquely positioned to help clients see what’s around the corner, advise them on how to make their perspective heard prior to decisions being made, develop strategies to react to the outcomes, and increase the likelihood of a successful result.”
The most recent member of the team is Ronald Colburn, former deputy chief of the Border Patrol and former deputy director of the Secure Border Initiative, where are both components of Customs and Border Protection (CBP) at DHS. Colburn was welcomed to the national security consulting agency by his former boss at DHS.
“Ron Colburn is one of the foremost border security experts in the world today and helped me lead a critical U.S. Department of Homeland Security agency through a period of unprecedented growth and transformation,” said W. Ralph Basham, former CBP Commissioner.
“We are excited,” said Basham, “to have him join our international security advisory team and I know our clients will benefit from the experience of a leader who revolutionized our approach to border security and was on the ground for some of the biggest gains ever in operational control of our nation’s borders.”
Among the more than two dozen former DHS officials who are now part of the team are seven former officials of Customs and Border Protection. In addition to Basham, other former CBP officials at include the former director of policy and planning, three former chiefs of staff at CBP divisions, and the former executive director of CBP’s air and marine operations.
As makes clear, its “border security team” will continue to play a major role in border security policy and operations from their new perch in the private sector:

“No one understands the federal border security effort better or has more current knowledge and leadership insight into CBP at all levels. This experience also provided routine interaction with key Members of Congress and staff who play major policy and funding roles on border security as well as a familiarity with their priorities and those of other relevant policy makers within the federal government.”

Equally distressing are the contractors who work inside the Department of Homeland Security. Loren Flossman, who oversees "tactical infrastructure" for Customs and Border Protection, including border walls, came to the job from Strategic Applications International Corporation, one of the top 10 military contractors and a big recipient of contracts from DHS and Customs and Border Protection.

In 2005 a House oversight hearing chaired by Rep. Waxman found that more than half of the people put in charge of overseeing contracts for DHS were not federal employees, but were instead private contractors. Some of these had clear confrlicts of interest.

For those like Flossman who are federal employees, they are likely looking down the road to post-federal employment. Are they likely to land a job working for Boeing or the Chertoff Group if they come out and say that the multi-million dollar contracts for "tactical infratrusture", including pedestrian and virtual border walls, are a waste of money, or would facilitating more and more contracts be a better pad for their resumees?

This blog is very informative. Security Window Gates not only enhance security but can be tailor made to fit well within bars, serveries, windows and doors.