(The final article in a series on the turn to SBInet and UAVs for border security.)

Customs and Border Enforcement, the Homeland Security agency that includes the Border Patrol, claims that Unmanned Aerial Vehicles (UAVs) are a “force multiplier.”


CBP has made the same assertion about ground-based remote surveillance systems, starting in the late 1990s with , continuing through the ’s Shield Initiative, and most recently with SBInet. has not, however, been able to support this claim.

General Atomics’ founder and CEO Thomas Cassidy makes the same force-multiplier boast. “The partnership between General Atomics and DHS/CBP has served as a force multiplier to the existing southwest border domain awareness capability, providing a dramatic increase in the ability of CBP to monitor our borders,” stated Cassidy in a press release announcing the second DHS Predator UAV contract.

A December 2005 report by DHS’ Office of Inspector General cast doubt on the Border Patrol’s force-multiplier argument for UAVs. Based on the experience with the Hermes and Hunter UAVs, OIG found that operating one UAV requires a crew of 20 support personnel, not counting the number of Border Patrol agents involved in tracking down UAV-supplied surveillance videotape in the field.

OIG also found that the cost of operating a UAV is “more than double the cost of manned aircraft.” Furthermore, the use of UAVs “has resulted in fewer seizures.”

The same December 2005 OIG report on remote surveillance also noted: “During interviews with Border Patrol officials at headquarters and in the sector offices, we were told that remote surveillance technology was a force multiplier. However, [the agency] could not provide any quantifiable data to support this claim.”

In addition, the DHS inspector general also observed that UAVs were less effective, in their limited tests, than manned aircraft in supporting the apprehension of unauthorized aliens. According to the OIG report, the Border Patrol tapped UAVs to assist in the apprehension of illegal immigrants who had already been detected by other means – creating new doubts about how the accuracy of Border Patrol statements that UAVs play a central role in immigrant arrests and marijuana seizures.

At the time OIG released this disturbing report contrasting Border Patrol claims about the value of high-tech instruments of border security with the reality of their shortcomings and high costs, the Department of Homeland Security was on the cusp of greatly expanding both its ground and air surveillance systems.

However, instead of slowing down the development of these programs or calling for a major reassessment of its high-tech surveillance programs, CBP has kept pushing ahead, buoyed by seemingly unlimited congressional and executive branch support for all its border security programs, whether cost-effective or not. 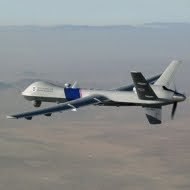 Concern about the costs of CBP’s push for UAVs has come from the Border Patrol Union. “Unmanned aircraft serve a very useful role in military combat situations, but are not economical or efficient in civilian law enforcement applications,” said T. J. Bonner, president of the union.

“There are a number of other technologies that are capable of providing a greater level of usefulness at a far lower cost,” Bonner said, “It appears that the contractors have once again managed to sell a bill of goods to the politicians and bureaucrats who oversee the procurement of technology designed to secure our borders.”

The advantages to the military of deploying armed UAVs – saving pilot lives in search-and-destroy missions in war zones – are manifest (albeit highly controversial). Less clear are the advantages of using unarmed UAVs for nontargeted information-gathering along the border.

CBP boasts of the speed and potential flying time of UAVs. But says nothing about their high cost, high accident rate, and fundamental dependence on industry and BP crews to interpret data and act on that data.

In contrast to a manned low-flying small planes and helicopters, whose pilot can quickly identify suspected illegal border crossers, a UAV needs a team on the ground to interpret data, thereby slowing the Border Patrol’s response.

Since 2004 CBP has been able to advance the UAV program – and SBInet-- in Congress, in DHS, and among the public largely because of its high-tech, cyber-is-great appeal. Underlying the program is an uncritical belief in possibilities of technology.

In the private sector and in most of government outside the national security apparatus, high-tech fixes like SBInet and the UAV program would likely come under more critical review because of its high cost. But when it comes to the government side of the national security complex, which taps the ever-rising budget authorizations for homeland security, there is no discernible bottom line – and therefore, apparently, no need for cost/benefit assessments.

The rush to bolster homeland security was understandable and politically popular in the wake of the Sept. 11 attacks. Yet more than eight years later the federal government and both political parties have been unable to focus on protecting the country against real and potential threats.

Trying to stand by its promise to gain “operational control” over the land borders, DHS has turned to high-tech fixes for border security. But its turn to technology – such as virtual fences and drones – reflects DHS’ now-endemic inability to mount focused border-security operations guided by risk assessments.

With little or no in-house technological expertise and with seemingly unlimited funds, DHS has recklessly pursued border-security strategies that aren’t tied to threat evaluations. In its pursuit of high-tech solutions, DHS hasn’t been bound by the type of financial concerns that burden nonsecurity government agencies and most of the American people.

With no foundation grants or institutional support, Tom Barry and the TransBorder Project of Center for International Policy count on individual financial support to continue this investigative, analytical, and advocacy work.

Go to the CIP online donation page, and write TransBorder Fellowship in comment section when making your donation. Or mail a check to CIP, noting this project. Thank you!
Posted by Tom Barry at 4:28 PM
Email ThisBlogThis!Share to TwitterShare to FacebookShare to Pinterest
Labels: border security

A brilliant article of yours in Dollars and Sense deserves wide reading - I will now use your term of "the national security state" or the national security complex." I do think you hew to the facts as you see them, but it is interpretation where we might differ. You claim this national security complex "undermines democracy." I say there is no "democracy" to be undermined, that the term is an ancient Greek term of no relevance to the highly managed, propaganda- driven movement of incredibly well-funded and insulated elites. If anything, "democracy" has been "replaced" by these actors, and I do not differentiate between the politicians and the contractors - one interlocked piece.
Still, your work should earn the highest respect.

Thanks for the comments. That certainly is the conundrum facing those with structural critiques. It seems the choices are revolution, cynicism, individual resistance (not paying taxes and such), or organizing/educating for reform within the system of governance we have. Although deeply cynical -- not about human beings but about elite structures -- I opt for the latter. Also, it may be that at some point, at least with respect to this complex, that the costs will start breaking our system of governance, and will be more seriously considered by actors and nonactors alike. Not any time soon, though.