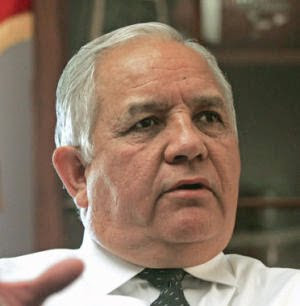 Recent statements U.S. Rep. Silvestre Reyes (D-Texas), the 26-year veteran of the Border Patrol who has served as chairman of the House Select Committee on Intelligence since January 2007, epitomize why the Democrats now rightly be said to fully own the country’s intelligence and homeland security mess. In the wake of the failed attempt to blow up a Detroit-bound international flight on Dec. 25, Rep. Reyes isn’t taking any responsibility. Asked by the El Paso Times about what President Obama called the "systemic failure" of the intelligence and homeland security apparatus, Reyes obfuscated, hemmed and hawed:

“When the president talks about a systemic failure, I'm assuming he's referring from a holistic point of view, to the whole system of checks that are in place for any airline that is coming to the U.S., or any U.S.-flag aircraft. We've got some work to do to fully understand exactly what happened, how it happened, and how we can correct it.”

What about the problems of sharing and communication among the intelligence agencies he oversees:

“Well, that's really the genesis of what we need to fully understand, how systematically everything works, how it dovetails together so we can get to a point where there's just one system that everyone relies on, one system that everybody feeds information into, one system that everybody depends on and checks for any kind of information….We have to get to a point where there's one central database. We've been working to get those issues resolved. I need to tell you that we're doing much better today than we've ever done, but clearly there still are these glitches. What we don't know is: is the system in place and somebody dropped the ball, or do we need to continue to work on the system.”

Nine years after the catastrophic intelligence failures of Sept.11, the House intelligence committee chairman seems lost in words and little-understood systems. And when asked, “Why haven't we already been screening for the chemical explosive PETN, given that it's been used in the past by terrorists in attempts to blow up airplanes, including by Richard Reid, the "shoe bomber?" Reyes avoided the question:

“First and foremost, there is technology out there that facilitates that screening. I don't know worldwide where we stand, I don't know if we are screening 40 percent or 50 percent, or what it is. That's another thing we have to look at.”

“Bottom line is, we're engaged in a war in Afghanistan that we can't abandon, and we can't downsize. We're doing some stuff in Yemen. Is it enough? I mean, we have to evaluate…I think if we've learned something out of this case on Christmas Day, it's that we better re-evaluate the Guantanamo Bay issue. That's going to be one of my recommendations.”

Finally, Reyes assures that the Select Intelligence Committee is going to have an investigative hearing about the most recent example of systemic intelligence failure.

“We're going to do a hearing,” he said, “Our hearings are done in a classified setting so that we can get all the information without having to worry about it getting out into the public domain.”

“Administration officials faulted the National Security Agency for not calling attention to intercepted communications from Yemen during the late summer and fall referring to a "Nigerian" being readied for an al-Qaeda attack, as well as what some intelligence officials said were direct conversations there between Abdulmutallab, whose name was unknown at the time, and radical American Yemeni cleric Anwar al-Aulaqi. “On Nov. 20, the CIA and the State Department learned from Abdulmutallab's worried father in Nigeria that his son was dealing with apparent radicals in Yemen and had severed all communication with his family. Although their reports put Abdulmutallab's name in the counterterrorism system for the first time, neither agency pursued the matter, checked whether he had a valid U.S. visa, or linked the information to the earlier intelligence about the unidentified Nigerian. “There is general agreement within the administration that the preponderance of information, put together, would have resulted in Abdulmutallab being added to a watch list and prohibited from boarding Northwest Airlines flight 253 on Dec. 25.”

Despite its history of systemic failure, the U.S. intelligence apparatus remains secure behind closed doors, with an ever-escalating budget (rising from an estimated $30 billion at the turn of the century to an estimated $66.5 billion today), and overseen by intelligence/national security sycophants like Reyes.
Ignorance Foretold
It’s little wonder that Reyes wants to keep his committee’s oversight activities out of the public domain, given his own ignorance about fundamental national security issues and his cozy relations with the intelligence agencies.
Shortly after he was appointed to be the new intelligence chairman, Reyes was interviewed by CQ.com and revealed his lack of familiarity with such Middle East groups as al-Qaeda and Hezbollah. Reyes couldn’t say whether Sunnis or Shiites composed al-Qaeda, wrongly guessing Shiites and thus apparently unaware of the origins of al-Qeada in Saudi Arabia.
When asked what Hezbollah (the Iran-supported group in Lebanon) was, Reyes was unable to say and joked that perhaps they could conduct the interview in Spanish.
Reyes has a history of acquiescing to (and rigorously supporting) the leadership of the intelligence community. Rather than seeing Obama’s election as a chance to exercise better oversight over the intelligence community and to install new leadership, Reyes made the surprising recommendation that president-elect Obama retain President Bush’s directors of the CIA and the National Security Agency.
In December 2008 Reyes told CongressDaily (Dec. 10) that he recommended to the Obama transition team that then-Director of National Intelligence Mike McConnell and then-CIA Director Michael Hayden should be kept in their posts at least six months. Despite a widespread conviction about Democrats that it was time to turn the page on the intelligence and domestic surveillance practices of the Bush administration, Reyes said, "There's got to be some continuity, and the leadership of both the CIA and the DNI is going to be pivotal to keeping us safe and secure."
See also from Border Lines:
Border Congressman’s Record on Intelligence Former Border Patrol Chief Now A Major Player
Posted by Tom Barry at 1:19 PM
Email ThisBlogThis!Share to TwitterShare to FacebookShare to Pinterest
Labels: Border Security Industrial Complex