Guantanamo and GEO Group Are Ready for Haitians 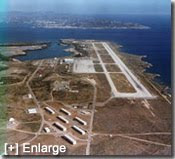 Already, too, the government is considering options in the event of increased illegal immigration from the stricken country.

" is going to be an enormously valuable asset as we go through this," State Department spokesman P.J. Crowley told reporters on Thursday. [] is in the vicinity. ... So we're identifying all of the assets in the region that we can use in order to stage operations."

Not only can the military at the Guantanamo Bay Naval Station and at the associated terrorist detention center GITMO provide logistical support as part of the assistance efforts, but the facility is also a possible location to house a post-earthquake wave of attempted immigration.

At the Guantanamo Bay Naval Station there’s a Homeland Security detention center waiting for Haitians and other islanders who are caught while seeking to reach shores. On this parcel of occupied by the U.S. Navy and infamous for the GITMO terrorist detention center, the is intended for immigrants caught at sea without entry documents.

In 2003, with the creation of the Department of Homeland Security, MOC was upgraded and its operation transferred from the department’s own Immigration and Customs Enforcement to GEO Group, the country’s second largest private prison firm. In part because of the special international standing of the military base – which one official called “the legal equivalent to outer space” – the State Department is cosponsor of the MOC contract.

GEO is responsible for providing all staff, supplies and equipment to manage and operate the center.

Under the terms of the contract, which was renewed for a five-year period in November 2006, “GEO is responsible for providing all staff, supplies and equipment to manage and operate the center.”

The 2003 contract was arranged, according to GEO, “at the emergency request of ICE in 2003” and offered the company “a unique opportunity.” Since responding positively to that emergency request, GEO says that Iit has “been successful working with ICE in this unique environment and has developed professional working relationships with all of the federal agencies involved in the operation of the MOC.”

There are close working relations between the controversial GITMO – which President Obama has promised to close – and MOC, if for no other reasons than their proximity and isolation. Phone calls to MOC are passed through the Naval Station’s switchboard, and GEO seeks staff from the military and support personnel at GITMO.

Closely related to the DHS initiative that put GEO Group in charge of the MOC in Guatanamo Bay is the DHS $385 million contract in 2006 with a KBR, subsidiary of Halliburton, to build temporary immigration detention centers in the even to immigration emergencies.

The 2006 contract with KBR represented an extension of a 2000 contract, under which KBR would build detention centers with a 5,000 detainee capacity for the Army Corps of Engineers.

According to an ICE spokesperson Jamie Zuieback, KBR would build the centers only in an emergency like the one when thousands of Cubans floated on rafts to the . She emphasized that the centers might never be built if such an emergency did not arise.

"It's the type of contract that could be used in some kind of mass migration," Ms. Zuieback said.

Posted by Tom Barry at 8:48 AM
Email ThisBlogThis!Share to TwitterShare to FacebookShare to Pinterest
Labels: Haiti

In todays NY Times, J Hansen states that 45,000 refugees could be hosted at Guantanamo. And, that is without interrupting prison operations.