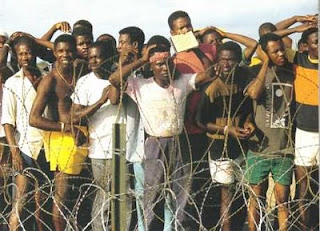 The military has operated a base surrounding for more than a century.

But has Tom Head, a civil rights blogger with About.com, points out, “it has only been over the past several decades that it has become notorious for the detention of foreign nationals.”

The devastation caused by the recent earthquake may spur many Haitians to attempt a highly risky sea crossing to escape the misery of their country. At the naval facility and prison complex at , the Department of Homeland Security has a near-empty detention center – called the -- that could serve as the center for detention and processing efforts in the .

In the past, this center has served has a holding facility to prevent unwanted Haitian and other migrants from entering the . Today, under a contract with DHS it is operated by Geo Group, a private prison corporation that relies on federal government detention/prison contracts for about 40% of its revenues.

According to “The Guantanamo Bay Detention Facility: A Short History, this center functioned as the federal government’s outlying detention center in the 1990s for immigrants who had attempted illegal entry by way of the :

Human rights activists were outraged when 310 HIV-positive Haitian immigrants were segregated from other refugees following the 1991 Haitian coup and imprisoned in , a crowded and unsanitary detention camp. They were finally released in 1993 after an international campaign.

was also used to house Guyanese migrants who had attempted to reach the by sea.