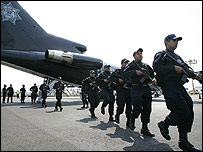 Drug War Zone
Frontline Dispatches from the Streets of and Juárez

Most frontline dispatches about the drug war in the U.S.-Mexico borderlands are just that – news reports dispatched by journalists attempting to tell the story of the intensifying drug violence in Juárez and other border communities.

This drug war journalism is often excellent. But too often the context, history, and culture of drug trafficking, consumption, and enforcement are missing – if for no other reason because of the space and time limits of news reporting.

Howard Campbell’s dispatches in his new book, Drug War Zone: Frontline Dispatches from the Streets of El Paso and Juárez, inject humanity and history into the drug story by allowing the protagonists of the drug war zone (DMZ) to speak for themselves. Campbell, an anthropologist at the at El Paso (UTEP) since 1990, has made his home territory -- the twin cities of and Juárez – the subject of his study. For this, we should be grateful and take the time to listen to these voices.

The Drug War Zone that has studied and brought so vividly to his readers through his interviews and thoughtful analysis comprises “the cultural world of drug traffickers and the law-enforcement agents who combat drug trafficking.” It is a “transnational, fluid cultural space in which contending forces battle over the meaning, value, and control of drugs.”

convincingly makes the case that the drug war zone is not new but rather only the current manifestation of a dynamic relationship between drug traffickers, drug users, and anti-drug narcs that has helped define the area’s culture, economy, and politics for many decades. Indeed, the explosive drug , while having its own distinctive dimensions and dynamic, may be best understood as an extension of “a nearly permanent part of world culture since the advent of agriculture.”

Interviewees include a high-level drug kingpin, middle-level organizers of drug deals, low-level mules, and street-level drug sellers as well a variety of law-enforcement officials including an undercover narc, a Juárez beat cop, the former head of an antinarcotics task force, an active Border Patrol agent, and a retired Border Patrol-DEA agent who is now a critic of the drug war.

These dispatches go beyond the killings, corruption, and politics to explore the narcocultura – the cultural complex or whole way of life centered around drug trafficking.  It’s a culture, writes , that is “now accepted as a given by mexicanos, fronterizos, and many social scientists.”

So pervasive is the drug economy and drug culture, observes , that in the area “everyone knows someone or is related to someone, who is a drug trafficker or a consumer.”

By letting his contacts within the narcocultura speak for themselves, shares with us a world that is all around us but little known except by its own members. A Mexican journalist explains, for example, that he learned to decipher the code words of drug-smuggling world – where street dealers are referred to in code as burreros (burrito venders) and high-ranking drug dealers are commonly called ganaderos (cattlemen).

The concluding interview is with Terry Nelson, a native Texan and former longtime Border Patrol and customs agent. Since retirement, this former “drug warrior” has waged an educational campaign to raise consciousness about “the futility and counterproductive effects of the war on drugs” through his involvement in Law Enforcement Against Prohibition (LEAP). “I had seen enough drug use,” says Nelson, “to know that it was not the huge evil that the government was portraying it as.”

Learning about LEAP after retirement, “I knew they were not a bund of ‘drug-smoking wackos’ and that they truly wanted to help by reducing crime and violence as well as by treating user that become addicted with medical care instead of incarceration.”

At UTEP’s 2009 Border Security Conference, which brought together high officials in the Obama administration with representatives of the major homeland security contractors, Professor Campbell stood up to counter the rosy drug war scenarios of the administration.

He spoke truth to power. And that truth is, as he writes in the book’s conclusion, that the counternarcotics aid to “cannot fix a broken policy.” While there are no quick solutions, says that the “the voices presented here all point toward the need for revised practices, innovative strategies, and new ways of thinking about the DMZ.”

These dispatches from the frontline are indeed persuasive. But even those who may already share this criticism of the drug war will surely appreciate this cutting edge anthropological work for deepening one’s understanding of the drug war zone and for reinforcing the increasingly widespread conviction that this is a war that cannot be won.

Posted by Tom Barry at 4:01 PM
Email ThisBlogThis!Share to TwitterShare to FacebookShare to Pinterest