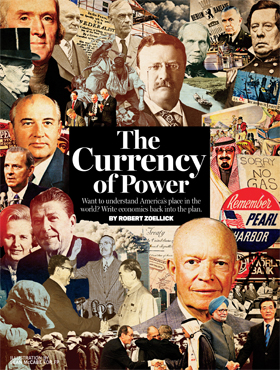 The following is my response to an essay by Robert Zoellick in Foreign Policy. Zoellick, who was the chief foreign policy adviser to the Romney campaign, responds to my critique in the most recent issue of the magazine, here.

By Tom Barry
In arguing that the United States should reintegrate economics into its foreign policy ("The Currency of Power," November 2012), Robert Zoellick ransacks America's past to make his case for a future foreign policy based on the conservative economics of debt reduction and budget-cutting. Echoing U.S. presidential candidate Mitt Romney's dismissive view of America's "47 percent," Zoellick, who was the Romney transition team's chief national security advisor, argues for a foreign economic policy that favors "makers over takers."
Twelve years ago, Zoellick had a different reading of history. His Foreign Affairs essay "Campaign 2000: A Republican Foreign Policy" foreshadowed a radical turn in U.S. foreign policy under President George W. Bush, under whom he served as U.S. trade representative and deputy secretary of state. Zoellick wrote that "a modern Republican foreign policy recognizes that there is still evil in the world," after joining neoconservatives in signing two open letters about the need for U.S.-led regime change in Iraq. More than a decade later, national debt has displaced evil in Zoellick's eyes as the leading threat to U.S. national security.
Zoellick concludes his Foreign Policy essay by asking, "If the United States does not lead now, who will?" That's certainly a central question in international relations. But neither U.S. military preeminence nor the conservative economics Zoellick embraces will restore America's hegemony. The kind of global swashbuckling practiced by the Bush administration -- and once hailed by Zoellick -- underscored the futility of U.S. military power while eroding respect for American leadership.
In his search for the keys to future influence, Zoellick has buried himself and the Republican Party in the doctrines of the past rather than looking forward. If the United States is to reassume global leadership, it will be because the country offers domestic and foreign policies that address climate change, economic inequity, and resource depletion, and chart new paths for international cooperation -- not because, as Zoellick argues, it signs more free trade treaties, reduces the debt by slashing social services for the "takers," or seeks power by maintaining a $700 billion military budget. Zoellick and the Republican Party will further marginalize themselves and the United States by continually trotting out old dogma about national power and the private sector. The new currency of global affairs lies elsewhere.

Posted by Tom Barry at 9:02 PM
Email ThisBlogThis!Share to TwitterShare to FacebookShare to Pinterest