It’s no idle boast. The DHS fleet of seven Predators and three Guardians (a marine-surveillance variant of the Predator developed for CBP by General Atomics) stand at the vanguard of drone deployment for domestic ISR missions, and DHS has provided grants to local law enforcement agencies to acquire small UAVs while also pushing the Federal Aviation Administration to open national airspace to CBP drones.

Since 2004, when CBP first started using these unmanned flying machines, CBP has steadily expanded the scope of its mission for drones. First, the Predators were deployed for “border security” on the US-Mexico border, but congressional members from Michigan and North Dakota successfully pressured DHS to deploy Predators to “secure the northern border.”

With its three Guardians, CBP/OAM has again reached beyond the land borders to join the Coast Guard, the Drug Enforcement Administration, and the US Northern and Southern Commands to engage in drug interdiction operations throughout the Caribbean, the Gulf of Mexico, and in the Pacific. What were initially considered to be instruments of “border security” have become fully engaged in the war on drugs. (The Obama administration also declared an end to the “war on drugs,” transitioning in 2011 to what the White House calls the “Combat against Transnational Criminal Organizations.) 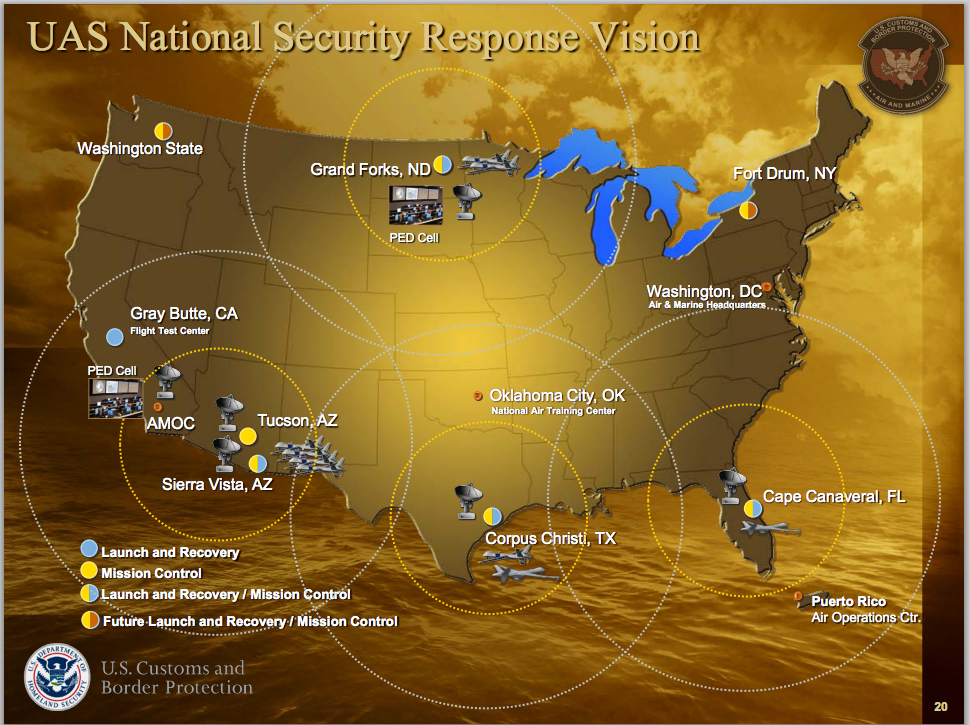 Most of the concern about the domestic deployment of drones by DHS has focused on the crossover to law-enforcement that threaten privacy and civil rights—and without more regulations in place will accelerate the transition to what critics call a “surveillance society.” Also worth public attention and congressional review is the increasing interface between border drones and national security and military operations.

The prevalence of military jargon used by CBP officials—such as “defense in depth” and “situational awareness”—points to at least a rhetorical overlapping of border control and military strategy. Another sign of the increasing coincidence between CBP/OAM drone program and the military is that the commanders and deputies of OAM are retired military officers.

The vague concepts of homeland security and border security facilitate the creep of the CBP/OAM drone program. Nothing appears off-limits as to how these Predators and Guardians may be used at home or in the “near abroad”—in the Caribbean, Mexico, and Central America.

In a presentation to the National Defense Industrial Association in October 2012, OAM chief Michael Kostelnik explained other ways in which the “US are the leading edge of homeland security.” As these “US operations continue to expand and mature,” the homeland security drone program is providing “rapid contingency deployment supports” for “federal/state/local missions.” What is more, the “CBP US deployment vision strengthens national security response capability.”

Michael Kostelnik, who DHS hired in 2005 to direct OAM, rose to the rank of Major General in the US Air Force, and as director of the Air—had a direct role in Air Force’s central role in developing the Predator and then arming it with Hellfire missiles. So, it is easy to understand how the retired Major General—who left OAM in December 2012— regarded the US program he directed as the leading edge in the integration of homeland security, border security, public safety, and national security.

Typical of his big picture concept of homeland security, Kostelnik told the Defense Systems Journal that OAM had the most advanced USfleet operators who could, at a moment’s notice, be “CHOP’ed”—Change in Operational Command—to military control.

In January 2013, CBP brought in another retired military officer to direct OAM. Like Kostelnik, Randolph Alles, the new OAM director, was also a point person for UAVs as a major general in the US Marine Corps.
Posted by Tom Barry at 7:21 AM
Email ThisBlogThis!Share to TwitterShare to FacebookShare to Pinterest

As a Private Investigator I have been called upon to carry out investigations to locate and prove that firms or individuals are manufacturing or supplying goods without the license-holder’s consent.
Cheap LOL Boost
Cheap LOL Elo Boost