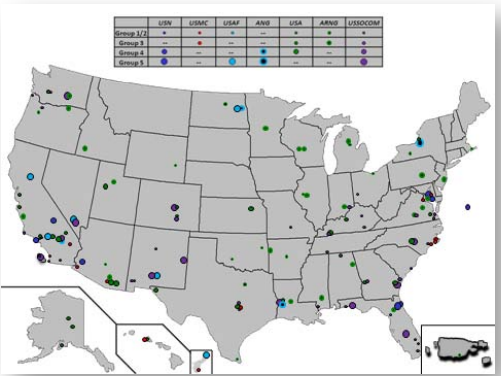 DOD Projection of U.S. military drone bases in the United States by 2017

According to OAM chief Kostelnik, CBP planned a “Spring 2011 deployment of the Guardian to a Central American country in association with Joint Interagency Task Force Florida.

JIATF-South is a subordinate command to the United States Southern Command (USUTHCOM), whose geographical purview includes the Caribbean, Central America, and South America.

In mid-2012, CBP/OAM participated in a JIATF-South collaborative venture called “Operation Caribbean Focus” that involved flight over the Caribbean Sea and nations in the region—with the Dominican Republic acting as the regional host for the Guardian operations, which CBP/OAM considers a “prototype for future transit zone US deployments.”

CBP says that OAM drones have not been deployed within Mexico, but notes that “OAM works in collaboration with the Government of Mexico in addressing border security issues,” without specifying the form and objectives of this collaboration.

As part of the US global drug war and as an extension of border security, unarmed drones are also crossing the border into Mexico. The US Northern Command has acknowledged that the US military does fly a $38-million Global Hawk drone into Mexico to assist the Mexico’s war against the drug cartels.

Since its creation in 2003 DHS has adopted military and security frameworks for its immigration and border control programs. This is especially evident in its drone program, which, like many other DHS agencies, is directed by former military officers. However, as the drone program clearly demonstrates, the actual operations, while framed as security

missions, are entirely focused on hunting down illegal immigrants and seizing meager sums of marijuana.

The post-9/11 attention to “homeland security,” “border security,” and “national defense” (defense of the homeland by the military) has contributed to the continuing erosion of the dividing lines between domestic and military affairs, between public safety and national security.

Tom Barry directs the TransBorder Project at the Center for
International Policy. Barry is the author of numerous books about US foreign policy and Latin America. His most recent book is Border Wars (MIT Press, 2012)
Posted by Tom Barry at 6:16 AM
Email ThisBlogThis!Share to TwitterShare to FacebookShare to Pinterest