The traits of a failing state – loss of control over national territory, inability to provide public services, loss of monopoly on legitimate use of violence or physical force, and widespread corruption and criminality – are increasingly recognizable in many areas in Mexico. This is the case not just along the northern border – from Baja California to Tamaulipas – but also in such states as Guerrero, Durango, and Sinaloa.


It would certainly be inaccurate, at this point, to describe Mexico a failed state. Yet a serious discussion about the degree to which the Mexican state controls national territory, protects its citizens, and ensures governance is not premature.


The questionable legitimacy of the 2006 election that put him in Los Pinos may have been a factor in the decision by President Felipe Calderón to launch the war on drugs. His launching of the war on drugs burnished Calderón’s credentials as a strong leader and tough national security chief, much like Colombia’s Alvaro Uribe.


But political opportunism alone doesn’t adequately explain Calderón’s decision to launch the war on drugs and join a security alliance with the United States. On becoming president in 2006, it is likely that Calderón understood that Mexico was for the first time facing an existential threat in the form of narco-violence and the penetration of organized crime organizations.


As the date for the 2012 presidential election presses closer and as the failure of the Mexico’s drug war deepens, Mexico’s future is on the line.


But the options for stabilizing and securing the Mexican state are limited.


Political Parties on the Sidelines


On both the left and the right, Mexico’s political parties have little to offer in the way of a serious reform agenda.


The conservative National Action Party (PAN)’s traditional vision of a rule-of-law, citizen rights, free enterprise, corruption-fighting, and morality-centered government no longer inspires as it once did. After nearly two-decades in various positions of municipal, state, and federal power, PAN’s identity as a white knight coming to rescue the state from PRI domination and a corrupt, increasingly dysfunctional system no longer resonates.


Similarly, the Party of the Democratic Revolution (PRD) and other left parties suffer from their collective history of infighting, their practice of spouting of tired leftist dogma, and their lack of achievements.


Poised for a major political comeback in the 2012 presidential election, Institutional Revolutionary Party (PRI), which has been out of power since 2000, seeks to tap anti-incumbent voter sentiment and nostalgia for a PRI-dominated era remembered by many as being more stable and secure, and even more prosperous.


When compared with the political and governing practices of the last century, Mexico’s political scene may seem refreshing dynamic and transparent. There are now multi-party elections and unprecedented electoral transparency.


Nonetheless, there is a deepening sense that Mexico is stagnating politically, and even seems to be moving backward.


The PRI, which holds 19 of the country’s governor seats, is also the dominant force in Congress, holding 237 seats, with PAN occupying 146 and PRD having just 71. Not only is PRI forwarding a presidential candidate who is nationally well-known and well-regarded – Mexico state governor Enrique Peña Nieto – but it will also embark on its presidential campaign with an appealing anti-incumbent message.


What is more, the PAN-PRD coalition (which obstructed PRI’s plan to make a clean sweep of the 2010 gubernatorial races) will not be an obstacle in the presidential election, since neither the PAN nor PRD is likely to agree on a common candidate given their sharply different political views and party platforms.


Although PRI will take full advantage of anti-incumbent voter sentiment, the party holds out little hope that it will champion a reform agenda to tackle the country’s severe problems.


No longer do the narcotics trafficking organizations seek control only of the trafficking routes into the U.S. market. They and their subsidiaries also ferociously compete for control of the rapidly expanding domestic drug markets, mainly for crack cocaine and methamphetamines.


The most ominous difference, however, is that the old drug trafficking organizations are now diversified operations. They have become mafias or organized crime organizations, whose interests include a wide array of illegal and legal businesses.


Politicians and parties are no longer the overlords that establish the terms of the deals under which drug cartels operate in Mexico. Instead, they are regarded as the pawns, puppets, and instruments of the new crime organizations. 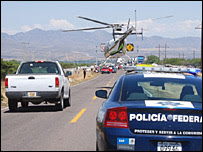 
It is no wonder, then, that the United States is reevaluating its security threat assessment of Mexico.


In a September 2010 speech at the Council on Foreign Relations in Washington, Secretary Hillary Clinton shocked many with her frank assessment of the gravity of Mexico’s security crisis and her consideration of a more ambitious plan to contest the power of organized crime.

"We face an increasing threat from a well-organized network, drug-trafficking threat that is, in some cases, morphing into, or making common cause with, what we would consider an insurgency," Clinton said. While both the Bush and Obama administrations endeavored to sharply differentiate the Merida Initiative from Plan Colombia, Secretary Clinton explicitly compared the present crisis in Mexico to Colombia’s campaign in the 1990s against that country’s narcos and its narco-financed leftist guerrilla insurgency.
Clinton raised the possibility that the United States, Mexico, and the Central America nations may all need to cooperate in an “equivalent” to Plan Colombia, the multibillion dollar campaign of military aid and counternarcotics assistance launched during the Clinton Administration.
It is widely accepted that Plan Colombia did help eliminate the dominant drug cartels and significantly weaken the leftist insurgencies, albeit with a less successful records in obstructing cocaine flows or diminishing human rights abuses by the military and right-wing militias. Plan Colombia, which gradually merged the fight against narcotrafficking and the leftist guerilla army FARC, has been widely criticized for sparking increased human rights violations and for bolstering military impunity.
According to Clinton, "[I]t's going to take a combination of improved institutional capacity and better law enforcement and, where appropriate, military support for that law enforcement... to prevent this from spreading and beat it back." Clinton maintained that Plan Colombia “worked” and added, “We need to figure out what are the equivalents for Central America, Mexico and the Caribbean.
Clinton’s statement signaled that Washington was increasingly considering the power and violence of Mexico’s crime organizations not simply as a drug war concern but as an existential threat to Mexico.
The problem is that there is no apparent plan – either coming from Mexico or Washington, or jointly – about how to best confront the power of the Mexican-based organized crime organizations.
The United States has no apparent interest or appetite for direct intervention, even if requested by Mexico – as improbable as that may be. It’s highly unlikely that the U.S. Congress, especially one where the House is controlled by Mexican-bashing Republicans, would accede to any administration request for vastly increased military and other spending in Mexico, along the lines of another multi-billion dollar Plan Colombia.
As the State Department cables indicate, there is deepening concern among U.S. officials that its Mexican partners are not sufficiently modernized, united, or committed to waging an effective campaign against the country’s organized crime forces – a fight that would necessarily also entail a frontal assault on official corruption and impunity.
It does appear – in the evolving official assessments of drug war, op-eds in Mexico City papers, and elsewhere – that the Mexican government, business community, and citizenry are slowly beginning to acknowledge that this crisis is about much more than widespread delinquency and inter-cartel violence.  Territory is being lost, politicians are being killed and kidnapped, and the power balance between the state and organized crime may be shifting in favor of the syndicates.
The country’s political parties, however, are narrowly focused on short-term political gains. In the country’s center of power and population – Mexico City – the crisis is still largely regarded as one limited to distant regions deemed of only marginal relationship to the economic and political course of the country.
The reflexive blaming among many Mexican sectors of the United States for the spread of narco-violence and organized crime also militates against any honest evaluation of the stability and viability of the Mexican state.
The debate over whether Mexico is deteriorating into a failed state is a fascinating one. But it may distract from the pressing challenge of formulating new social and political options for staunching the rise and the territorial ambitions of organized crime in Mexico.
Posted by Tom Barry at 11:35 PM
Email ThisBlogThis!Share to TwitterShare to FacebookShare to Pinterest
Labels: Mexico Failed State