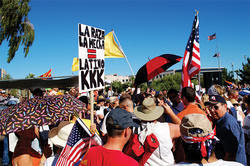 The Arizona backlash story needs to be told.

Arizona is a social and economic cauldron. The state’s unusual demographics, boom-bust conditions, and home-grown right wing have served up a poisonous mix of border-security and immigration-enforcement fanaticism.

In addition to a spate of state immigration- and border-control initiatives, Arizona has produced a cast of crackdown heroes – Sheriff Joe Arpaio, Sheriff Paul Babeu, Sheriff Larry Dever, State Senator Russell Pearce, Governor Jan Brewer, among others – that have tapped uninformed fears of immigrants and Mexicans.

But what makes Arizona such a breeding ground for conservatives, backlash populists, and assorted reactionaries? What are the factors that have put Arizona at the leading edge of the country’s anti-immigrant backlash and fear-mongering about border security?

Recently, the Phoenix New Times, which for decades has countered right-wing extremism in Arizona with excellent investigative reporting and commentary, tackled the question of what’s driving the anti-immigrant legislation and organizing in Arizona. And it found the answers -- not in Arizona but in Petoskey, Michigan and in Washington, DC.

Both the New Times and Terry Greene Sterling (who describes herself as “Journalist, Author, White Woman in the Barrio” on her personal website) should be ashamed.

Instead of attempting to tell the untold story of the anti-immigrant backlash in Arizona, the writer and the weekly tabloid recycled oft-reported facts about the key role of the Federation for American Immigration Reform (FAIR) in formulating the SB 1070 legislation. To tell her story of outside powers driving local politics, the author also recycled the legend of “Tanton Network.”

In their attempt to delegitimize the restrictionist institutes – and by extension all those who believe the immigration should be more strictly limited -- leading immigrant rights groups have promoted a conspiracy theory called the Tanton Network. That’s what they call the three leading Washington Beltway restrictionist institutes – FAIR, NumbersUSA, and Center for Immigration Studies – that have past or present ties to John Tanton, the environmental and anti-population growth activist who lives in remote northern Michigan. 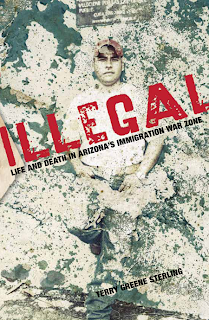 In its willingness to slander and smear, in its facile use of facts, and in its sloppy analysis, the disjointed piece by Greene Sterling has more in common with the anti-immigrant rants found in online comments sections than with the kind of constructive investigative often published by New Times.  It’s wretched journalism that unfortunately undermines the reputation of Greene Sterling, who is the author of a new book titled Illegal: Life and Death in Arizona’s War Zone.

The piece, which poses as investigative journalism, might be better considered as an ammunition dump. Depending,  apparently, on the assumed allegiances of progressive New Times readers, Greene Sterling, serves us page after page of bits of information and misinformation -- designed not to shed light on what’s happening in Arizona but to confirm conclusions that it is all a right-wing conspiracy.

For those on the attack against SB 1070 and its supporters, the Greene Sterling piece is loaded with easily dispensed ammunition about the great right-wing conpsiracy. It’s backlash against backlash. Worse yet, the ammunition she passes out is old and second-hand.

She doesn’t look around her own home state for social, economic, or demographic reasons that may explain why a majority of Arizonans support SB 1070. Instead, she posits that Russell Pearce  (a “populist”, really?) and other Arizona right-wing figures depended on information from a network of “white nationalist hate groups” to make their case for state-directed border security and immigration crackdown initiatives.

She asserts that “Brewer, Pearce, and practically every other Arizona illegal-immigration politico relied” on a FAIR report on the costs of illegal immigration in Arizona to get elected. But where is the evidence that this report was so very influential?

Clearly, the three organizations – especially FAIR -- have associated themselves, at times, with white nationalists and other despicable individuals in their coalitions to stop “mass immigration” and “amnesty” over the past three decades.  Just as clearly, when this does happen, it merits strong criticism.


However, Greene Sterling -- following the lead of the Southern Poverty Law Center (SPLC) as well as Americas Voice, Center for New Community, and the National Council of La Raza -- doesn’t offer thoughtful critiques of the current policies and statements of the Tanton Network organizations. Instead, she slanders, smears, and recklessly labels these organizations – and their members -- as white nationalists, white supremacists, and hate groups. In the process, Greene Sterling and the New Times have thrown aside the basic principles of journalism and the ethics of responsible public speech. 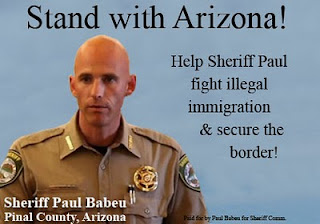 It’s true that Arizona, as Greene Sterling writes, serves as “an experimental legal laboratory for FAIR, a place to test increasingly harsh laws.” But that is an old story – already told by many other reporters and news outlets. Rather offering a collection of old facts, half-truths, and myths, why didn’t Greene Sterling examine why Arizona has proved such fertile ground for FAIR and for home-grown proponents of immigration crackdowns?

“Tanton's Zero Population Growth movement,” notes Greene Sterling, “helped influence a reduction in the size of American families. Even so, the U.S. population soared from about 225 million in 1982 to more than 307 million in 2009, in part because immigrant babies have bolstered the birth rate Tanton has labored so hard to reduce.”

But rather than give credence to any of the anti-population growth arguments, such as resource depletion and environmental sustainability, she sets up the population argument for restrictionism to reflexively knock it down.

Dismissing the population/immigration conclusions of many leading immigration restrictionists, Greene Sterling assures us that these population-explosion arguments shouldn’t worry us. After all, “the U.N. reports that the world population may stabilize by 2300 because fertility rates are trending downward.” Perhaps, but at what unsustainable level?

She contends that “many population experts say this is a good thing, that immigrant babies will become the workers who pay taxes to provide social services for the aging American population.”

True, many economists do agree that immigration growth does contribute positively to economic growth, and there is also widespread agreement that cheap immigrant labor could meet the demand for elderly care. But should immigration policy be determined solely on the market mechanisms and GDP rates?

There’s no acknowledgment that some of the population/immigration arguments of the restrictionist institutes might merit examination, such as their contention that immigration policy must consider the impact on population growth, environmental sustainability, and a society’s capacity for integration –. This is not say, of course, that such concerns are what motivate the activism of Pearce, Brewer, Babeu, Arpaio, and other immigrant-bashing Arizona politicians.

Greene Sterling characterizes former Arizona Republic reporter Jerry Kammer as an apologist for white-nationalist restrictionists. She claims that Kammer, a Pulitzer Prize-winning journalist who is currently a fellow at the Center for Immigration Studies, participated in the convening of a CIS panel that aimed to “discredit the SPLC.” According to Greene Sterling, Kammer “bashed the organization” but at the same time “sought to distance himself from Tanton.”

She quotes Kammer as saying that Tanton "has a tin ear for the sensitivities of immigration" and is a “’distraction’ in the immigration movement” because he "sometimes speaks with a freewheeling bluntness that even those who admire him find upsetting."

Nowhere in her own free-wheeling reporting does Greene Sterling mention Kammer’s 27-page report, Immigration and SPLC: How the Southern Poverty Law Center Invented a Smear, Served La Raza, Manipulated the Press, and Duped its Donors. Complete with 147 reference notes, the CIS report is everything that the Greene Sterling report is not – assiduously researched, professionally written, and thoughtful.

Clearly, FAIR and Tanton are deserving of much criticism for their narrow, mean-spirited restrictionism. But criticism and bashing are entirely different, and the New Times article is a good example of the latter – where character assassination, guilt by association, and a disregard for facts and truth prevail.
Greene Sterling accepts the widespread characterization among progressive immigration activists that the three organizations in the “Tanton Network” – FAIR, NumbersUSA, and CIS – are “hate groups.”

Labeling an organization a “hate group” is a serious matter because it implies they promote “hate crimes.” Blithely implicating a respected reporter as an instrument of a hate group isn’t something one would expect of a respected news organization like the Phoenix New Times.

Greene Sterling asserts – with no attempt to document – that “several human rights organizations have flagged FAIR, NumbersUSA, and CIS as white-nationalist hate groups.” It is true that SPLC did recklessly label FAIR as a hate group in late 2007.

But NumbersUSA and CIS were not included in that hate-group labeling by SPLC, as the author implies. What “human rights organizations” have charged that FAIR, NumbersUSA, and CIS are “white nationalist hate groups”?

(SPLC, it bears noting, is not a human rights organization but a self-described defender of “civil rights.”)

The SPLC doesn’t, as Greene Sterling implies, call FAIR a “white nationalist hate group” but rather a “hate group” with ties to white supremacists.

Phoenix New Times readers might be interested in the observations of Carol M. Swain, Professor of Political Science and Professor of Law at Vanderbilt University and author of The New White Nationalism in America, about reckless hate-group labeling.

In her Oct. 12, 2009 article on Huffington Post, Guilt by Association: The Southern Poverty Law Center Hurls a Punch, Swain observed:

“The SPLC needs to rethink its mission and the impact that its attacks can have on individuals who are limited in the means available to defend themselves. An organization with the rich history of the Southern Poverty Law Center should be above ad hominem attacks, guilt-by-association smears, and the never-ending search for red herrings."

In the immigration policy debate in Arizona, FAIR is not a red-herring but a very influential player, as Greene Sterling details. By implying, however, that FAIR and all those associated with the Tanton Network are white nationalists and hate groups, Greene Sterling resorts the tactics that she excoriates.

Readers don’t need a conspiracy theory and guilt-by-association name-calling to understand that the Federation for American Immigration Reform is less than fair, less than reasonable. Simply laying out FAIR’s uncompromising position on all liberally initiated immigration reforms, including most recently the eminently fair and smart DREAM Act, should be enough to explain the narrow-minded, heartless politics of FAIR and other restrictionists.

“Russell Pearce and Other Illegal-Immigration Populists Rely on Misleading, Right-Wing Reports to Scapegoat Immigrants and to Terrify Penny-Pinched Americans” is yellow journalism.

Such reporting is not conducive to fostering constructive discussions about the future of immigration reform and immigrants in Arizona.

Center for Immigration Studies Strikes Back

Real and Hidden Agenda of Restrictionists