Last year, a year after the immigrant inmates at the Reeves County Detention Center in Pecos, Texas rioted, the ACLU of Texas and Austin-based Grassroots Leadership, sponsored a protest march and vigil to bring attention to the prison conditions.


The march from the Reeves County Courthouse to the 3,750-bed prison on the outskirts of this remote West Texas town was ignored by all but a few media outlets. At the vigil outside the prison, family members of inmates of the prison operated by the corrections giant GEO recounted stories of medical neglect and abusive treatment suffered by sons and brothers.


The twenty or more protesters were all outsiders – most of whom had traveled a couple hundred miles to express their concern and solidarity. In Pecos, the prison is the main source of jobs. Reeves County, which built the detention facility in 1988, regards the prison as a major source of revenue. Any criticism of the prison in Pecos is considered an existential threat.


If the prison were to close, more than four hundreds of jobs would dry up, the county government would be left bankrupt, and the county's 31% poverty rate would climb.


Pecos, the county seat, is already a sad, forlorn place. Since the late 1940s it has suffered from a succession of economic busts, starting with the army's bomber training base closing. As the water table dropped, the cotton farms and mills shut down. In the 1990s, the sulfur mine on the county's western edge closed, and the food processing plant in Pecos moved operations to Mexico.


The oil wells around Pecos stand still. The railroad, which put the town on the map in the late 1880s, still runs through town, and at night you can still hear the whistle blow. But the train doesn't stop in Pecos anymore.


In the mid-1980s the county government invested in prison industry. Using project revenue bonds, it expanded the county jail and began renting bed space to state government and the feds. Since 1988 the detention center has undergone three major expansions, all financed by tax-exempt revenue bonds the county offered to major investment houses.


The county still owns the prison, and it has more than $120 million in outstanding prison debt. While the Reeves County Detention Center – a sprawling complex of three units – is still public property, it is operated through contracts and subcontracts with private partners.


Through what are known as Criminal Alien Requirement (CAR) contracts, the Bureau of Prison – an agency of the U.S. Department of Justice -- contracts the county to house and care for immigrants who have been criminally charged and sentenced. The county subcontracts with GEO Group to operate and manage the immigrant prison and with Physicians Network Association (PNA) to provide health care to the immigrant inmates.


It's not that the flow of immigrant inmates is drying up. New policies at the Department of Homeland Security that criminalize illegally entry into the United States have flooded federal courts with immigrant prosecutions, and BOP has since 2001 issued CARs to private prison firms and local governments like Reeves County for immigrant imprisonment.


Once completing their sentences, generally under five years, immigrant inmates are transferred from BOP-supervised prisons to detention centers supervised by the Immigration and Customs Enforcement (ICE), a DHS agency that process the immigrants for deportation. These detention centers are generally operated by private prisons firms like GEO. For each of the past seven years, ICE has reported record highs in the number of immigrants detained and removed – with approximately 290,000 in 2009.


The problem, then, is not that Pecos is facing a shrinking market of prisoners to lock up for pay. The problem is a dead immigrant, Jesus Manuel Galindo, who died in isolation from an epileptic seizure at the Pecos prison on December 12, 2008.


His death set off two prison riots – one that erupted the day his body was discovered, and one a month later. The damage caused by the riots obligated the county to issue $40 million in new revenue bonds to pay for the prison renovation to meet BOP standards. At the county meetings following the prison disturbances, the commissioners and county administrators expressed no concern about prison conditions. The concern was how much it was going to cost the county.


Now comes a new threat to the economic stability in Reeves County.


The ACLU of Texas together with an El Paso private law firm has filed a massive law suit on the behalf of Galindo's family against Reeves County. Also named in the wrongful death lawsuit are BOP, GEO, and PNA, as well as individuals at each of these entities. The complaint, filed in West Texas district court in Pecos, states: "All four entities involved in Mr. Galindo's custody and care—PNA, GEO, Reeves County, and BOP—bear legal and moral responsibility for his utterly preventable death."

"Galindo had been held in solitary confinement for one month before he died as punishment for complaining that his seizure medication was not working. He suffered at least two seizures while in isolation during that month, and repeatedly asked medical and prison staff to adjust his medication and move him out of solitary so that he would not be alone when he seized. Galindo ultimately suffered a fatal seizure during the night and died alone, unattended and undermedicated—exactly as he feared he would in the anguished days and weeks preceding his death. RCDC prison and medical staff discovered his body the following morning in rigor mortis."

Galindo is survived by four minor children, three of whom are U.S. citizens, and by his parents and two siblings, all legal permanent residents living in Anthony, New Mexico. A Mexican national from Juárez, Galindo was serving a 30-month sentence for illegal reentry -- which, as the law suit notes, is a nonviolent crime that until a few years ago was not aggressively prosecuted."


Media reports, including major investigative pieces published by the Boston Review and the Texas Observer, attacked some public attention to the poor conditions and the related economic underpinnings of immigrant imprisonment.


But the new legal complaint, which includes a detailed chronology of Galindo's mistreatment and suffering at the hands of the four-way prison partnership, must have Galindo's jailors frantically consulting with their respective lawyers about how much this will cost them.


It seems certain that the lawsuit will result in either a massive settlement or court award. The plaintiffs are demanding a jury trial on ten claims for action. As the legal complaint, which was filed in Pecos on December 7, makes clear, the responsibility for Galindo's horrible death rests not only with the four prison partners – Reeves County, GEO, PNA, and BOP – but also with the system of immigrant prison outsourcing.


The 92-page complaint is modern American horror story. According to the plaintiffs, "The utter disregard shown by RCDC, prison and medical staff to Galindo's repeated, beseeching, well-founded expressions of fear for his own personal safety bordered on sadistic." 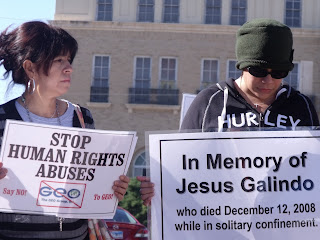 He was tortured to death by the bureaucracy of immigration enforcement, by the drive for profits, by a criminal justice system that criminalizes and victimizes immigrants -- and by a small West Texas town trying to survive.


(Next: The Chronology of a Death in Texas)
Posted by Tom Barry at 4:02 PM
Email ThisBlogThis!Share to TwitterShare to FacebookShare to Pinterest
Labels: Reeves County Detention Center

Unfortunately this sad story - though true and troubling - garners scant attention among our populace.

When a story or account includes the word(s): criminal, inmate, convict, prisoner, or illegal immigrant most go to another article. There is just mo public interest in prisons or those whom they house. No one is willing to look beyond the terms "prisoner" or "inmate" to discover what those in the story did to become one.

Corporate interests have driven the increase in incarceration for profits. This drive has entailed many new laws, enhancements to laws already on the books and a restructuring of gain time and parole laws, designed to keep a person locked up for the longest to wring the most money out of the public.

SB 1070 exemplifies this quest for profits without regard for what that quest will do to those they intend to "house". State and federal detention facilities and staff have a responsibility to provide "Care, Custody and Control" of those in their facilities. Private facilities operated by the likes of CCA and Geo Group quickly drop the "care" from their responsibilities as that costs them too much and affects their bottom lines.

This article relates to the current arguments over the choice of Stacia Hylton as the Director of the U.S. Marshal's Service. With close ties to both CCA and Geo, she represents a good ally within a government agency that contracts with CCA and Geo, among other prison corporations. It is all simply profit driven and men and women such as Mr. Galindo are considered collateral damage resulting from reduced care or medication to save money.