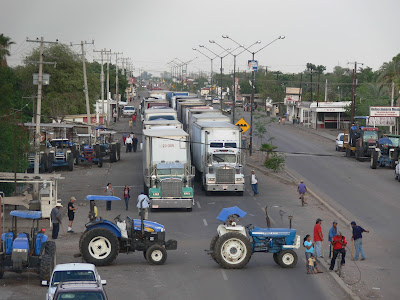 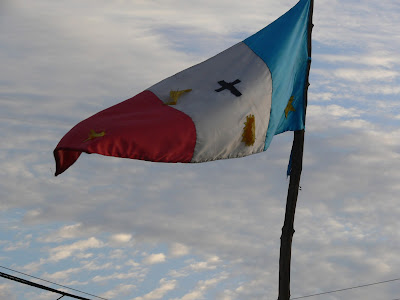 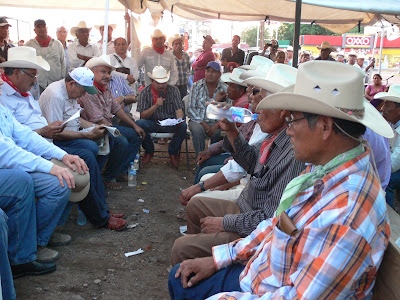 Over the past four centuries, the Yaqui have routinely suffered the loss of their land, water, and autonomy despite fierce resistance. Throughout Mexico, the militancy of the Yaqui in the face of Spanish, U.S. and Mexican incursions and occupations is legendary.

Even in Sonora, where the Yaqui have suffered campaigns of removal and extermination, they have achieved iconic status. Sculptures and images of Yaqui deer dancers are found everywhere in tourism promotion, on state highways, and on state buildings.

The persistence of Yaqui demands for independence and of their resistance to attempts by investors and colonizers to occupy the Yaqui valley led to these military campaigns to eliminate the Yaqui. The wars against the Yaqui, especially during the Porfiriato (1876-1910), were, in effect, ethnocide campaigns. It wasn’t until a decade after the Mexican Revolution (1910-1917) that the Yaqui resistance was finally crushed in the revolutionary government’s 1926-1929 military campaign.

It is likely that Yaqui history from 1876 to 1930 could have been written as if the Mexican Revolution never happened. Porfiriato or revolution, the repression of the Yaquis was driven by the same historical forces and even a similar social context. It was a process in which ‘civilization’ yanked the tribe from the most fertile lands in Sonora and broke their resistance with a war with mercy whose goal was eradication and extermination.”[i]

Novelist and historian Paco Ignacio Taibo II, who wrote the recent book Yaquis: Historia de una guerra popular y de un genocidio en México (Yaquis: History of a Popular War and Genocide in Mexico), said: “Through all the years I have spent exploring Mexico’s past, I have found infamous and tragic stories but of them all, the history of the Yaquis is at the same time the worst and the most glorious.”

Ciudad Obregón, which emerged as the center of the anti-aqueduct coalition, was named in honor of the revolutionary general and president Álvaro Obregón— but the original name of the settlement was Cajeme, the name the war name of the Yaqui leader Jose María Leyva. Cajeme led the Yaqui resistance against the Porfírio Díaz regime until he was executed in 1887. Cajeme remains the name of the county that includes Ciudad Obregón and several Yaqui towns. As president of Mexico, Obregón (who was born in the Mayo delta) played a key role in opening the Yaqui valley to foreign agricultural investors.

By some measures, the Yaqui have fared better than other indigenous people in Sonora and elsewhere in northern Mexico. Dozens of other native groups no longer exist or whose small numbers presage eventual extinction. Today, about 30,000 Yaquis inhabit the Yaqui Valley, roughly the same number the Jesuits encountered in the early 1600s. Other Yaqui live scattered throughout Mexico and the United States, including the Yaqui community of Pascua outside of Tucson.

From a certain perspective, the Yaqui have emerged over the centuries as victors since they first repelled the Spanish. Their victories— maintaining their language, gaining rights to a large part of their traditional homeland, and winning guarantees of their rights to half of the water flowing in the upper Yaqui river basin— set them apart from most other indigenous communities in Mexico.[ii] One has only to witness a meeting of Yaqui communities presided over by their gobernadores (governors) in their native Cahitan language to appreciate their endurance and determination. They maintain rights to one of the most coveted farming regions of northern Mexico despite the long history of occupation, including deportation campaigns, massacres, and enslavement in rubber plantations of Chiapas.

But survival is a low measure of success. Relative to dominant mestizo and ladino (white elite) Sonoran society, the Yaqui are a marginalized people whose future prospects are grim. Unemployment is more than 70%, and 85% of Yaquis are impoverished. Few Yaqui have more than sixth-grade education. Infectious diseases, cancer, skin rashes, and digestive disorders run rampant through Yaqui communities. Many factors explain the social marginalization and impoverishment of the Yaqui people, mirroring more or less the same desperate circumstances facing most of Mexico’s indigenous population. But socioeconomic studies aren’t necessary to identify a central factor in keeping the Yaqui on the margins of the economic development that surrounds them.

Since the late 1930s, the Yaqui have generally acceded to the government’s modernization projects. The pacification of the Yaqui dates back to the initiatives of the Lázaro Cárdenas administration (1934-40) that included dams, agrarian reform and nationalization of foreign enterprises. Key to the government’s success in pacifying the Yaqui were two decrees by President Cárdenas: 1) granting the Yaqui title to 5,500 square kilometers (3,418 miles) of land, stretching from near Ciudad Obregón north to Guaymas; and 2) granting the Yaqui rights to half of the water to be captured by the La Angostura dam and reservoir.

As anthropologist Tonatiuh Castro Silva noted: “The Cardenista restitution of Yaqui territory in 1937-40 constituted a dike against an eventual armed rebellion.” But the “inconsistency” of the state’s position with respect to the Yaqui, he observed, with respect to both land and water rights, has amounted to a major deception that might lead to social explosion. Castro observed that Yaqui land rights have been violated, the promised “half of La Angostura never came,” and the Yaqui River is nothing but puddles— and no longer deserves to be called a river.[iii]

Illustrative of Yaqui acceptance of projects that adversely affected their land and water rights was the 1991 agreement by the Yaqui leadership to permit the construction of the Yaqui-Guaymas aqueduct. In exchange for the promises that the government made to provide Yaqui communities with potable water, the Yaqui leadership, with minimal dissent, consented to a CONAGUA-funded project to drill a battery of water wells on Yaqui land to supply water to water-starved Guaymas, Empalme, and San Carlos. So when the federal, state, and local governments proceeded with plans for the Yaqui Valley-Guaymas aqueduct in the 1991, there was only scattered opposition.

For the most part, the Yaqui communities have access to piped water. But the water is not purified, and is contaminated with agrochemicals, arsenic, and nitrates.  Simply because there are water pipes, it doesn’t mean that water flows to Yaqui households.

One third of those interviewed reported that there was never enough water— a problem that always gets worse during droughts. Referring to decades ago, Yaqui people interviewed by Colegio de Sonora researchers said: “Before there was never shortages of water but no longer. Now we have to struggle for water. It is contaminated with arsenic [according to the Instituto Tecnoloógico de Sonora], and isn’t drinkable. We lack water in our homes and in our communities, and it is for the lack of water [in the river and in the overexploited aquifer] there are hardly any trees anymore.”[v]

The Mayo people echoed Yaqui complaints about water availability and quality. They said that they now need to buy water to ensure that they don’t get sick, and that all the water in the wells, river, and irrigation canals is contaminated. In dry times, they claimed that the aquifer shrinks and that the water pipes get clogged with dirt.

Another finding of the Colegio de Sonora report on indigenous communities and water was a condition that is readily observable in the deltas of the Colorado River (the traditional homeland of the Cucapás), Yaqui River, and Mayo River. “What stands out is access to land, which has fallen under the dominance of an agroindustrial type of development.” They note that water is the cross-cutting theme of indigenous survival and identity in Sonora.

In marked contrast to the construction of the Yaqui Valley-Guaymas aqueduct, the Yaqui and the members of the Yaqui Valley Irrigation District reacted immediately and in unprecedented unity to the announcement of the planned Novillo-Hermosillo aqueduct. The Citizens Water Movement, based in Ciudad Obregón in southern Sonora, counted on the economic and political clout of the agribusiness sector of the Yaqui Valley.

The north and south highway blockades of Vícam formed the frontlines of the Yaqui water war. Despite tremendous economic and political pressure to let the traffic and commerce flow freely, the Yaqui together with their allies in the “No al Novillo” coalition refused to accede, keeping up the blockades even when summer temperatures soar to 110 or 120 degrees or more. The militant Yaqui opponents of the aqueduct have continued the traffic blockades despite the unfavorable court rulings and the deflation locally and nationally of the anti-aqueduct movement and coalitions.

This water war also played out on numerous other fronts, each of which sheds light on the shadows that obscure and diffuse the rule of law and democratic governance in Mexico.