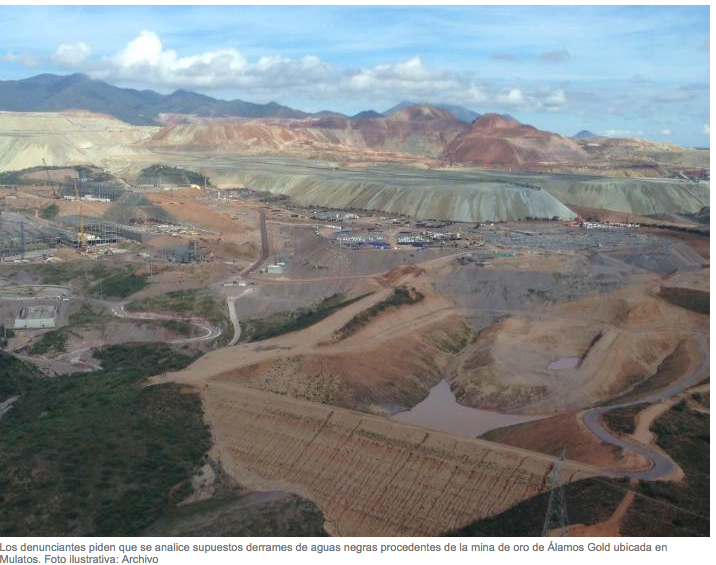 For the most part, the focus in the aftermath of Cananea environmental disaster was on the impact on the residents and agricultural economy of the upper and mid Sonora River basin.  Wells for drinking water and for irrigation were contaminated, and the some 25,000 residents of the valley were left without drinking water while farmers and ranchers had no well water or river water to irrigate their crops or water their cattle.

But the repercussions of the mining industry’s “worst natural disaster” quickly extended far beyond the contamination of upper and mid Sonora River basin. With a day or two, both sides of the Yaqui water war were reconfiguring their arguments for and against the Novillo-Hermosillo aqueduct that transfers as much as 75 Mm3 of water from the Yaqui River to Hermosillo. For its part, Sonora’s mining sector rejected the assertion that the tailings pond break was a major environmental disaster.[2]

When the newly elected governor Guillermo Padrés Elías announced in early 2010 that the state government was building an aqueduct from the Yaqui River he ignited a water war. The social and economic sectors of Hermosillo were thrilled, but the leading voices of the urban and farm sectors in the Yaqui River Valley vehemently objected, as did the a large and militant sector of Yaquis. [3]

The Yaqui Water War cannot be fully understand without probing the history of Sonora’s hydraulic society, the failure to recognize the water rights of the Yaquis, and the population and agricultural boom in desert regions of Sonora, and the power politics of water distributions. But also important are the natural factors that contribute to rising tensions.

Most important is geographical context for Sonora’s hydrology. Neither surface war nor groundwater is distributed equally in Sonora. Climate change – manifest in more prolonged and more intense droughts and in higher average temperatures – compounds the tensions building around the distribution of Sonora’s increasingly scarce surface water.

Social and political tensions escalated in 2011 when the anti-aqueduct Yaquis began mounting intermittent blockades of Highway #15, a four-land toll road that takes truckers and cars from the border town of Nogales to Mazatlán, and then southeast to Mexico City. The aqueduct reached Hermosillo in mid-2013, although construction on the planned final section called the Ramal Norte that will deliver Yaqui River water to the northern edge of Hermosillo had not begun as of October 2014.

The anti-aqueduct protests that began in May 2010 have continued despite the completion of the aqueduct’s main segment that brought Yaqui River water to southeast Hermosillo. Tensions rose to a new level in mid-2014 after the arrest by the state police of two leaders of the Yaquis’ anti-aqueduct campaign – actions by the state’s justice department that were widely condemned as retribution by the state government and another attempt to crush the anti-aqueduct movement among the Yaquis.

The August 2014 mining disaster had the result of hardening the positions of the two sides. In Hermosillo, the break in the tailings pond was alarming for many reasons. At first it was mostly a concern about how close to the city the toxic war had come.

Soon media attention and political disputes brought the public’s attention to fact that copper mining in Cananea had been contaminating the river basin for many decades – with a history of water sampling by university researchers to prove it. Also, officials of the affected towns and leaders of the mineworkers in Cananea told the media that they had complained to company, state, and federal officials about other spills and about the lack of environmental safeguards at the mine.

In a study of the hydrological resources of Sonora, researchers from the Sonora Technological Institute and the State Water Commission observed: “In the Sonora River basin, for numerous years there have been problems of contamination of heavy metals, the same problem that exists in the flows of Río Bacanuchi, coming from mineral exploitation and the technology used to extract copper, as well the inadequate management of industrial wastes that the mine generates.”[5]

In 2005 the State Water Commission issued a comprehensive report on water resources in Sonora that concluded that for many years there has existed the problem of contamination of heavy metals issuing from mining exploration and the inadequate management of the industrial wastes that are produced as a byproduct.”[6]

In the end, though, while confidence in the governor and in state and federal water agencies plummeted, support for the Novillo-Hermosillo aqueduct deepened. The mining disaster highlighted precariousness of Hermosillo’s sources of water – not only the increasing scarcity but also the worsening quality.

At the same time, complaints by communities of the Yaqui River basin that the boom in mining operations was contaminating the river and its tributaries.

In addition to concerns about Grupo México’s reckless environmental practices at its Caridad operations, there were rising concerns about the huge open-pit gold mine of Los Alamos Gold in the middle Yaqui River basin. Los Alamos Gold has a mining concession that extends over more than 30,000 hectares near the community of Los Mulatos and along the Aros-Mulatos tributaries of the Yaqui River. 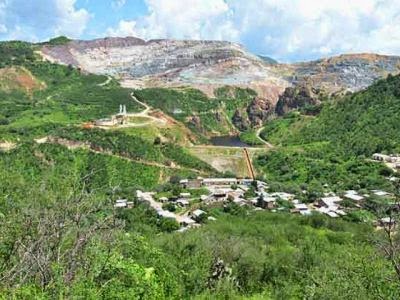 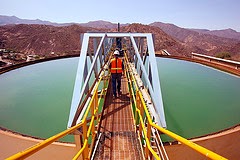 The Canadian company bought the concession for $10 million in 2003, and by 2012 had produced one million ounces of gold and more than $1 billion in revenue from its Los Mulatos Mine.[7] Los Alamos Gold boasts that its Los Mulatos gold mine, operated by its Mexican subsidiary Mina del Oro Nacional, is one of the “lowest cost gold-producing mines in the world and consistent and significant cash-flow generators.”[8] But the mine is also one of the major sources of mining contamination in Mexico. For more than a decade the community of Los Mulatos has been complaining about the careless mining practices of Los Alamos Gold that are polluting the arroyos and the river.[9] In August 2013 a truck carrying 16,000 liters of cyanide (used to purify gold) overturned on the way to the mine, contaminating the river, poisoning fish and birds, and causing the evacuation of several communities.[10]

It wasn’t, however, until after the Grupo México’s massive contamination of the Sonora River that state and federal government agencies began paying attention to the charges that the mine was contaminating water flowing down from the Sierra Madre Occidental. Then in November 2014 the National Commission for Human Rights (CNDH) condemned the contamination and asked that the government consider suspend its permit until the mine abides by national environmental regulations.

What the governor failed to mention was that the Sonoran state government maintains close relations with the mining sector. Nor has the Padrés administration acknowledge that it had received numerous complaints from local officials about Grupo México’s waste-management program and about the resulting contamination of the river. The state government has not taken upon itself any role in protecting the state from the adverse social and environmental impacts of mining, even while knowing well that the federal government’s regulatory and monitoring operations were far from sufficient.

While laying the blame for the catastrophe on the federal government – mainly the environmental agencies SEMARNAT and PROFEPA – Governor Padrés still has failed to acknowledge the state government’s close relations with the mining industry in the state – not in any regulatory role but rather as promoters, creditors, planners, financiers, and sources of technical and logistical support, while also providing training and subsidies for the mining sector. The state government actively promotes the mining industry through the mining coordination office of the Secretaría de Economía and the government-sponsored public trust established to financially support the mining sector.[11]

Without ensuring that the Novillo-Hermosillo aqueduct counted on all the proper state and federal permits and impact studies, Conagua financed and supported (at least until 2013) the aqueduct’s construction and operation. Without guaranteeing that the aqueduct would not adversely affect the water rights of the Yaquis (or even consulting the Yaquis), Conagua gave the go ahead to controversial inter-basin water transfer.

What is more, Conagua provided critical backing to the fictitious backstory created by Sonora SI and the State Water Commission (CEA) in the face of widening opposition. Conagua echoed the state government’s claims that most of the aqueduct water came either from purportedly unappropriated Yaqui river water or from the purchase of water rights from small landholders and ejidatarios in the middle basin.

Sonora’s water crisis –including the salinization of coastal plains, depleted aquifers, loss of indigenous water rights, uncontrolled water use and contamination by mining sector, towns and cities without sufficient water, and the unsustainable hydraulic infrastructure programmed by Sonora SI – are ultimately attributable to Conagua’s lack of due diligence.

It is true, as Conagua officials assert, that the federal government amended the national water law to the control and monitoring of water use, giving state and local authorities more participation and responsibility. Yet Conagua is not some distant bureaucracy in Mexico City. Not only does Conagua has officesin Hermosillo, the federal agency also has a special division that covers the entire state of Sonora called the Organismo de Cuenca Noroeste (Northwest Basin Agency).

In theory, the Organismo de Cuenca Noroeste protects the sustainability of water resources in each of the state’s major water basins. Indeed, Conagua’s Sonora branch consists of separate planning offices for Sonoyta, Concepción, Sonora, Yaqui, Mátape, and Mayo basins. All water drilling and water-diversion permits, as well as all major hydraulic projects, come under the jurisdiction of the Hermosillo-based Organismo de Cuenca Noroeste.

It is not, then, the state government – whether controlled by PRI, PRD, PAN, or the Partido Verde – that bears ultimate responsibility for the sustainability of Sonora’s hydraulic society. Rather it is the federal government through Conagua– and not only because it authorizes water megaprojects and even individual wells but also because it and the federal government’s central budget provides almost all of the funding for state’s water megaprojects.

Historically, the adverse environmental impacts to borderland water, land, and air from copper mining and smelting have affected the Mexican side of the border more than the U.S. side – where most of the mining and smelting occurred. Yet as mining operations dramatically expand in the northern borderland states – from Coahuila to Baja California – the environmental consequences to the borderland environment have been given relatively little binational consideration.

In September 2014, two separate spills – one by truck and another by train -- of toxic chemicals from Grupo México operations in Sonora raised concerns about the possible contamination of the San Pedro and Santa Cruz rivers, both of which flow north into Arizona.[12]

Water consumption (and contamination) of mining company and the company town of Cananea have also long adversely affected the quantity and quality of the San Pedro River, which flows north into Arizona.

In his 2008 Colegio de Sonora thesis, Florentino Garza Salazar painted a grim picture of environmental devastation and unsustainable water usage by the Cananea copper operations, noting that at the junction of the Sonora River headwater and the San Pedro River more than 3,000 hectares have been denuded by the mine with no attempts to reforest the barren riparian area.[13]

Moreover, the mine’s water use threatens the sustainability and recharge rates of the San Pedro river basin – a transborder river basin that in Mexico is usually just a dry gravel river bed.

Posted by Tom Barry at 2:19 PM
Email ThisBlogThis!Share to TwitterShare to FacebookShare to Pinterest