How the Nation's Border Guardians Got Stuck in a Policy Conundrum, and How They Can Get Out 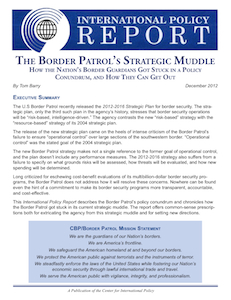 The U.S. Border Patrol recently released a new strategic plan – the third in its nine-decade history. Rather than clarifying the agency’s strategic focus, the new plan underscores the agency’s lack of strategic direction.
The previous strategic plan, published in 2004, stated ensuring “operational control” of the U.S. border as its primary objective. “Operational control” was defined as the ability of the Border Patrol to “detect, identify, classify, and then respond to and resolve illegal entries.” Facing intense criticism for their failure to ensure such security measures over large sections of the southwestern border, the Border Patrol released the 2012 – 2016 Border Patrol Strategic Plan.
The agency issued its latest plan amid mounting criticism of its billion-dollar high-tech programs, excessive and cross-border violence, and continuing failure to provide performance and cost-benefit evaluations of its various new border security initiatives. While intended to put critics’ concerns over these problems to rest, the 2012 – 2016 Strategic Plan instead ignores them entirely.
Framed as a military-type strategy and replete with references to border risks and threats, the 2012-2016 plan fails to indicate on what grounds risks will be assessed, how risks will be evaluated, and how new spending will be determined. It fails to make even a single reference to its predecessor’s former goal of operational control or include any performance measures.
Nowhere to be found in the document is even the slightest hint of a commitment to make border security programs more transparent, accountable, and cost-effective.  This lack of transparency and accountability is a mounting problem that the Border Patrol has continued to ignore.

Criticism on All Sides
Over the past several years, the U.S. Border Patrol has faced increasing and widespread criticism from all political factions. Some critics, particularly on the right, charge that the Border Patrol is not doing enough to “secure the border,” while those left-of-center lambaste the agency for abusing immigrants and intensifying a failing drug war.
Perhaps the harshest criticism has come from the government’s own auditing agencies. The Government Accountability Office (GOA) has issued a series of scathing reports faulting the Border Patrol for mismanagement, waste, and lack of strategic focus. Despite the increasing disapproval, the Border Patrol has continued to benefit from a bipartisan consensus to “secure the border,” resulting in a doubling of funding for Border Patrol operations over the last ten years.
The Border Patrol is a division of Customs and Border Protection (CBP), the agency within the Department of Homeland Security (DHS) charged with securing U.S. ports of entry (POEs) and the northern and southwestern land borders.  CBP is the largest DHS agency, receiving 21% (currently $11.5 billion) of its total funding. Over the last ten years, DHS has spent over $100 billion on border-security operations, yet the Border Patrol still struggles to formulate a practical and politically viable strategy to guide the spending of this new border security bonanza.
The term “border security” largely replaced references to “border control” in official statements following the creation of the Department of Homeland Security in March 2003. The 2012 - 2016 Strategic Plan is the latest attempt to define the meaning of the term while formulating a strategy to guide border security operations.
CBP routinely explains its “border security” mission as obstructing the entry of “dangerous good and dangerous people,” and stations customs officers at land and coastal POEs, while Border Patrol agents patrol the land border between the POEs. However, the new strategy fails to alleviate any of the persistent concerns about the Border Patrol’s strategic focus and operational efficiency.
The GAO and leading congressional members concerned with border policy have expressed skepticism about the Border Patrol’s resolve and capacity to address concerns about cost-effectiveness and strategic focus, while faulting the agency for not including performance measures in its new plan. In an attempt to refute these concerns, acting CBP Commissioner David Aguilar said “the Strategic Plan sets a firm foundation for the continued evolution of the Border Patrol as an integral part of CBP’s overall border management and homeland security enterprise.”

Public Relations, Not Serious Strategy
Though claiming to be both “risk-based” and “intelligence-driven,” the new plan includes no methodology for assessing risks or for leveraging intelligence to meet identified threats to homeland security. The Border Patrol also fails to explain – either in the new strategy or elsewhere – how risk-management will determine the directional focus and budgetary specifics of border funding.
The 2012 – 2016 Border Patrol Strategic Plan is not a serious document. It includes repeated references to vague tactics such as rapid response, intelligence, community engagement, whole-of-government approaches, and inter-governmental integration. Full of platitudes, patriotisms, military jargon and abstractions, the strategy plan is essentially a public-relations statement. The “firm foundation” that CBP Chief Aguilar sees is manifestly flimsy and unprofessional. The Strategic Plan has no real plan, no timelines, no summary of the evolving geopolitical context for border control, no strategic focus, and no baselines or metrics to measure the Border Patrol’s progress in securing the border.
The Border Patrol’s Strategic Muddle describes the agency’s policy conundrum and chronicles how the Border Patrol got stuck in its current strategic mess. The report offers common-sense prescriptions for extricating the agency from this muddle and offers recommendations for setting new directions.Key
Findings
As the nation transitions away from its post-9/11 fears and wars, U.S. border strategy needs to be overhauled and updated. A new strategy for border control should be closely linked to a penetrating review of counterterrorism, the drug war, and immigration policies.
The time is auspicious for such a revision. New budgetary and debt concerns, escalating critiques of immensely expensive and shamefully ineffective border security programs, and expanding critiques of the drug war have opened up new political space.
Recommendations for new strategic directions for the Border Patrol include the following:
* DHS must define what it means by “border security,” and the Border Patrol must go back to the drawing board to formulate a more comprehensive and cogent strategy, along with closely linked performance measures.
* The Border Patrol must demonstrate that its “metrics” are indeed based on closely considered threat assessments and risk-management processes. As part of its strategic plan, the agency must do the following: categorize risks and threats, prioritize them, justify this prioritization, mount programs to target these prioritized threats, and establish a methodology to measure performance.
* The Border Patrol should immediately desist in making escalated threat assessments about illegal drugs and drug-smuggling operations. The crossing of illegal drugs has long characterized the border and will continue to do so as long as there is a U.S. market for these substances.
* Administratively, DHS could, and should, mandate that the Border Patrol end what is, in effect, its strategic focus on the marijuana drug war. Marijuana is not a security threat, and there is mounting momentum for its legalization or decriminalization on both sides of the border. Nearly 95% of the Border Patrol’s drug war activities involve marijuana.
* As part of its stated determination to pursue risk-based border protection, the Border Patrol should deprioritize immigration enforcement. A credible risk-management process cannot justify operations that make no distinction between truly dangerous individuals and ordinary immigrants seeking work and family reunification. The Border Patrol should instead target border bandits who prey upon vulnerable immigrants and smugglers of truly dangerous illegal and prescription drugs.
* The Border Patrol must respond to GAO recommendations that the agency undertake serious cost-benefit evaluations of each programmatic component of its border security operations. Congress and the U.S. public deserve to know in detail the costs and associated benefits of multimillion-dollar expenditures on each of the various tactical infrastructure and high-tech projects.
* The Border Patrol must establish transparent procedures that will allow Congress, government auditors, and the public to evaluate the effectiveness of its many new operations and initiatives in successfully targeting the threats to the homeland on what the Border Patrol calls “America’s frontline.”

To read the complete Border Patrol’s Strategic Muddle report, including references, please visit: http://www.ciponline.org/research/entry/border-patrol-strategic-muddle
Posted by Tom Barry at 10:56 AM
Email ThisBlogThis!Share to TwitterShare to FacebookShare to Pinterest

What are your thoughts on the relationship between the criminal insurgency evolving in Mexico and its implications for expansion or mutation into the U.S. socio-political culture. In other words, cartel and gang elements in parts of Mexico, (N. Mex in particular) are supplanting the state with their own brand of "governance"; with the overarching goal to carve out greater areas of criminal freedom. Do you think the U.S. southwest is an emerging "zone of impunity" or some type of destabilized area?