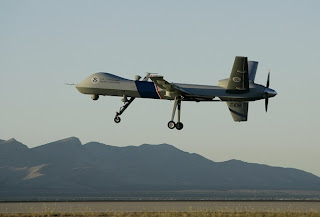 The overall low number of apprehensions and drug seizures attributed to drone surveillance on the border raise new questions about the efficacy and cost-effectiveness of the unmanned Predator drones deployed by the Department of Homeland Security.


Even if the numbers of pounds of seized marijuana and of illegal immigrant border crossers were much higher,  the same questions might be asked given the failure of DHS to make a strong case that cannabis and immigrants threaten the security of the homeland.


Yet another problem with the border drone program is that the declared numbers are carelessly formulated by Customs and Border Protection and by its Office of Air and Marine. What is more, it’s unclear whether the number of apprehensions and seizures CBP/OAM does disseminate are entirely attributable to UAV surveillance.
First, it’s not clear whether the cited seizures and arrests are solely attributable to drone surveillance.  CBP and OAM officials have been ambiguous about this. Most agency media releases say that Predator surveillance “has led” to the reported drug seizures and immigrant apprehensions.
Yet other media releases and CBP statements to congressional oversight committees fudge the role of the drones, saying only that drones “contributed to” or were “involved” in the actions that led to the seizures and arrests.
Second, CBP is careless in providing its numbers of arrests, seizures, and flight hours, raising questions about the veracity of the numbers.
The Dec.  27 media release refers to the seizures and arrests during so many drone flight hours – 12,000 hours of drone flight-time since 2005.
But CBP/OAM has over the past year given the media, Congress, and this writer the same arrest and seizure numbers (46,600 pounds of narcotics and 7,500 apprehensions) for varying numbers of reported hours flight-time – for 10,000, 11,500, and mostly recently 12,000 hours of drone air time.
CBP/OAM’s numbers game also includes variations of the numbers of arrests and seizures for the same number of flight hours. Celebrating reaching 10,000 hours of drone air time in June 2011, CBP/OAM released a press statement asserting that the those 10,000 hours of “UAS Predator operations have resulted in the apprehension of 4,865 undocumented aliens and 238 smugglers; the seizure of 33,773 pounds of contraband.”

Setting aside questions about why CBP/OAM can’t get its current numbers straight, the integrity and value of the drone program are also called into doubt by the unimpressive rate in the increased number of drug seizures and immigrant apprehensions reported by the agencies since 2006.

As more Predators are added to the CBP/OAM fleet, the rate of arrests and seizures has dropped dramatically.

If evaluated against the total numbers attributed to the border Predators since 2005, the quantity of marijuana seized and the number of immigrants apprehended during the first six months of border drone surveillance are outstanding.

When announcing that it was purchasing its second Predator, CBP said that “during its operational period” its first Predator flew 959 hours and supported 2,309 arrests, contributed to the seizure of four vehicles, and the capture of 8,267 pounds of illegal drugs.

That operational period was from October 2005 to April 2006, when the Predator crashed in the Arizona desert near Nogales.

Crash investigators from the National Transportation Safety Board found that the contract pilot shut off the drone’s engine when he thought he was redirecting the drone’s camera. As Major General Michael Kostelnik, who directs OAM, explained to the Border and Marine Subcommittee of the House Homeland Security Committee, “There was a momentary loss link that switched to the second control” -- and the Predator fell out of the sky.

CBP/OAM has not, however, estimated the cost of this strategy. Nor have the agencies reported on the cost of the program thus far. A review of DHS purchasing reveals that the department spent $242 million in drone contracts with General Atomics.

A recent report by the Government Accounting Office on CBP’s high-tech border-security programs noted that the UAVs have “significant infrastructure costs with the highest cost risk.” Yet DHS continues to burn through its ever-expanding border security budget without apparent concern for cost-effectiveness or aptness in pursuing the DHS counterterrorism mission.