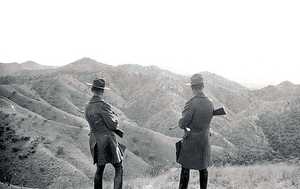 “Transnational criminal organizations.” That’s one of my Google Alerts, and in the past several months I’ve been continually alerted to instances of successful operations against TCOs by agencies of the Department of Homeland Security.
One might assume from the flurry of media releases from Customs and Border Protection (CBP) and from Immigration and Customs Enforcement (ICE) that the Obama administration’s new Strategy to Combat Transnational Organized Crime is working.
But most of the reported strikes against TCOs involve Mexican illegal border crossers carrying 50-60 pound burlap bags packed with marijuana.
One recent release reported the arrest of six Mexican nationals, including three juveniles, from Sinaloa packing in 400 pounds of marijuana across the remote Quijotoa Mountain southwest of Tucson.
Another recent purported TCO-arrest also involved six Mexicans carrying similar loads of pot through the Sonoran desert near Gila Bend southwest of Phoenix.
All those arrested – identified by CBP as “suspected smugglers” -- eventually will face deportation, but first they will, if convicted, face jail or prison time.
Border Patrol agents caught another group of three marijuana backpackers the same day carrying 25 pounds of marijuana, and seized an AK-47 from the group.
In its media releases, CBP states that it “is charged with keeping terrorists and terrorist weapons out of the country while enforcing hundreds of U.S. laws.”
That language dates from the post-9/11 creation of the Department of Homeland Security.
And the following language dates from the Obama administration’s new strategy to combat transnational criminal organizations and its reframing of the “war on drugs” and drug-trafficking organizations (DTOs):
The Border Patrol uses a combination of proven technology, intelligence, and specialty units to target transnational criminal organizations. By impacting their ability to transport contraband throughout the United States, Border Patrol agents have made significant progress toward establishing a secure and safe border environment.
Clearly border security operations and infrastructure have made it more difficult, costly, and dangerous to import illegal drugs into the United States. But it is not at all clear that the border security buildup has brought significant progress toward creating a secure and safe border.
Instead of making the border safer and more secure, the increased border security operations and the associated combat against TCOs have transformed traditional activities of the U.S.-Mexico border – the crossing of illegal immigrants and drugs – into activities that routinely involve high crossing fees and weapons.
No doubt that U.S. border security operations are “impacting their ability to transport contraband,” but the drug trafficking organizations continue to supply the expanding U.S. drug market. Border Patrol agents continue to catch backpacking marijuana smugglers, but this doesn’t mean that these apprehensions “target transnational criminal organizations,” as CBP falsely claims.
Posted by Tom Barry at 8:00 PM
Email ThisBlogThis!Share to TwitterShare to FacebookShare to Pinterest