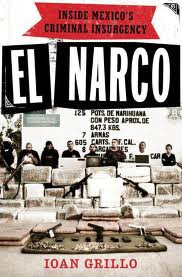 What’s going on in Mexico is not a “war on drugs.”

No doubt that the drug-related violence and crime are products of drug- prohibition and counternarcotics policies instituted by the United States and later give international legitimacy by the United Nations. Yet the essence of the turmoil and terror in Mexico is the product of a drug war.

If the only contribution of El Narco: Inside Mexico’s Criminal Insurgency (Bloomsbury Press, November 2011) were to succeed in getting us to understand this difference, the book would be regarded as one of the best on the origins and evolution of the drug trade in Mexico.

As British journalist Ioan Grillo explains in his new book, the
“war on drugs” dates back many decades in Mexico and has been largely coincident with U.S., ever since President Nixon announced the new war four decades ago  -- marked by both the failed U.S. interdiction plan called Operation Intercept in 1969 and by the U.S. –supported drug eradication campaigns in the early 1970s (using highly toxic defoliants like paraquat, also deployed in the still raging Vietnam War).

What Grillo calls the Mexican Drug War is distinguished from the rhetorical “war on drugs” both because it has become more like an actual war and because the objective of drug control has been subsumed into a combat for territorial, social, economic, and to some degree political control by warring factions – including the various and evolving cartels, the Mexican military, and the Mexico police.

But it is less clear cut and more worrisome than simply a battle for the supremacy among legal and illegal warlords. That’s because we learn from Grillo – in his superbly organized and narrated exposition of the Mexican Drug War – that the Mexican state and its instruments of law enforcement and security are no longer simply corrupt and compromised, as has been a fundamental truth in Mexican governance historically, but that they are often no longer representatives of a corrupted state but father functionaries of criminal factions.

Grillo makes as a strong case that the Mexican Drug War, as we now know it, began not with President Calderón’s declaration of war on Dec. 11, 2006 shortly after moving into Los Pinos but rather two years previously when Los Zetas, a grouping of former-special force soldiers, “militarized the conflict” in their campaign to institute control over sections of northeast Mexico, mostly notably in Nuevo Laredo.

“Suddenly,” as Grillo describes the transition, “the public saw captured criminals in combat fatigues with heavy weaponry.” The Zetas,” writes Grillo, “were not thinking like gangsters, but like a paramilitary group controlling territory.”

One of the many standout contributions of El Narco is Grillo’s success in helping us understand that the evolution of the drug war in Mexico is not simply a matter of more deaths and more horrific ways of killings. Not just a matter of scope and scale, the Mexican Drug War has become a new phenomenon that defies easy definition.

Grillo mounts a strong case that the Mexican Drug War is a “criminal insurgency,” arguing convincingly that the security of the Mexican state is at risk from insurgent cartels, which are not just defending themselves from the official security forces but contesting state power to govern.

Insurgency is typically met with counterinsurgency and often outside military intervention – which an increasing band of U.S. hawks are saying is all but inevitable – but Grillo contends that the solution should “not come from the barrel of a gun.”

The author presents a cogent plea for a pragmatic and long-overdue reform of drug prohibition laws that have fostered a shadow and increasingly violent economy of drug trafficking and consumption. “People kill over street corners because they are fighting over the wealth of the black-market trade, not because they smoked spliffs.”

El Narco is the best overview book on the Mexican Drug War.  While the book’s subtitle “Inside the Criminal Insurgency” exaggerates the extent that Grillo managed to penetrate the drug industry in Mexico, the book is less valuable for its bit of investigative reporting but more for the author’s admirable ability to assemble a great deal of material – past and present – about the drug trade into an engaging and highly illuminating briefing about what’s going on in Mexico and what both countries may face if more sensible policies are not adopted by the international community, particularly the U.S. government.

Grillo’s writing is consistently accessible and pleasing – and refreshingly direct. He writes, for example, that, “The Obama administration stumbled on with a befuddled agenda on Mexico,” noting that its mixed messages – hailing Calderón’s courage and achievements while also speaking frankly, as Hillary Clinton did, about the emerging insurgent character of the evolving Mexican Drug War – illustrate that it has been “increasingly confused on Mexico and shaky in its support for the current strategy.”

The chapters on narco “Culture” and narco “Faith add little new to our understanding of Mexican drug trafficking, and simply recount the usual tales of the narcocorridas and Santa Muerte.

Grillo’s “Diversification” chapter is mostly descriptive and the analysis that the drug cartels have become diversified criminal organizations falls short. Could the major cartels or associated bands survive without the immense profits of drug trafficking? Unlikely, unless they assumed control over entire legal industries. But Grillo makes a strong point when supporting his argument about the evolved character of the cartels when he describes the new business of extortion and protection payments, which is eroding the traditional financial base of Mexican politics and law enforcement.

Grillo deserves special credit for supporting the groundbreaking investigative journalism of Gary Webb in his1996 series Dark Alliance that highlighted how U.S. political goals, such as the CIA and White House support of the Nicaraguan contras, overrode the drug war goals of the DEA. Your appreciation of Grillo grows as he takes the American media to task for failing to take up the investigation the Webb began: "The Los Angeles Times and New York Times should have followed these leads rather than just looking for holes."

El Narco is also refreshing in its analysis of Calderón’s naïve and moralistic view of governance in the era of the Mexican Drug War. Upon taking office, the president “spoke repeatedly about the need to restore order and reassert the power of the state,” writes Grillo,” observing too that the “message applied as much to street blockades and riots [by political dissidents] as drug decapitations.”

In this context, El Narco also talks straight about the repression of the indigenous and student protesters and dissidents in Chiapas and Oaxaca by the military and police, as in recalling “the murder of American Indymedia journalist Brad Will.”

In El Narco Grillo asserts, “Mexico is becoming the new point of comparison for a criminal insurgency.”

While his definition of a criminal insurgency is fuzzy, there is little doubt that the threats to Mexico’s national security and public safety need to be met with a more enlightened strategy – and that Mexicans deserve more from the Obama administration than another five years of befuddlement.

It's nothing but a war between drug corporations in mexico. Our bar owners used to fight each other with bloody violence and deaths of their competitors back when alcohol was illegal...in Okla. Let's put the cards of 'truth' on the table and call it!