Sealing the Border Against Marijuana 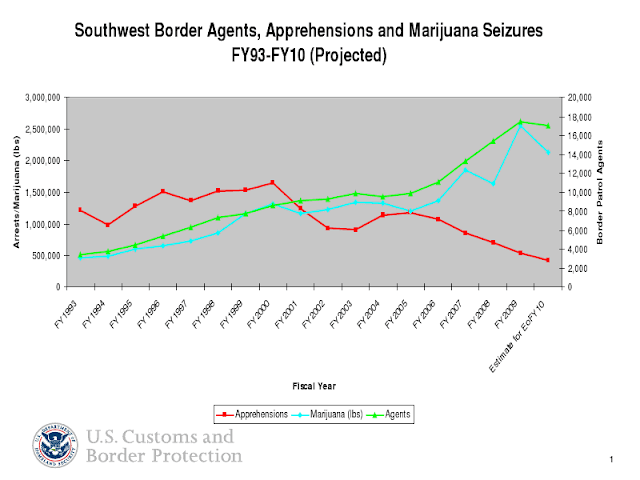 Customs and Border Protection says it is "securing the border" against "dangerous people and drugs." And it has the stats to prove it.


If you don’t mind logistical inconsistencies, the Department of Homeland Security has the proof that CBP (the DHS agency that includes the Border Patrol) stands on the frontlines of homeland security -- keeping us safe against immigrants and marijuana.

In a new report outlining its plans for more billion-dollar, high-tech projects to secure the border, DHS boasts: “Recent efforts have generated significant improvements in border security, as measured by a decline in apprehensions and an increase in drug seizures.”

In its Report on the Assessment of the Secure Border Initiative-Network (SBInet) Program, DHS includes a chart (above) that is intended to document its border-security achievements. But there is no explanation how its purported success in securing the border can be measured simultaneously in increasing numbers (drug seizures) and decreasing numbers (illegal border crossers apprehended).

When defending its annual budget increases, DHS pointed to the rising number of illegal immigrants in the first half of the decade to explain the urgent need for more agents, more walls, and more high-tech fixes. As the number of apprehended immigrants has started to decline, DHS underscored the purported effectiveness of its border security spending and the resulting “deterrence.”

Depending on the topic of the press briefing or congressional hearing, DHS variously attributes the new numbers of arrests and seizures to the border fence, increased Border Patrol agents, remote surveillance, and higher overall agency budgets.

But DHS' arguments about increased deterrence from the expanded deployment of Border Patrol agents (doubled since 2003) for some unexplained reason don't apply to the control of illegal drug flows across the southwestern border. With drugs, more border security means more seizures not fewer.

DHS doesn’t attempt to explain why deterrence may work with illegal immigrants but not with illegal drugs. As has been the practice during the four decades of the war on drugs, increased seizures, arrests, and eradications are the benchmarks used to determine success – not the measure of drugs flowing into the United States or consumed here.

Whether it’s the thousands of immigrants apprehended or the tons of marijuana seized, the Border Patrol always seems to have the numbers to support the dual contention that it is doing a great job and that a budget increase is critical.

When immigrant apprehensions are up, the Border Patrol and ICE say it is the result of their diligence. When the number of immigrants they capture is down, they say it is because of the deterrent effect of their increased enforcement.

It’s what Peter Andreas and Kelly Greenhill call the “numbers game” in their book Sex, Drugs, and Body Counts. “The standard quantitative indicators – such as numbers of arrests, deportations, seizures, confiscations, and so on – are built into the funding mechanism, creating powerful bureaucratic incentives to sustain them,” they write.

The numbers game played by the DHS and its border-control and immigration-enforcement agencies has been wildly successful in supporting ever higher budgets. Yet, never does DHS bring other, less convenient numbers into the game picture, especially when it is making a case for increased agency budgets.


Missing in the DHS chart of seizures are, among other things, numbers from the Justice Department’s National Drug Intelligence Center.

The center’s National Drug Intelligence Assessment 2010 reported that marijuana in the United States is “widely available, in part as a result of rising production in Mexico. The amount of marijuana produced in Mexico has increased an estimated 59 percent overall since 2003.”

Increased border security by DHS, then, has had little impact on the availability of marijuana in the U.S. market. According to this Justice Department, “Marijuana is the most commonly used illicit drug, with 25.8 million individuals 12 years of age and older (10.3%) reporting past year use.”

That’s about the same percentage of U.S. residents who have used marijuana every year this past decade, even as population is rising. In their book, Andreas and Greenhill note that the numbers used to assess cross-border activities “often have more to do with political imperatives and bureaucratic incentives than actual deterrence.”

What’s all too clear is that DHS, despite its professed commitment to protect against “dangerous people and goods,” is playing the same old numbers game, while failing to address the policy origins of the border control, immigration enforcement, and drug control crises – namely our failure to reform immigration policy and to end the drug wars home and abroad.


Posted by Tom Barry at 9:56 PM
Email ThisBlogThis!Share to TwitterShare to FacebookShare to Pinterest

Thanks for sharing such a nice information from this blog. I found it so interesting at last i found now what i am looking for.Please continue the good work and I look forward to more of your nice posts in creating the new SharePoint group. Its great. legal smoke