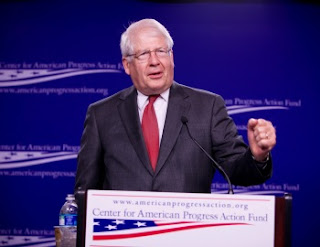 What are we getting for our investment in more aggressive immigration enforcement? That’s what Rep. David Price (D-NC) wanted to know when he chaired the April 2 hearing of the Homeland Security Subcommittee. The hearing’s topic: “Priorities Enforcing Immigration Law.”

Despite the record-breaking arrests, detentions, and deportations by ICE in 2008, Rep. Price is not pleased. He says that the subcommittee has “made billions of dollars available for ICE” since 2003.

But the “questions we must all ask are: have these huge investments produced what our country needs and expects from the agencies enforcing our immigration laws? Is DHS prioritizing these resources appropriately?” ICE officials assure him that they are aggressively hunting down criminal aliens, but Price is not pleased with the progress.

The North Carolina congressman points to figures that show noncriminal removals having increased 400% since 2002 but the removal of criminal aliens has increased only 60%. Over the past couple of years Price has been leading the anti-criminal alien bandwagon in the House. It’s not that, like many congressional colleagues from the South, Price is an ardent immigration restrictionist. In fact, he is a firm supporter of comprehensive immigration reform.

That’s why the liberal Center for American Progress invited Price to deliver a major speech on immigration reform and homeland security last June. In the June 23 speech at the Center for American Progress (the source of several high officials of the Obama administration including at Immigration and Customs Enforcement), Price voiced his strong support for a comprehensive immigration reform bill that would put the country’s undocumented population on the path to citizenship.

But he also wants tough and quick immigration enforcement, prioritizing the removal of criminal aliens. “There can be no credible argument,” said Price, “that deporting illegal workers should take precedence over efforts to combat smuggling, prevent terrorism, and deport criminal aliens.” That’s an argument that many progressive supporters of CIR could agree with and most have.

Price’s CIR position is also appealing to CIR advocates because he believes that DHS shouldn’t be using scarce resources – the resources his committee supplies – raiding worksites and arresting noncriminal workers. He makes this point repeatedly – to the media, at congressional hearings, and in speeches including the one he gave at the Democratic Party think-tank Center for American Progress:


“While we have been using scarce resources to detain and deport laborers at meatpacking plants, we have allowed tens of thousands of dangerous criminal aliens to be released back into our communities after serving their sentences, with no awareness on our part of their immigration status.

“No matter what one’s opinion about the broader illegal immigration problem and how to address it, we should all be able to agree that ICE’s highest priority should be to identify and deport unlawfully present aliens who have already shown themselves to be a danger to our communities and have been convicted of serious crimes. “Such reform will strengthen our economy, reaffirm the rule of law, and enhance homeland security, allowing DHS to focus more effectively on that small percentage of illegal immigrants that has the capacity and the intent to commit crimes and do us harm.”

With the immigration issue, consensus is hard to find, and Price expects to find it around his “criminal alien” crusade. After all, who could be against removing “criminal aliens” from our communities and then removing them from our country? Price believes that Janet Napolitano also agrees, and is firmly aboard the anti-criminal bandwagon. In his opening statement to the committee hearing, Price stated:


"Last year, we directed ICE to use $1 billion of its resources to identify and remove aliens convicted of crimes, whether in custody or at large, and mandated that this be ICE’s number one mission. I continue to believe in the wisdom of this course and want to know how ICE plans to make more progress identifying criminal aliens and deporting them once their sentences are complete. Since her confirmation, I have been encouraged by Secretary Napolitano’s public statements that she shares this perspective. We must make sure the Department is setting the right priorities for immigration enforcement.”

Indeed, it certainly appears the DHS chief agrees with Price’s assessment. She has repeatedly vowed to make the dragnet for criminal aliens a top priority of immigration enforcement, declaring that she wants these alien criminals off America’s streets.

In the initial presentation of the requested 2010 budget, the White House “provides over $1.4 billion for Immigration and Customs Enforcement programs to ensure that illegal aliens who commit crimes are expeditiously identified and removed from the United States.”

Nonetheless, Price is concerned. He points out that “of the nearly 370,000 deported by ICE, less than a third, or 114,358, had ever been convicted of a criminal offense. This, despite the fact that up to 450,000 criminals eligible for deportation are in penal custody in any given year.” (That’s an extremely high ICE estimate, and almost all ICE’s estimated number of criminal aliens are serving time and thus not eligible for removal until their sentence is served.)

It also bothers the congressman that less than one-quarter of those captured by ICE’s Fugitive Operations Teams in 2008 had been convicted of criminal offenses and that “over three-quarters of those arrested in ICE worksite enforcement raids last year were not charged with any crime.”

Price’s crusade against criminal aliens and the administration’s apparent accession to this campaign raise some timely concerns about the future of immigration enforcement and the future of comprehensive immigration reform. There are good reasons to believe that ICE is yielding to the congressional demands (echoed by fellow Democratic Sen. Robert Byrd in the Senate) for more mandatory detentions and removals based on criminal alien status. In both the House and the Senate, Democrat-led committees are increasing the ICE budget if they promise to mount new programs to remove criminal aliens from our communities.

The Secure Communities Program is the latest in an array of ICE Criminal Alien Program initiatives. One problem is that the criminal aliens being removed are not the dangerous criminals that Price conjures up in his sales pitch for the crusade but mostly nonviolent offenders (largely drug-possession convictions) and increasingly legal immigrants.

Another problem is that any new push for comprehensive immigration reform may be sold to the public alongside this criminal alien crusade. In other words, the developing Democratic Party version of the “enforcement first” agenda of the Republicans and immigration restrictionists appears to be a guarantee that they will rid the country of all criminal aliens. Slowly the new pejorative for immigrants is shifting from “illegal aliens” to “criminal aliens.” Little noticed in this shift is that the increasingly expansive term “criminal alien” makes no distinction whether an immigrant is legal or illegal and makes little distinction in the severity of crime.
Posted by Tom Barry at 3:20 AM
Email ThisBlogThis!Share to TwitterShare to FacebookShare to Pinterest
Labels: Criminal aliens