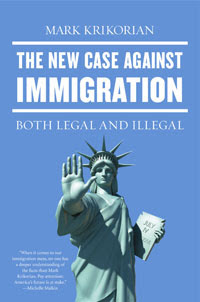 Immigration restrictionists left the mid-2007 immigration showdown in triumphant. But in the wake of their victory in blocking immigration reform, the leading restrictionist voices haven’t been triumphalist. Instead of sitting back, they have kept hammering. Strengthened by a large jump in memberships and new media attention, they kept pushing their anti-immigration agenda. When Democrats attempted to slip through a small immigration reform bill called the Dream Act, they again mobilized their legions of anti-immigration stalwarts around the country. And when Sen. Dianne Feinstein (D-CA) attempted to respond to agribusiness pressure for an agricultural guestworker program in late 2007, the restrictiontist mobilized again, persuading the bill sponsors to drop the proposed Ag Jobs bill. Already the restrictionists are anticipating that some in Congress may lose its enthusiasm for “attrition through enforcement” as its emotional and financial toll adds up.
And they are set to oppose any new initiative by the new administration to legalize unauthorized immigrations. “The stepped-up enforcement of the past year may peel off some enforcement-first voters and congressmen who are willing to be persuaded that the enforcement is now happening, and is adequate, to move ahead with the amnesty,” observed Mark Krikorian, executive director of the Center for Immigration Studies, which promotes enforcement-first policies. The Bush White House, he added, “sees this enforcement push as building credibility for the next administration to have an amnesty.” Restrictionists are determined to defend their gains against any attempt to reintroduce legalization legislation or to rein in the ongoing crackdown on immigrants. At the same time, the restrictionists are reaching out to new constituencies and expanding their policy agenda to include a new emphasis on slashing legal immigration. Krikoiran’s new book, The Case Against Immigration – Both Legal and Illegal, is a timely reminder that the restrictionists have a grand agenda that extends far beyond the immigrant crackdown. While the book proposes the same type of immigration reform supported by the three DC-based institutes, it does make a startling new case against immigrants. In a recent interview with National Review online, CIS’ Krikorian said, “It’s a mistake to think of legal and illegal immigration as distinct phenomena. They come from the same places through the same means, often in the same families and even the same people (shifting back and forth between being legal and illegal), and have the same impact on society.” Krikorian does, however, say the illegal immigrants, unlike legal immigrants, “remain morally culpable for their misdeeds.”
Posted by Tom Barry at 2:15 PM
Email ThisBlogThis!Share to TwitterShare to FacebookShare to Pinterest
Labels: Immigration restrictionists

Rampant population growth threatens our economy and quality of life. Immigration, both legal and illegal, are fueling this growth.

I'm not talking just about the obvious problems that we see in the news - growing dependence on foreign oil, carbon emissions, soaring commodity prices, environmental degradation, etc. I'm talking about the effect upon rising unemployment and poverty in America.

I should introduce myself. I am the author of a book titled "Five Short Blasts: A New Economic Theory Exposes The Fatal Flaw in Globalization and Its Consequences for America." To make a long story short, my theory is that, as population density rises beyond some optimum level, per capita consumption of products begins to decline out of the need to conserve space. People who live in crowded conditions simply don’t have enough space to use and store many products. This declining per capita consumption, in the face of rising productivity (per capita output, which always rises), inevitably yields rising unemployment and poverty.

This theory has huge implications for U.S. policy toward population management, especially immigration policy. Our policies of encouraging high rates of immigration are rooted in the belief of economists that population growth is a good thing, fueling economic growth. Through most of human history, the interests of the common good and business (corporations) were both well-served by continuing population growth. For the common good, we needed more workers to man our factories, producing the goods needed for a high standard of living. This population growth translated into sales volume growth for corporations. Both were happy.

But, once an optimum population density is breached, their interests diverge. It is in the best interest of the common good to stabilize the population, avoiding an erosion of our quality of life through high unemployment and poverty. However, it is still in the interest of corporations to fuel population growth because, even though per capita consumption goes into decline, total consumption still increases. We now find ourselves in the position of having corporations and economists influencing public policy in a direction that is not in the best interest of the common good.

The U.N. ranks the U.S. with eight other countries - India, Pakistan, Nigeria, Democratic Republic of Congo, Bangladesh, Uganda, Ethiopia and China - as accounting for fully half of the world’s population growth by 2050. The U.S. is the only developed country still experiencing third world-like population growth, most of which is due to immigration. It's absolutely imperative that our population be stabilized, and that's impossible without dramatically reining in immigration, both legal and illegal.

If you’re interested in learning more about this important new economic theory, I invite you to visit my web site at OpenWindowPublishingCo.com where you can read the preface for free, join in my blog discussion and, of course, purchase the book if you like. (It's also available at Amazon.com.)

Please forgive the somewhat spammish nature of the previous paragraph. I just don't know how else to inject this new perspective into the immigration debate without drawing attention to the book that explains the theory.