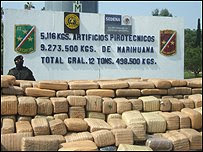 U.S. drug czar John Walters took the Bush administration’s macho drug war message to Mexico last week, calling the drug cartels battling the Mexican government and fighting each other for dominance “terrorist criminals.”
"They have a choice: Come in and face justice, or die," Walters said of the drug gangs.
Who believes that?
At a time when the U.S. State Department is warning U.S. tourists that they are taking their lives in their hands if they venture into drug war-torn northern Mexico, when the U.S. consulate in Mexico has come under fire by narcos, and when the number of gruesome gangland executions keeps increasing.
In Mexico, where police are uniformly corrupt and the military notorious ineffective, there is no institutional justice. Criminals, whether narcos or common criminals, operate with impunity. When it comes to dying, it’s the police not the drug gangs who are dying.
In Mexico, the drug war is mostly a government show, not a credible commitment to public safety. The army routinely issues media releases about public burnings of confiscated marijuana. Meanwhile, news about government success in obstructing trafficking in dangerous and more profitable illegal drugs is rare.
For the U.S. government, the drug war is largely a righteous moral crusade led by ideologues like Walters, who has a long history of leadership in right-wing organizations. For Walter, drugs are evil, whether medical marijuana or crack. Prior to his Mexico visit, Walters spoke out against a medical marijuana law in Michigan.
Reacting to rising public sentiment in favor of using marijuana as a medical treatment for cancer and other patients, Walters in 2003 said that medical marijuana made no more sense than “medical crack.”
Walters also apparently sees little difference between the narcos in Mexico, who are responsible to more than 3000 murders this year, and marijuana farmers in California. Last years Walters called northern California marijuana growers “violent criminal terrorists.”
As the U.S. government maintains its enforcement-first approach to the illegal drug problem, other governments are deciding that the drug war should not be taken to drug users.
Commenting on Mexico’s recent proposal to decriminalize personal possession of illicit drugs, Ethan Nadelmann, executive director of the Drug Policy Alliance, said, that this “is consistent with the broader trend throughout Western Europe, Canada, and other parts of Latin America to stop treating drug use and possession as a criminal problem. But it contrasts sharply with [the approach taken in] the United States [the U.S. government] should think twice before criticizing a foreign government for its drug policy, much less holding out the U.S. as a model. Looking to the U.S. as a role model for drug control is like looking to apartheid South Africa for how to deal with race."
Walters will likely be gone from the president’s National Office on Drug Policy in a few months. Among the important questions facing the new president will be whether to end the failed drug war model and adopt a new drug policy based on treatment and legalization.
See TransBorder Profile of John Walters
Posted by Tom Barry at 4:12 PM
Email ThisBlogThis!Share to TwitterShare to FacebookShare to Pinterest
Labels: drug war, Mexico

One of Mexico’s key anti-drug units has been infiltrated by a drug cartel. This suggests not only that Mexico’s best anti-drug units are still at risk of losing even more credibility (government agencies can always lose more credibility), but also that the Mexican government should start to hire more historians. Eleven years after Mexico’s drug czar was arrested, the government has disclosed that high-ranking officials at the Unit of Specialized Investigations on Organized Crime (SIEDO) , a pillar of the Attorney General’s Office, had been providing strategic information to a violent and powerful drug cartel since 1997.
------------------
Bobwilliams
social signatures