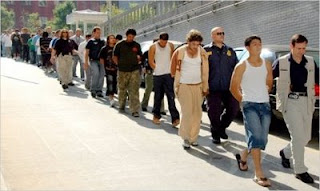 Here are the latest deportation – or as ICE now says – “removal” numbers. Since 2001 the number of immigrants deported from the United States each year has nearly tripled, rising from 115,500 deported in 2001 to an estimated 312,000 in 2008 (with the final calculation due out after the close of the fiscal year on Sept. 30). In 2007 the U.S. government removed 285,900 immigrants (including voluntary returns by immigrants who agree to deportation without a hearing). As the immigrant crackdown intensifies, the number of deportees has increased by approximately 25,000 in 2008. (communication with ICE, Sept. 23) Latest U.S. census numbers based on household surveys show that the immigration – legal and illegal – is declining. In 2007 the number of immigrants increased by only 511,000 – down from the average of a million a year since 2000. This dramatic decrease was underscored by a decline in the foreign-born population in 14 states, including in such traditional immigrant gateways as New Jersey and Illinois and such newer destinations as Nebraska, South Dakota and Kansas. Some destination cities like Phoenix and Denver experienced an increase in the immigration population in 2007. Anti-immigration groups attributed declining immigration mainly to increased enforcement – not just deportation but also increased border security – while pro-immigration institutes and many academics say the declines are mainly attributable to the stagnating U.S. economy, particularly the construction sector. Whatever the leading cause, it’s likely that fewer immigrants will be entering the United States in 2008 and 2009 as the U.S. economy continues to tumble and the immigrant crackdown spreads. The possible upside of this trend might be the declining influence of the mean-spirited immigration restrictionists, while the downside (already evident) includes the decline of remittances to poverty-stricken families in Mexico and other source countries, broken families in the United States, and the fading of vibrant immigrant-fed communities both in inner cities and rural America.
Posted by Tom Barry at 3:12 PM
Email ThisBlogThis!Share to TwitterShare to FacebookShare to Pinterest
Labels: deportation, Immigration

I'm a little disappointed you didn't mention the economy as an immigration push/pull factor. Researchers have found, again and again, that immigration slows in the face of a sluggish U.S. economy. This potential decline in undocumented immigration comes as no shock. The U.S. economy is in a slump and immigrants are smart. They come here to work.

I did mention the economy. See below:

"Whatever the leading cause, it’s likely that fewer immigrants will be entering the United States in 2008 and 2009 as the U.S. economy continues to tumble and the immigrant crackdown spreads."