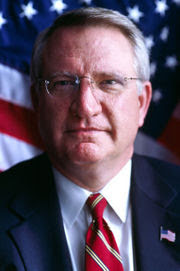 Bush administration drug czar John Walters is a conservative ideologue and loyal Republican. Appointed in December 2001 to direct the White House’s Office of National Drug Control Policy, Walters came to the Bush administration from the Philanthropy Roundtable, the consortium of mainly conservative foundations, where he served as president from 1996 to 2001. Known for his brash statements and dogmatic politics, Walters in July 2007 called northern California marijuana growers “violent criminal terrorists.” Reacting to rising public sentiment in favor of using marijuana as a medical treatment for cancer and other patients, Walters in 2003 aid that medical marijuana – now permitted in 12 states – made no more sense than “medical crack.”
According to ONDCP, “As the Nation’s “Drug Czar,” Director Walters coordinates all aspects of Federal drug control programs and spending.”
Walter’s association with right-wing organizations involved in foreign and domestic policy extends beyond the Philanthropy Roundtable. He served as president of the New Citizen Project, an initiative of the right-wing Bradley Foundation. Other principals of the New Citizen Project in the mid-1990s included William Kristol, Gary Schmitt, and Thomas Donnelly, who later also played leading roles in the Project for the New American Century.
His work with right-wing organizations also included his participation as a fellow at the Hudson Institute and his founding role in the Madison Foundation.
Along with William Bennett and John Dilulio, Walters coauthored Body County: Moral Poverty and How to Win America’s War Against Crime and Drugs. People for the American Way, which tracks right-wing groups, summarized the 1997 book: "In the book, Walters and company see the 'moral poverty' of today's youth as the root of all violent crime and drug abuse in the country. They call for a moral awakening brought about through religion and education to ward off the coming wave of youthful 'super-predators,' members of 'the youngest, biggest and baddest generation any society has ever known.'”
Dan Baum, author of Smoke and Mirrors: The War on Drugs and the Politics of Failure (1996), quotes Walters, as saying: "The health people say 'no stigma,' and I'm for stigma'." According to Baum, Walters "took the position that marijuana, cocaine and heroin 'enslave people' and 'prevent them from being free citizens' in a way that tobacco and alcohol do not.'"
Walters held positions in both the Reagan and Bush I administrations, following his mentor William Bennett from the U.S. Department of Education to the Office of National Drug Control Policy. During the Reagan administration, he served as Assistant to Secretary of Education Bennett and representative to the National Drug Policy Board.
During Reagan’s first term, Walters served as Acting Assistant Director and Program Officer in the Division of Education Programs at the National Endowment for the Humanities. Under Bennett again in the first Bush administration, Walters was the ONDCP’s deputy director for supply reduction and chief of staff to the ONDCP director. Walters took the New York Times to task for its editorial criticism of the ONDCP and the drug war. In public letter sent to the New York Times, Walters wrote: “Today's New York Times has published an editorial that willfully cherry picks data in order to conform to their tired, 1970's editorial viewpoint that we're ‘losing the war on drugs.’” In its July 2, 2008 editorial, the NYT said: “The drug cartels are not running for cover. Mexico and parts of Central America are being swept up in drug-related violence. Latin Americans are becoming heavy consumers of cocaine, and traffickers are opening new routes to Europe through fragile West African countries. Some experts argue that the rising price of cocaine on American streets is mostly the result of a strong euro and fast-growing demand in Europe.”
Posted by Tom Barry at 1:18 PM
Email ThisBlogThis!Share to TwitterShare to FacebookShare to Pinterest
Labels: drug policy, ONDCP, Walters

pleased as i am to be mentioned in your blog, the title of my 1996 book is "Smoke and Mirrors: The War on Drugs and the Politics of Failure."

Thanks Dan. Will correct. Pulled this cite from a news report. Haven't read your book, but need to.

Thank you for correcting the name of "Smoke and Mirrors," and for mentioning it on your site.
I just wanted to let you know that I have a book about New Orleans coming out in February, which grows out of my coverage of Hurricane Katrina for the New Yorker. It's called "Nine Lives," and and you can read about it at www.danbaum.com.
Thanks again.