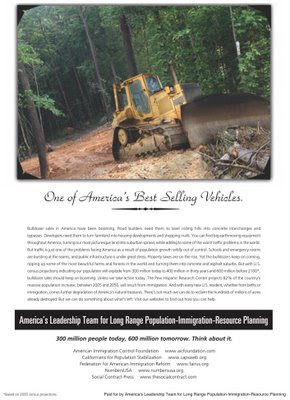 That ad moved me to cancel my subscription to Mother Jones.
Disgusting!

Well written article but misleading. As a long time environmentalists (early 70's to present), population control and stabilization were immediate goals in our attempt to get ahead of the growth/use curve. What is shocking now among progressives who are otherwise pretty environmentally savvy is the notion that we can continue to grow at current rates and it not be detrimental to our efforts to harmonize our human/environment interaction. Science, not politics and feel good ideas should drive debate/solutions. The immoral smear campaign against environmentalists who dare to bring up our out of control growth, not due to higher native birth rates but legal and illegal immigration is appalling. When as a progressive you separate need for a sustainable future with the politically correct idea that any limits on immigration is akin to racism, reality/mathematics/science just went out the window to be replaced by a feel good notion that if third world environments and unliveable mega cities are so good there, they'd be wonderful here.

Efforts by progressives to link sustainable population efforts among long time environmental advocates with racism/hate are bearing fruit. We who have been aware and active advocates of a return to sane, non-exploitive cohabitation with the natural world including population leveling bitterly resent this labeling of our "true underlying motivations". Unless leading ecologists and analysts such as Dr. Jared Diamond are secret zenophobes and racist bigots, the scientific analysis of our situation will be overcome by progressive hysteria and hyberbole.