On the Libre to Cuauhtémoc 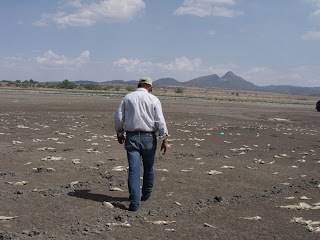 Most everyone heading to Cuauhtémoc takes the toll road. It’s faster, more direct.

The cuota highway, however, has nothing special to offer in the way of new manifestations of northwest Mexico’s water disaster – just more dead cows on barren rangeland, the usual new agribusiness projects that are making the desert bloom pumping the aquifer dry, and the dusty haze that so often clouds the blue desert sky of the Chihuahua desert.

It was the first day of July – election day in Mexico – and I had just spent a couple of days in Chihuahua City interviewing government officials, ranchers, and activists. Martín Solís, leader of El Barzón (a smaller farmers’ organization founded in the mid-1990s), suggested that on my way to Cuauhtémoc I take the libre, which, unlike the cuota highway, skirts Laguna de Bustillos.

The libre had all the vistas of drought, overgrazing, and new agricultural development that the more direct road offered, but I would miss what must surely be the most dramatic picture of Chihuahua’s water crisis – the rapid shrinking of the Bustillos lagoon and the associated ecological problems.

Over the past few months I have been researching the water crisis in what William deBuys, author of A Great Aridness, calls the “American Southwest” – the transborder region that includes the continent’s four deserts.

In Chihuahua no one can remember drier years than the last two. 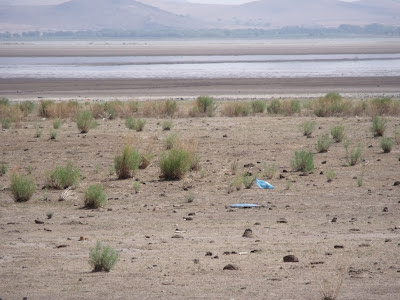 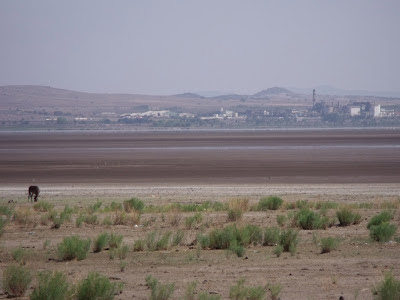 A shimmer of water in the distance as the two-land road turned south toward Cuauhtémoc. Surrounding what remained of Laguna de Bustillos were several kilometers of parched and cracked dirt – not more overgrazed land, as I had first assumed, but the desiccated bed of the usually immense lagoon (which was historically r 25-30 kilometers long and 4 kilometers wide).

Ringing the circumference of the largely dry lagoon lay a collar of dirt-poor communities – what remains of a string of thirteen ejidos (land grants or commons) that since the mid-1930s have struggled to make a living from the lake and the arid rangelands around it.

The lagoon had been drying up so rapidly that many thousands of trout had been caught in shrinking pools and flapped to death in puddles that had long since evaporated. Local government officials estimated that 20-30 tons of trout lay dead in the bed of the lagoon. The massive fish kill brought swarms of mosquitoes, precipitating a public health crisis.

For many decades, Laguna de Bustillos has been an ecological disaster.

Whether full of water draining down from the sierras in the west, or dry from drought and from dropping groundwater levels due to an explosion of new wells, the Bustillos lagoon has long been an environmental threat.

The wastes of all the surrounding villages and nearby towns, including Anáhuac and Cuauhtémoc, have long flowed into the lagoon, badly polluting the water. Academic researchers have repeatedly found that the water is “highly contaminated” and reported toxic levels of various minerals and coliform bacteria, especially fecal coliform resulting from wastewater flows from the surrounding villages and Cuauhtémoc. 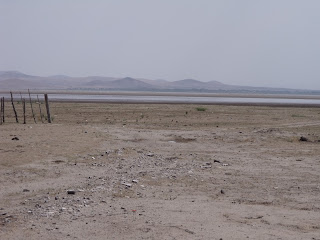 
While the towns have taken some measures to prevent effluent flowing into the lagoon, researchers from universities in the United States and Mexico say that their studies show that agrochemicals, coming mainly from nearby Mennonite farms, now also poison the lagoon.

The immediate danger issues from the chemical-laden dust from the lake bottom that spreads over the area on windy days. When the water recedes, as it does every year, these contaminants blow off the lakebed, resulting in a high incidence of allergies and respiratory problems, according to news reports.

Yet it is outside the perimeter to the lagoon where the tragedy of rural development in Mexico may be most evident.

Settled in the mid-1930s as part of the post-revolutionary government’s agrarian reform, the land that rose edged up from the lagoon was once verdant and forested. Today, however, the land is almost as bare as the lagoon bottom, having been cleared of the Chihuahua pine and grazed to death.

La Selva, the ejido community that lies forlornly at the end of the road that skirts the lake, is anything but its namesake. No trees remain, but hefty tascate (juniper) timbers still stand exposed in the mud-caked structures built by the community’s founders. 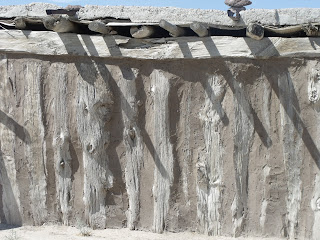 More than half the inhabitants of these lakeside communities have left La Selva and its neighboring communities – many having abandoned the land for jobs in the United States and many younger members of the community land grant having left for Chihuahua and other cities, never to return.

For the last dozen years the community nearest to the libre has found some economic salvation in selling off their land. Favela, the community that abuts the libre, has over the past dozen years been contracting with construction companies to haul off the sand deposits that underlie the long-abused rangeland next to the town.

The several dozen homes of Favela stand between the dry lake on one side, and on the other a sand quarry that has left the adobe and cinder-block homes perched precariously on the edge of the excavation. 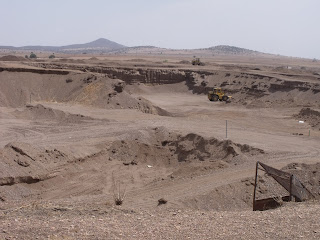 Adrian Estrada, 57 years, who has farmed and grazed the ejido since a young boy, says told me that never before has drought been so intense and devastating in Favela. The lake had dried up before – during the 2002 drought – but never before, he said, had the springs in the surrounding hills stopped flowing and for the first time the lack of moisture and intensifying heat of the last few years is ravaging the pines in the sierras and canyons.

For the most part, the Mexican ejidos are sad testaments to the failure of the country’s agrarian reform – disposing often-marginal land to landless campesinos while providing little in the way of agtech, infrastructural, or marketing support. Government support from the Institutional Revolutionary Party (PRI), the corporatist political party whose presidential candidate won the most votes in the July 1 election, amid charges of fraud and vote-buying, have traditional counted on the support of the nation’s ejidatarios because of PRI’s patronage programs.

From the village looking out toward the disappearing lake and out over the long-since dead grasslands of the Chihuahua Desert, the scope of the tragedy is overwhelming.

As elsewhere in the region, it is hard to say whether the current drought is simply part of the cycle of droughts that have shaped Chihuahua or the onset of a new era – when, because of climate change, we can expect ever-more intense droughts and steadily rising spring and summer temperatures. What is clear, though, is that the ejidatarios and others who live in the vicinity have badly abused the land and water of their high-desert home. 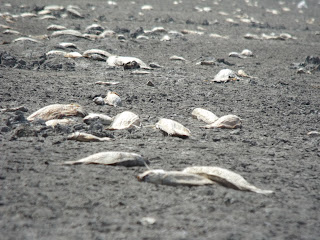 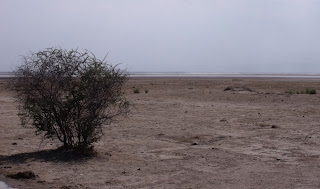 Just as I was about to return to the libre and make my way to Cuauhtémoc for the night, I saw the sign for a museum and there I found some hope and inspiration – which I have found routinely during my travels in Chihuahua.  (See next dispatch.)

Posted by Tom Barry at 11:36 AM
Email ThisBlogThis!Share to TwitterShare to FacebookShare to Pinterest