(First in a new series on Operation Border Star in Texas.)

Mac, as the Texas Rangers and Sheriffs call him, was going hatless. But that may have been because it’s not entirely clear exactly which hat Mac should have been wearing – ranger, cop, or consultant?

Since 2006 many of the key figures in state-led border security operations and information campaigns have identified themselves as DPS employees or part of the Texas Rangers to the public, policy community, and the media, disguising their true identities.

The business card he handed me during the sheriffs meeting identified Sikes as the director of the Border Security Operations Center (BSOC) – which is a type of fusion center for border-security operations in Texas. It’s a project of the Texas Rangers Division, which in turn is a branch of the Texas Department of Public Safety (DPS).

However, Mac Sikes is neither a Texas Ranger nor a DPS employee. Like most of the other key figures behind the Lone Star State’s border security campaign, Sikes is a contract employee.

A “senior operational analyst” at Abrams Learning & Information Systems (ALIS), Sikes became director of BSOC as part of the firm’s $3-5 million annual contracts with DPS since 2006. The recent DPS decision -- in response to a public records request -- to release the ALIS contract revealed the true identity of Sikes.

The Border Security Operations Center is the nexus of the Texas’ own border security initiatives, collectively known as Operation Border Star. ALIS, a homeland-security consulting firm with offices in Arlington, Virginia, was founded in 2004 by Ret. Army Gen. John Abrams to cash in on the billions of dollars in new government contracting funds that started to flow after the creation of the Department of Homeland Security in 2003.

Since 2006 ALIS functioned as the hidden force behind virtually all non-federal border-security operations in Texas. Whether it’s strategy formulation, border crime-mapping, operations management, or public relations, ALIS and its team of consultants have been closely involved in creating what Governor Rick Perry calls the “Texas model of border security.”

ALIS, which has received $22.7 million from DPS and the Governor’s Office for border-security operations in FY 2007-FY 2011, describes its mission in Texas as follows:

Perry and McCraw support an aggressive, militarized border security strategy. They claim that Operation Border Star – their name for Texas model or paradigm – is succeeding in securing the Texas border whereas the Obama administration’s border-security operations are, they charge, a manifest failure.

That’s a claim that was highlighted in a September 2011 report on border security commissioned by the Texas Department of Agriculture. The report, Texas Border Security: A Strategic Military Assessment, was written by Gen. Robert Scales (ret.) and Gen. Barry McCaffrey, who have their own Washington Beltway consulting firms, Colgen and BR McCaffrey Associates.

In their highly alarmist and unabashedly militaristic report, the retired generals describe the border as a “war zone” and contend that purported success of Operation Border Star and the Texas Rangers “should serve as a template for the future” of border security operations nationwide.  Such a model they argued should be “based on proven joint military operations” and the type of “layered ‘defense-in-depth’” strategies employed by the Rangers and Operation Border Star.

The “made-in-Texas” boasts about the state’s model of border security and the “can-do” braggadocio about “Texans protecting Texans” don’t stand up to close scrutiny.

The first funding for Operation Border Star came from the Obama administration’s border-security programs to aid local and state law enforcement. Although the state legislature, starting in 2007, started appropriating about $100 million annually for BSOC and other Border Star operations, federal funding has been the main stay of the Texas model. It’s also an operation that has been almost wholly outsourced to Washington Beltway consultants. 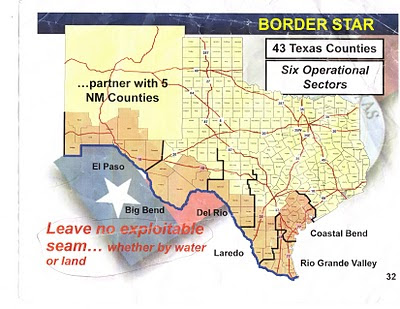 With no discussion, the Texas Public Safety Commission at its August 12, 2010 meeting in Austin approved an “emergency contract for providing strategies and plans to support the management of the Texas Border Security Operations Center (Abrams Learning & Information Systems).”

The commission also extended another DPS outsourcing contract held by APPRISS for another information and technology-driven project called the Texas Data Exchange (TDEx). DPS has paid APPRISS $30.9 million in FYs 2008-2012 for information systems of dubious worth.

Meanwhile, DPS in 2010-2011 repeatedly rejected requests by the Center for International Policy for the various strategy statements, operations plans, and performance reports that ALIS was contracted to produce, arguing that the information was “law enforcement sensitive.” DPS has contended that the release of the classified documents to a nonprofit education organization would place law enforcement officials at risk.

However, these same documents that were denied CIP were apparently accessed by the for-profit security consultants contracted by Texas Ag Commissioner Staples.

Texas Attorney General Greg Abbott has upheld the DPS rejection of the public records requests for documents that would shed light on the structure, operations, and achievements of Operation Border Star and the role of ALIS.

The only documents that DPS did release to the Center for International Policy were the ALIS contracts themselves.

The DPS contract with ALIS, which was signed August 31, 2010, delegated not only the inner-workings of Operation Border Star to the Beltway contractor but also gave the contractor the responsibility for formulating border-security and homeland-security strategy statements, running public-relations operations, and directing law-enforcement operations.

Questions about the value of Operation Border Star and about its political character have been repeatedly raised over the past few years by several Texas media outlets and by the Texas American Civil Liberties Union.

Texas border communities that have been adversely affected by the redirection of state and local law-enforcement agencies into border-security campaigns and away from public-safety missions have also criticized the cost and focus of the Perry administration’s border-security programs.

Posted by Tom Barry at 3:17 AM
Email ThisBlogThis!Share to TwitterShare to FacebookShare to Pinterest

Thanks for great information you write it very clean. I am very lucky to get this tips from you.