The Drug Trafficking Organizations That Can't Be Found

A great divide separates the drug wars at home and abroad.
On the one side, there’s violence of horrific cruelty and unprecedented scope -- involving a continuum of actors including drug capos, amorphous trafficking organizations, street gangs, corrupt politicians and security officials, and the military itself.
On the other side of the divide, there’s a multibillion market for the drug contraband, trafficking and sales networks, street gangs, corrupt narcotics agents, and, fundamentally important, the drug prohibition policy apparatus that keeps the drug trade illegal, criminal, and violent – and immensely profitable.
It used to be that little separated the United States and Mexico but a black line on a map or, as in the common metaphor, a line in the sand extending nearly 2,000 miles. Over the past couple of decades, especially since mid-decade of the 2000s, that line has become increasingly fortified – turning the line into an increasingly effective international barrier.
The drive to secure the border has made illegal crossings of immigrants and drugs substantially more difficult and expensive. Yet, for all the billions spent to “secure the border,” Mexico’s illegal drugs continue to flow north and counternarcotics operatives continue to tap a ready array of crossborder trafficking and distribution networks to move their marijuana, cocaine, heroin, and meth into the near insatiable U.S. market. Along the way north – whether from Colombia, the Caribbean, Central America, or Mexico – illegal drug consumption steadily increases, creating new pathways of social disintegration and violence.
But what are these organizations that produce, transport, and distribute the illegal drugs? Those following the news reports about the drug-related violence in Mexico are gaining increased familiarity with the names of the main groups – Los Zetas, Sinaloa Cartel, Gulf Cartel, the Federation, etc.  The power and ruthlessness of these trafficking organizations, along with the corruption and direct involvement in the trade by Mexico’s security forces and military, help explain why it has been so difficult to root out and rid Mexico of this scourge.
But what their reach into the United States? Surely the combined power of the traditional local, state, and federal counterdrug forces, now bolstered by the billions in new homeland security and DOJ dollars directed against these so-called transnational crime organizations (TCOs) should be able hunt them down on this side of the great divide.
Yet, for all the professions of the Obama administration and the operations of the ever-broadening phalanx of counternarcotics intelligence centers, multiagency drug forces, and new initiatives like the Border Enforcement Security Taskforces (BEST) and the Alliance to Combat Transnational Threats (ACTT) – both organized by the Department of Homeland Security – the drug war at home has proved unable to deter let alone dismantle the networks that smuggle, traffic, and distribute Mexico-sourced drugs.
Why?
In seeking answers, it is worth remembering that, while the drug-violence in Mexico is unprecedented, there northbound flow of drugs from Mexico is nothing new. Our heroin and marijuana supplies have largely come from Mexico even before the drug war was launched, and cocaine is been flowing through Mexico since the late 1980s.
It’s also worth noting that the hundreds of multiagency drug taskforces funded by JAG grants and coordinated by ONDCP over the past couple of decades have a scant record of dismantling their enemy number one – the Drug Trafficking Organizations (DTOs). That’s because these DTOs don’t have the same type of traceable hierarchy and command structure of traditional Organized Crime, like the mafias.
A DOJ-commissioned- evaluation of HIDTA performance, released in 2002, is instructive:
Consistent standards are critical to measuring performance, but when HlDTA personnel were asked in interviews what exactly determined when a drug trafficking organization was deemed “disrupted or dismantled” for the purpose or scorekeeping, answers were vague and inconsistent.
In addition, there is reason to believe that drug trafficking organizations are more amorphous than they were in the past. Thirty years ago, traditional organized crime groups, organizations whose membership and boundaries were easily defined, dominated high-level drug trafficking.
However, enforcement personnel interviewed for this report consistently noted that organizations today are far more nebulous than traditional organized crime groups, and they argued that, with the exception of certain gangs operating in retail dealing, organizations today are better thought of as a confederation or network of free-lance Traffickers, or small trafficking groups, than a tight-knit unit.
When discussing purported spillover violence, the presence of Mexican cartels in the United States, and transnational threats -- as DHS, DOJ, and ONDCP increasingly (and recklessly) do -- there should also be more considered reflection and more professional threat assessments about the amorphous character of the transnational criminal and drug-trafficking organizations that are said to threaten our common security. Otherwise, we are doomed to continued failed -- and costly -- war on drugs at home and in Mexico. 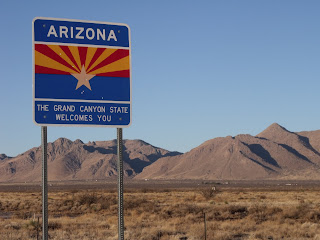 (Next: More on the HIDTA drug war infrastructure in Arizona and elsewhere, and the failures of HIDTA)
Posted by Tom Barry at 5:58 PM
Email ThisBlogThis!Share to TwitterShare to FacebookShare to Pinterest
Labels: drug war