Inside the Drug War (Sort of)

To Die in Mexico: Dispatches from Inside the Drug War
John Gibler
City Lights Books, 2011 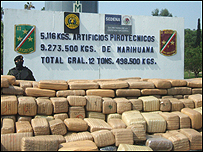 U.S. progressive analysts come to the Mexican drug wars with an instinctive skepticism and deep distrust of the military, drug policy, and U.S. foreign operations. Early progressive criticism of Felipe Calderon’s drug war and of American aid for the military-led campaign proved prescient.
Human rights abuses by the military have surged, the illegal drugs continue flowing to markets, and organized crime organizations evolve and expand their reach.
But it is time – after more than four years of deepening violence in Mexico -- for the left to offer more than its standard repertoire of criticism.
John Gibler’s To Die in Mexico: Dispatches from Inside the Drug War is the latest of a series of recent books on the drug war in Mexico.
These dispatches from Mexico are welcome given the difficulties and dangers – especially for Mexican journalists -- of providing first-hand coverage of the forces and figures driving the drug war. But this short book compares unfavorably with other English-language book-length accounts, including Howard Campbell’s Drug War Zone, Charles Bowden’s Murder City, Ed Vulliamy’s Amexica, and George Grayson’s Mexico: Narco-Violence and a Failed State?
It benefits neither from Campbell’s penetrating analysis of drug trafficking, Bowden’s excellent impressionistic writing and years of experience on the border, the engaging journalistic inquiry and synthesis offered by Vulliamy, or the political history and wealth of data provided by Grayson.
None of the above books is the single-best source on the drug war. But each offers valuable insights and information. Given how murkiness of the picture of what’s happening in Mexico, this new contribution is welcome, especially for its reporting from Sinaloa and elsewhere in Mexico.
But there are no revelations here. The interviews, while fascinating, don’t provide a foundation for Gibler’s blunt and all-too-predictable analysis (given his politics – on full display in his previous book Mexico Unconquered.
If you can endure his simplistic left-bound analysis of current events in Mexico, his interviews with grassroots activists, drug -treatment workers, editors, and reporters (including the always interesting Julian Cardona) are well worth the read.
To Die in Mexico will surely be received favorably by U.S. readers who tend to conspiracy theories, materialist structural analysis, and to blame America for most of Mexico’s problems:

Explaining what he describes as the “theatrics” the drug war, Gibler writes:

“High level federal officials in the United States government know all of this and go along with the theatrics because, among other reasons, the U.S. economy is also buoyed by the influx of drug money, the defense industries profit handsomely from arms sales to armies, police, and drug gangs themselves, the police are addicted to asset forfeiture laws, prison guard unions are addicted to budget increases, and the criminalization of drugs has proven a durable excuse to lock people of color in prison in a country still shackled by racism.”

Gibler dismissively labels the RAND Drug Policy Research Center as “rightwing” without offering any evidence or definition of what is rightwing. But nuance is not a strong suit of this book.
Exaggeration, rooted in his own politics, undermines Gibler’s commitment to delve deeper than headline reporting of the drug war. He writes: “But banks also need drug lords. In 2008, drug money saved the major global banks from collapse and thus,, stretching just a bit, saved capitalism from a devastating internal crisis when the speculative capital markets imploded.” Stretching, indeed.
For Gibler, the drug war and drug prohibition are not utter failures of conservative social politics in the United States. The international campaign against drugs the U.S. has criminalized is an instrument of other U.S. processes and objectives. In the book’s concluding paragraph, Gibler writes: “The drug war is a proxy war for racism, militarization, social control, and access to the truckloads of cash that illegality makes possible.”
Elements of truth, of course, can be found in such analytical summations. But such analysis does little to help readers understand the existential threat that Mexico faces from organized crime.
Yes, drug prohibition must end as should militarized campaigns against the drug trade. But that doesn’t mean, as Gibler implies, that grassroots-led social movement or revolution against the ills of capitalism, is the war we should be joining. Gibler attempts to rally us to the cause: “And this is what should be fought: a future of hunger, forced migration, and thinly disguised slave labor.”
Gibler concludes his dispatches from the drug war with these final lines: “The drug war itself is a rehearsal of our future. To stand by and watch it rage is to step inside the silence that hangs over every anonymous death, blow our heads, and wait our turn.”
Such Bowdenesque prose frustrates and confuses. Unlike the evocative portrayals of border life by Bowden, little is communicated – except a vaguely leftist call to action and solidarity.
But read To Die in Mexico, not for Gibler’s own interpretation but for the views of the Mexicans that shared their own valuable observations.

Posted by Tom Barry at 10:21 AM
Email ThisBlogThis!Share to TwitterShare to FacebookShare to Pinterest
Labels: Book Review