From a distance, it seems so simple.  The border marks the starting and finishing line of national sovereignty.  To ensure U.S. sovereignty, we need to secure the border.

Border security is – from a distance – a no brainer.  The border line needs to be secured.

But the closer you get to the U.S.-Mexico border line, border security policy seems more simplistic than simple.

The Douglas, Arizona – Agua Preita, Sonora port-of-entry is within my sight as I write this morning. It’s a brisk spectacularly clear and beautiful morning in Douglas (and in Agua Prieta).  I am sitting outside a new coffee shop, which , unlike anywhere else in this town of 12,000, has free wi-fi!

Border Patrol trucks line up in the drive-through.  Contemporary Latino music is a welcome reminder that this isn’t Starbucks.  Shakira’s “Loca, Loca, Loca,” adding a pulsing  edge to my caffeine high.

Caffenio,this appealing coffee shop, is new to Douglas. It’s part of a new chain of cross-over coffee shops owned by a Mexican company from Hermosillo, about five hours south of the border.

The divide between north and south is so stark.  The dividing line is no longer a simple line, where one country ends and another begins. Over the past several years, the national boundary has become a non-stop construction zone.

Behind these new lines of security are stationed dozens of the omnipresent green-and-white Border Patrol vehicles and their olive-green uniformed agents.  They occupy a border zone they have declared their owned.  Taking photos is a security risk, and I need to show my passport and move on.

Coming back from Agua Prieta last night, the Customs and Border Protection (CBP) agent at the crossing didn’t take kindly to me.  I noticed a more aggressive posture after he had looked in the trunk.

It may have been the “Enjoy Life. Life is Not a Dress Rehearsal” bumper stick on my car.  It’s a car my spouse normally drives, and I have tried to persuade her to remove the bumper reminder of what life should be, arguing that it’s viewed as an ideological statement by the border sheriffs, prison officials, and the diversity of federal border security forces. 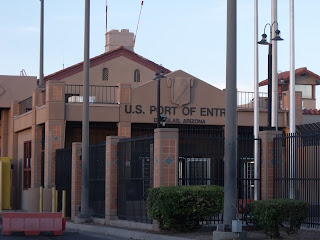 “What did you do in Mexico?”

“What kind of work do you do?”

(Was telling him I was a writer and worked for a Washington, DC policy institute a mistake?)

“Where are you going this evening?”

“What are you bringing back from Mexico?” (A trick question.)

“Nothing,“ I unthinkingly reply to the last question. (Wrong.)

“That’s not the case. You haven’t declared that bottle of wine in your back seat”

“But I didn’t buy it (which was near empty from enjoying life the night before) in Mexico.”

“That’s not what I asked you. I said, what are you bringing from Mexico. And you are clearly bringing that liquor from Mexico.”

“Yes, that’s true. But I am also am bringing my camera, my sleeping bag, my notebook.”  (Did I, the self-identified writer, really want to argue about language and meaning with this stern, calm, but clearly raging border guard? But what should I have said – that ”you are so right” sir?

He closes his station, and I think about the frustrated drivers waiting in line behind me while accompanying him to “secondary inspection.”

A half-dozen or more CBP agents stand idle, while my guard, who may have identified me as an atheist by my partner’s “No Dress Rehearsal” bumper sticker (the border now breeds delusion and paranoia, and I may not be exempt) oversees an exhaustive inspection of the car.

Leaving the hood up, the car doors open, I am told that I can leave.

This is border security,  which is increasingly crazy, ideological, brutal, and insanely expensive.

About expensive.  I need to get going, back across the border for a dentist appointment. Even with dental insurance, I can’t afford the price of a dental crown in the United States.
Posted by Tom Barry at 1:20 PM
Email ThisBlogThis!Share to TwitterShare to FacebookShare to Pinterest
Labels: Cochise County-Agua Prieta

Our friends from APSon complain about how difficult it has become to be a fronterizo. They describe a militarized border similar to the one Tijuana has had to put up with for more than twenty years now.

Things were different during the previous Prohibition. Here's a shot of the two Nogaleses taken by México Fotográfico during the late 1920s. In the middle ground you can see the Customs checkpoints.
http://i55.tinypic.com/t0i2vl.jpg