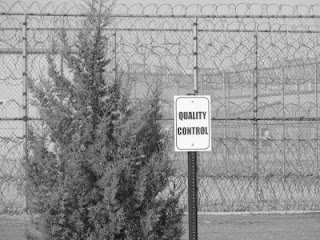 The failure of the Reeves County Detention Center in West Texas to provide adequate medical care spurred immigrant inmates to occupy the prison yard and set fire to prison buildings two times in the past few months.
But neither the government officials in charge of this county-owned prison in Pecos nor the private companies that run the prison and provide healthcare services have commented on prisoner complaints. Information about the state of medical care at the county-owned, privately operated prison have come almost exclusively from inmates themselves in calls to relatives and the media from smuggled cellphones. Reeves County, a desolate West Texas county of some 13,000 residents, built the 3,700-bed prison with revenue bonds, which it repays from per-diem payments from the Federal Bureau of Prisons in exchange for holding “criminal aliens” in this low-security prison. The county, however, has subcontracted out its imprisonment responsibilities to GEO Group, which manages the prison, and Physicians Network Association (PNA), which provides medical and dental care. PNA, which calls itself “a leader in correctional healthcare,” is part of the expanding prisoner outsourcing industry. Founded in 1990, Lubbock-based PNA contracts with private prison companies and with counties that own prisons in Arizona, New Mexico, and Texas. It has two-dozen medical services contracts, including ten with GEO Group (formerly Wackenhut Corrections), the private prison corporation that operates and manages the Reeves County prison At the Reeves County Detention Center, PNA provides correctional healthcare under a lucrative contract with the country government. The country receives between $45 and $55 per day per inmate it receives from the Federal Bureau of Prisons. All of the some 3500 inmates at the Pecos prison are noncitizens, illegal and legal immigrants that are serving time for federal charges, mostly drug possession and immigration violations. For each inmate, PNA receives a $5.85 per diem from the county, which took $7.7 million bite out of the county’s $79 million budget in 2008. In addition, the county covers itself with a $0.8 million annual medical malpractice insurance policy – which will protect it in the event that prisoner complaints about medical abuses are substantiated in court and by federal investigators. When PNA renegotiated its contract with Reeves County in 2006, the company said that it had the experience “to provide excellent, cost-effective, and constitutionally appropriate care.” It boasted, “We have a deep understanding of inmates’ healthcare needs.” Noting its history of medical care contracts with GEO, Corrections Corporation of America (CCA), Emerald Corrections, and Management and Training Corporation (MTC), PNA asserted that it “has never had a contract canceled or been removed from a facility” and was “proud of its record of no substantiated grievances in any facility.” PNA has provided medical services at the Reeves County Detention Center since 2002. At a commissioners’ court meeting in November 2002, prison officials explained why it was necessary to contract with an outsider provider rather than rely on the local doctors and hospital. Warden Rudy Franco told the meeting that of the many problems encountered in the prison “the hardest has been medical.” That’s because the inmates have a tendency to be more demanding. According to Franco, as reported in the Pecos Enterprise (11/25/02) a provider not accustomed to dealing with inmates would inadvertently provide the inmate with medication and other medical provisions that he doesn’t necessarily need. For the county commissioners, worried about healthcare expenses, the decline in surgeries, outside medical visits, and x-rays was impressive. As Franco explained, in the first four months of the PNA contract, compared with the previous seven months, the number of outside medical visits dropped from 59 to four, the number of surgeries decreased from 15 to two, and the total incidents of medical services declined from 3,148 to 222. “We had 101 x-rays and we now have had four since we went with PNA,” exclaimed Franco. Asked by commissioners about the comparative costs, Asst. Warden Tommy Duncan said “That’s a $400,000 savings” with PNA. Duncan said later that the county will also save money because PNA would be installing the communications technology that would allow inmates to consult with a doctor through “television” rather than incurring the expense of on-site visits. (Medical Claims and Malpractice, Part II PNA's Medical Gulag in next post)
Posted by Tom Barry at 2:19 PM
Email ThisBlogThis!Share to TwitterShare to FacebookShare to Pinterest
Labels: Texas-NM Border Series

Medical negligence occurs when a doctor, dentist, nurse, surgeon or any other medical professional performs their job in a way that deviates from the accepted medical standard of care (more on that later). In keeping with our car accident analogy, if a doctor breaks the rules regarding how to treat a patient, and does something that is "against the rules", then that doctor has failed to perform is duty, and is said to be negligent.

While medical negligence does not always result in injury to the patient, it is still an act of negligence. Similar to a driver running a red light and no accident occurring, the driver still broke the law, and is still negligent. Visit Medical negligence for more information.