Antelope Wells is the place to go if you want to see the Obama administration’s economic stimulus package at work. 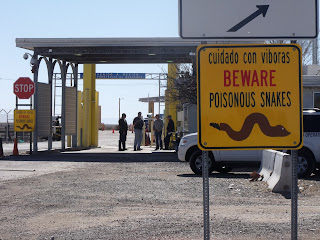 Three years after the administration launched the American Recovery and Reinvestment Act of 2009 (ARRA), the stimulus funds committed to Hidalgo County are still working. But some may question whether the investment in this tiny, unincorporated dot on the map—where the population apparently totals two people living in trailers—is the best use of tax dollars.

Despite the $12.2 million construction project to build a high-tech and well-fortified port-of-entry on the US-Mexico border here, over the past three years fewer people are passing through. Also underway is another ARRA project—the construction of the first “Forward Operating Base” of the Border Patrol in New Mexico.

(By the way, there are neither antelopes nor wells in Antelope Wells, which was named after a distant ranch.)

To see your tax dollars at work and in the process see a bit of New Mexico, including the Big and Little Hatchet Mountains (which gave the town of Hachita its name), driving from Silver City, you head south by southeast about 140 miles. You’ll pass into Hidalgo County, back into Grant County, and then to the southern edge of Hidalgo County—and then on, if you dare, to the Sierra Occidental in Mexico.

On the way you will pass through Hachita, the southernmost “designated census location” in Grant County, and then pass nothing else for 45 more miles until you see the signs for the two stimulus projects at the border: the “ARRA Forward Operating Base” and the “ARRA Point of Entry.”

Nonpartisan economists almost uniformly agree that Obama administration’s economic stimulus package helped the nation from falling deeper into the “Great Recession.” Many say, however, that much more federal spending—and more funding directly tied to employment creation and infrastructure improvement—is still needed to stimulate the nation out of its economic doldrums.

It’s been three years since the administration launched ARRA, and many of us may have forgotten its specific goals, which, according to the government’s Recovery.gov website, are: 1. Create new jobs and save existing ones; 2. Spur economic activity and invest in long-term growth; and 3. Foster unprecedented levels of accountability and transparency in government spending.

Considering that the total ARRA stimulus package was $429 billion, the $17.5 million in ARRA assistance slated for Hidalgo County may not seem like much. Yet at a per capita level, the county—which has received $3,466 in per capita ARRA stimulus assistance—has made out much better than the national average ($1,400) or the New Mexico average ($1,826).

No doubt that Hidalgo County needs recovery and investment—with a steadily declining population (dropping about 18% from 2000 to 2010), the high poverty rate (27%), the closing of the Playas smelter, and the array of ghost towns all underscoring the need.

But ARRA may not have been the county’s ticket to recovery.

Of the $17.5 million slated for the county, Antelope Wells has been the beneficiary of $13.5 million of this spending in the form of US Army Corps of Engineers projects for the Customs and Border Protection (CBP) agency of the Department of Homeland Security.

Roads are important in this sparsely populated county—about 1.5 residents per square mile—so it may make good economic sense that the second-largest ($2.2 million) recipient of ARRA funds for Hidalgo County was the New Mexico Department of Transportation. 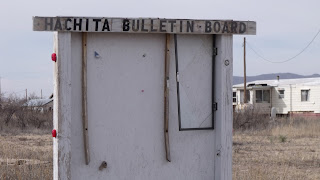 Ranking third was Hidalgo Medical Services, which received $752,000. That grant included funding for the purchase of 30 computers and the training of staff to operate the computers.

Hachita isn’t in Hidalgo County, but it may as well be given how far it is from the county seat in Silver City. I had hoped to get gas and a Diet Coke there before heading the 45 miles south through the beautiful nothingness of the Hachita Valley to Antelope Wells. I knew that Hachita still had a post office (although that’s on the Postal Service’s short list of planned closures), so assumed optimistically that there would also be other services.

At first glance, though, Hachita seems a ghost town.

The old bar, store and gas station are boarded up, and the lovely stone Catholic church, St. Catherine’s, looks long-abandoned and is badly battered.

The rusting hulk of the town’s original water tank stands on the town’s north side. I did find one resident—a self-identified retired Marine named Mike—sitting in front of his trailer. Looking around 360 degrees at the high desert framed by beckoning mountain ranges, he explained that only a few dozen people remained in Hachita, many having left, according to Mike, because of the dubious water quality of the old privately built water system.

What keeps the town alive is the hope that the upgraded port of entry will mean more traffic, including an increased cattle trade, to and from Mexico, and the promise that the town will someday get a new water system as a result of a USDA grant, which is bogged down in the bureaucratic process.

Sandra Alarcon, the USDA officer in Las Cruces who is in charge of the project, acknowledged that the grant was authorized “some years ago” (she couldn’t remember when) and that the water in Hachita had “arsenic and other issues.” But she assured me that the grant to the Hachita Mutual Domestic Water Consumers Association, created in 2005, while still going through bureaucratic hurdles, would soon be underway. 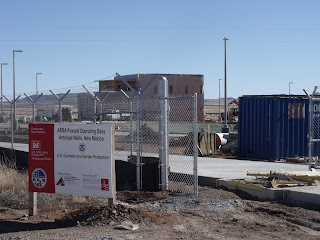 Lyndon Sims, who directs the water association, says that getting the project going has been like “pushing on rope” but he too is hopeful that the requests for bids on the project would go out soon. When asked about concerns of “spillover violence” and crime associated with illegal border crossings, he was dismissive, saying that there was “very, very, very, very, very [I counted them] little crime” in Hachita, although some outlying ranches may occasionally experience break-ins by migrants looking for food or water.

Is there much hope for Hachita’s revival? Even with all the border-security funding, Sims said that “there are no jobs in the area, and I don’t see any coming our way.”

But construction is certainly booming in Antelope Wells. Border security is clearly a higher priority than human development in New Mexico’s Bootheel.

There was no southbound or northbound traffic during my visit, and the CBP agent at the old station estimated that they inspect about four cars a day coming from Mexico.
No doubt these ARRA projects are creating new jobs and saving old ones—the first goal of the economic stimulus bill.

For the most part, these jobs have gone to MCC/Catamount, a Colorado design and construction firm created in 2008 to “provide comprehensive and diverse services to federal clients.” The ARRA Antelope Wells project has created 24 jobs, according to the government’s Recovery.gov.

With respect to “saving” jobs, the multimillion-dollar modernization of the most remote land port of entry on the southwestern border saved the Antelope Wells port from being considered for mothballing, given the low and declining crossing statistics.

The Antelope Wells land port project is part of a $420 million port-of-entry “modernization” undertaken by Customs and Border Protection after the ARRA funds became available.

The upsurge in border-security funding had already modernized and fortified most of the main CBP ports of entry, so the agency directed the stimulus funds toward modernizing 33 minor ports, mostly on the northern border and including three little-used ports of entry on the southwestern border. Many of the ports undergoing modernization averaged one to two arrests per year, and six were scheduled for closure before ARRA money appeared in the CBP account.

The initial ARRA allocation specified $9.6 million for the Antelope Wells port project, but that rose to $12.2 million by last September.

The costs of the port of entry are rising, yet the traffic passing through this remote border crossing is declining—down 29% in 2011. Unlike the Santa Teresa and Columbus ports of entry, Antelope Wells registers no commercial or pedestrian traffic. According to the New Mexico Border Authority, 241 private vehicles crossed into New Mexico at Antelope Wells in November.

Rumors in Hachita and among the construction crew in Antelope Wells have it that as soon as the new ARRA port of entry is open, traffic from El Paso and Santa Teresa will be diverted to Antelope Wells. But Marco Herrera of the state’s Border Authority doesn’t think that likely. “That would be three hours’ extra driving,” he says, noting too that Antelope Wells isn’t authorized to process commercial traffic.

No statistics are publicly available for CBP and Border Patrol arrests and seizures in the state’s Bootheel. Yet overall, the number of border arrests has plummeted over the past several years—even as the Border Patrol is set to expand its presence.

Border Patrol agents also seized 55,264 pounds of marijuana in New Mexico. To put that in perspective, overall marijuana seizures across the southwestern border were over 2 million pounds.

Despite the sharply diminishing pressure on the New Mexico border—in the form of illegal immigrants and illegal drugs—the Border Patrol is beefing up its presence and infrastructure, especially in the Bootheel. A new Border Patrol district station is being built in Lordsburg to handle the quintupling of agents over the past several years. And, responding to public and political pressure to have the Border Patrol stationed closer to the border, the agency is replicating military strategy and terminology by establishing, for the first time, what it calls Forward Operating Bases or FOBs.

The $1.2 million FOB in Antelope Wells, which reportedly includes a heliport and horse corral, is well underway. The location of the second New Mexico FOB in the Animas Valley is still under dispute.

The border security buildup—rising to nearly $11 billion spending annually—can also be seen closer to home in form of hundreds of thousands of dollars from the Department of Homeland Security for border patrolling and equipment purchases by the Grant County Sheriff’s Office.

Reaching Antelope Wells, not having seen another vehicle in the 45-mile stretch from Hachita, I was greeted by two Grant County patrol cars. The deputies explained that they were on border-security duty in partnership with the Border Patrol and the Hidalgo County Sheriff’s Office.

Anyone traveling the Bootheel or along the Chiricahuas down to Douglas, Ariz., will see first hand the proliferation of the Border Patrol. In Douglas, residents say that you can now find a Border Patrol agent (or sheriff’s deputy) hiding behind every cactus and mesquite bush. But actual recovery and reinvestment are harder to find.

(Article and photos by Tom Barry, originally published in Desert Exposure, at:
http://www.desertexposure.com/201202/prt_201202_border_bonanza.php)

Posted by Tom Barry at 2:46 PM
Email ThisBlogThis!Share to TwitterShare to FacebookShare to Pinterest