Critics of the Mérida Initiative will surely find Shared Responsibility: U.S. Mexico Policy Options for Confronting Organized Crime an infuriating assessment of the drug war.
Published by the Mexico Institute of the Woodrow Wilson Center in DC and the TransBorder Institute in San Diego, the editors of this volume of essays accept the legitimacy and worth of the “four-pillar strategy” of the Mérida Initiative.
The acceptance of the four-pillar paradigm of binational collaboration contrasts with the wholesale rejection of what the initiative’s left-of-center critics pointedly label Plan Mexico (tacitly referencing the Clinton-supported counternarcotics/counterinsurgency Plan Colombia).
The essays address various aspects of the initiative’s “four pillars of cooperation”, namely: disrupting criminal organizations, strengthening law enforcement institutions, building a “21st century border, and building strong and resilient communities.
The 2007 initiative, while based on a binational framework of cooperation, is based on the U.S. commitment of foreign aid to Mexico – and to a much lesser degree Central America and Caribbean nations – to underwrite collaborative efforts to fight the threat of drug trafficking organizations (DTOs).
After three years of funding and enhanced binational cooperation, the U.S. and Mexican governments are hard put to demonstrate progress on any of these four fronts.
Only on the first front – disrupting the DTOs – can the cooperating governments point to concrete achievements, such as captured drug lords and the increased inter-DTO competition for formerly secure plazas. Yet, even here, the progress is superficial as other DTOs emerge and the capos are replaced by other ambitious narcotraficantes, violence spreads, and drug corridors shift.
The volume’s editors, the Wilson Institute’s Eric Olson and Andrew Selee and the TransBorder Institute’s David Shirk, call warn that “there is no magic bullet that will solve Mexico’s security crisis in the near term.” But, as the volume’s title indicates, the editors and the authors insist that any solution must be a shared one. They conclude that among the priority areas for enhanced collaboration are efforts to disrupt the flow of firearms and to improve binational law enforcement and intelligence sharing.
In their introduction to the collected essays, Olson and Shirk assert that “an intelligence-based law enforcement strategy, which allows the two countries to develop the capacity to identify key leaders and disrupt the flow of narcotics moving north and weapons and money moving south, is urgently needed.”
Olson and Shirk write that such a strategy is “fortunately…already underway.” Unfortunately, though, “significant limitations in capacity and willpower in both countries” limit the progress of the four-pillar strategy, noting that success in implementing the strategy “will take time.”
Consistent with the even-handed, politically measured tone of Shared Responsibility, Olson point to two major deficiencies in the implementation of the four-pillar strategy. On the Mexican side, the “presence and patrol” strategy of the military and police “continues to dominate,” despite their stated intention to move toward a more intelligence-based strategy. On the U.S. side, the initiative suffers from the lack of the “underfunding judicial reform while prioritizing the ‘presence and patrol’ strategy.”
Shared Responsibility is a valuable contribution to our understanding of the security and social implications of narcotrafficking in the region. It underscores the fundamental importance of bringing informed scholars and policy analysts into a public and policy debate dominated by news reporting and political grandstanding.
But the apparent objective of fostering binational cooperation has the effect of preempting more penetrating analysis of fatal flaws of the Mérida Initiative (including its drug prohibition foundation and its role in bolstering the military-led character of President Calderón’s drug war) and of Mexico’s capacity to address corruption and structural failings of its criminal justice system. The volume’s commitment to shared responsibility is also undermined by the feeble concluding essay by Sigrid Arzt.
The scholarly tone (and quality) of Shared Responsibility contributes to a dispassionate analysis of the threat of the DTOs. But this tone contrasts with the scale of the violence and the growing popular rejection of the prevailing policy frameworks (witness, for example, recent protests in Mexico of drug war) that makes Shared Responsibility seem oddly disconnected  not only with the reality of the drug war but also with any strong advocacy for new policy frameworks.
At the same time, though, the enormity of the governance challenges in Mexico and in Central America (Guatemala and Honduras principally) and the political strength of the drug prohibition obstruct necessary shared solutions. 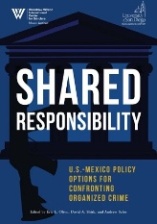 Mexican Military’s Drug War Not New
In their essay on DTOs and shared counterdrug strategies, Luis Astorga and David Shirk remind us that the Calderón-initiated drug war in 2006 is not the first instance of Mexican military involvement in drug enforcement. Rather the militarization of counternarcotics operations has been a near constant since the 1930s. They write:
“[T]he militarization of Mexico’s anti-drug initiatives is a decades-long phenomenon, a ‘permanent campaign’ that stretches back to the deployment of troops in counter-drug initiatives as early as the 1930s. The militarization of Mexican domestic security has included not only the deployment of military troops in troubled states, but also the appointment of military personnel to head civilian law enforcement agencies and the wholesale recruitment of soldiers to the ranks of law enforcement agencies. By the mid-1990s, more than half of Mexico’s 32 states had military officers assigned to police command positions….”
President Calderón has insisted that the military involvement is temporary – until the federal, state, and local police forces are overhauled and until what is currently regarded as a national security threat diminishes to a level of a public security threat. But, as Astorga and Shirk rightly observe: “Considering how long the military has been involved in the drug war, it is unclear when the military’s mandate for participation in domestic affairs will finally end.”
In the typically understated style of editors and the main contributors, Astorga and Shirk observe: “Generally speaking, efforts to combat transnational crime – particularly with regard to drug trafficking – through tougher security measures have borne less than satisfactory results.”
Astorga and Shirk note that the militarization of domestic public security has brought “mixed results, at best.” The problem, though, in demilitarizing the campaign against the DTOs is that “Mexican officials appear at a loss for any effective alternative strategy.”
The authors advocate moving toward a policy regime that treats drug use as a public health problem,” which, they contend, could “yield significant results.” Only a couple of years ago, it was rare to have a national policy institute lend credence to initiatives to decriminalize illegal drugs.
Partly the result of changing public opinion and partly seeing the scourge of a drug war just across the border, more policy analysts and politicians are lending varying levels of support to calls to end drug prohibition. Astorga and Shirk note that a possible scenario for reducing DTO-related violence is “to move away from the absolute prohibition of drug production, distribution, and consumption toward a policy regime in which the state regulates these activities in some significant way.”
Not Just Mexico
The chapter on the role of DTOs in Central America by Steven Dudley, codirector of the Bogota- and DC-based InSight, is a must-read overview of the reach of organized crime in the region. For anyone tracking the extent and impact of drug trafficking organizations in the reach, InSight is an excellent resource – and a testament to the foresight of the George Soros’ Open Society Institute.
The chapter offers a concise overview of DTOs in Mexico and Colombia before charting the role of the Central American transportistas and the direct involvement of the Mexican DTOs.
Dudley reminds us that: “DTOs are businesses. Their objective is to limit costs and maximize profits. They do this by trying to minimize the number of participants, borders crossed, and authorities they have to bribe.”
According to Dudley, “large swaths” of Guatemala and Honduras have already been lost to the government.  “The region,” he writes,” seems ill prepared to face what is arguably a bigger threat to regional security than the civil wars of the 1990s.” And “much of the industry [in Guatemala] is run by ex-army intelligence and high-ranking officers, including many with longtime ties to organized crime.” 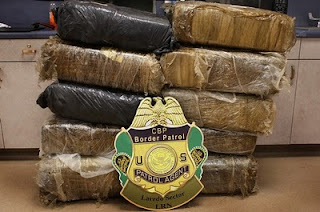