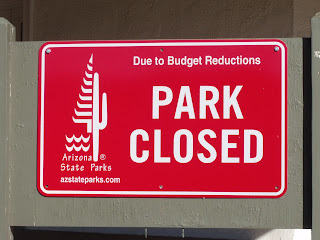 Arizona is in tatters. Politically, economically, and socially the state is reeling.

Described by Pima County Sheriff as “a mecca for prejudice and bigotry” following the Tucson massacre, Arizona also faces one of the nation’s most severe fiscal crises – even worse than that of California, according to a new study by the Brookings Institution.

Facing a budget deficit of more than $2 billion, Gov. Brewer has, with the strong backing of the Republican-dominated legislature, proposed a new budget that severely slashes government spending, especially for education and medical services. Spending for parks will be zeroed out in the new budget.

The fiscal crisis has been building since 2008 when housing prices plummeted, the sub-prime credit crisis hit, and the nation’s Great Recession struck. Over the past couple of years, the magnitude and severity of the state government’s fiscal woes were disguised by the influx into the state of more than $4 billion in special federal funding from the American Recovery and Reinvestment Act (ARRA). But as this stimulus/stabilization funding comes to an end, Arizona’s fiscal plight is raising increasing concerns about the state’s stability.

Anxiety about Arizona’s future arises in large part from doubts about the capacity of the state’s political leaders to identify the fundamental problems facing the state and chart an appropriate course forward.

At the same time, though, the governor, encouraged by the state’s radical Republican leadership, was channeling federal stabilization funds into new state border-security initiatives.

Brewer took a page out of Texas Governor Rick Perry’s playbook by asserting that the federal government’s failure to protect Arizona against illegal immigrants, border crime, and drugs obligated the state to secure the Arizona border with Mexico – all the while downplaying that the state’s border security program is underwritten by stimulus funds intended for the state’s fiscal stabilization. Like Perry, Brewer planned to ride the anti-immigrant backlash and border-security bandwagon to victory in November 2010 gubernatorial contest.

Brewer claimed she was responding to “murder, terror, and mayhem” as a result of the federal government’s failure to secure the border. The stimulus funding, according to the program’s guidelines, must be used by border law enforcement to “combat criminal activity associated with or directly stemming from the international border…specifically: illegal drug trafficking, human smuggling, illegal immigration.” But FBI crime statistics told another story: steadily declining crime rates along the border and throughout Arizona.

The objective of the State Fiscal Stabilization Fund is to “help stabilize state and local government budgets in order to minimize and avoid reductions in education and other public services.” Primarily intended to keep states from cutting their education budgets, the stabilization fund does allow discretionary funding for “Other Government Services.” Brewer has used this opening to plug a hole in the state’s prison budget in addition to creating the politically motivated Border Security Enhancement Program.

Get-tough sentencing laws and the practice of imprisoning illegal drug users (more than half of the state’s prison population) have created a higher-than-average incarceration rate in Arizona, contributing substantially to the Arizona’s severe budget crisis. Unable to pay the wages of the some 1,300 state corrections officers, Brewer dipped into the fiscal stabilization funds for $50 million to cover the prison payroll shortfall last year – which was her first use of “Other Government Services” portion of the ARRA stabilization program.

Next: Border Security Politics and Federal Funding in Cochise County.

This series was made possible by a grant from The Nation Institute.
Posted by Tom Barry at 12:04 PM
Email ThisBlogThis!Share to TwitterShare to FacebookShare to Pinterest
Labels: ARRA Arizona