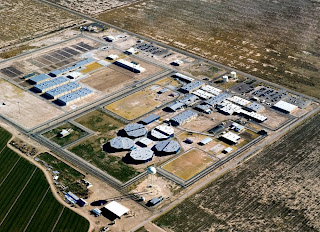 A little more than ten years ago the Bureau of Prisons issued its first Criminal Alien Requirement (CAR) request for proposals for contracts for the imprisonment of low-security immigrants convicted and sentenced by federal courts. The B OP was searching for private and public partners willing to provide prison beds in facilities exclusively for “criminal aliens.”

The CAR contracts proved a boon to private prison companies like Corrections Corporation of America (CCA) and Cornell Corrections since they contracts came at a time when the private prison firms were experiencing rough financial times. The speculative prisons they had been building during the 1990s were underoccupied or empty, as news of prison escapes and widespread abuses dampened the initial enthusiasm of state governments to outsource their inmates to the “privates.”

But the federal government came to the rescue with immigrant inmates who became among the first federal prisoners to be outsourced to private prisons. Immigrant inmates covered by the CAR contracts are particularly attractive to the privates because they are nonviolent offenders, many of whom have been convicted for immigration not criminal violations. Which means lower security costs for the private companies, and also minimal rehabilitation, drug treatment, or educational services since all the CAR inmates are slated to be deported when finishing their sentences.

CCA, the largest prison company, was the main beneficiary of the first CAR offerings in 1999.

CCA won -year CAR contracts worth $760 million. One of the contracts was for 2,304 immigrants, who conveniently, for CCA, were sent from a variety of other federal prisons to an empty CCA prison in – built as a speculative prison by CCA but which it had previously been unable to fill. There was another CCA contract for 1,024 immigrant inmates at its prison in .

Ten years later, CCA has received some bad news. BOP declined to renew its CAR contract for its prison, and instead granted the contract to Cornell Corrections, which owns the largest private prison in . That prison will now be converted to a CAR prison for immigrant inmates – which means that when the new contract begins in October 2010 all the inmates still serving time at the prison will be transferred across the country to an isolated stretch of near the border.

Why did BOP award the CAR contract to Cornell, which will leave CCA with an empty prison?

In a statement, CCA President and CEO Damon Hininger said the company believes the BOP's move is based primarily on "escalating federal wage determination costs in , and does not reflect the quality of operations our company and staff have provided to the BOP."

In a note to clients, according to the Nashville Post, Avondale Partners analyst Kevin Campbell wrote that the wage differential between and , where Cornell will house the CAR inmates, is more than 50 percent.

As part of the CAR-10 contract, the immigrant inmates now at the CCA prison will be transferred to the largest private prison in Georgia, the D. Ray James Correctional Facility located in Folkston.

Cornell, which has two other CAR contracts for immigrants, expects to earn revenues of approximately $205 million during the initial four-year term of the contract.

It’s all about service, so says Cornell.

James E. Hyman, Cornell's chairman, president and chief executive officer, said, "Our company has served the Federal Bureau of Prisons for 28 years. This will be our third facility meeting the BOP's criminal alien requirements, and we look forward to demonstrating our commitment to safety, security and service with a total of approximately 7,500 federal inmates."

The denial of the CCA contract for the raises the question if BOP is prepared to terminate or not renew contracts based on any criteria besides cost savings – such as patterns of abuse, mismanagement, lack of oversight, and incompetence seen so clearly at BOP’s largest immigrant prison in .

INCARCERATING PEOPLE "FOR PROFIT" IS IN A WORD....WRONG!
Even if one does not ask or pretends not to see the rope and the flashing red flag draped around the philosophical question standing solemnly at attention in the middle of the room, it remains apparent that the mere presence of a private “for profit” driven prison business in our country undermines the U.S Constitution and subsequently the credibility of the American criminal justice system. In fact, until all private prisons in America have been abolished and outlawed, “the promise” of fairness and justice at every level of this country’s judicial system will remain unattainable. We must restore the principles and the vacant promise of our judicial system. Our government cannot continue to "job-out" its obligation and neglect its duty to the individuals confined in the correctional and rehabilitation facilities throughout this nation, nor can it ignore the will of the people that it was designed to serve and protect. There is urgent need for the good people of this country to emerge from the shadows of indifference, apathy, cynicism, fear, and those other dark places that we migrate to when we are overwhelmed by frustration and the loss of hope. My hope is that you will support the National Public Service Council to Abolish Private Prisons (NPSCTAPP) with a show of solidarity by signing "The Single Voice Petition"
http://www.petitiononline.com/gufree2/petition.html