The National Imperative to Imprison Immigrants for Profit 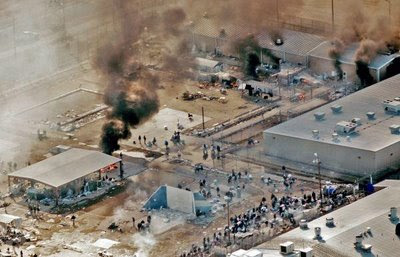 are you in a position to comment on what the government's interest is in detaining immigrants rather than deporting them sooner? one would think it would be less costly to do the latter.

Removal is certainly less costly than punitive detention and removal, as is the current practice. The government justifies detention and imprisonment in two ways: it restores respect for rule of law by punishing those who break the law, and as a deterrence strategy to discourage illegal immigration. Accepting the logic and ethics of the current system, a certain amount of detention is needed to process immigrants for deportation. A larger cost-benefit question about this system is: given the huge costs of detention and removal, isn't the presence of these immigrants more beneficial to U.S. society and economy? ICE detention costs alone are $1.7 billion annually.

i agree with what you say about the rule of law- it often overrides other interests. you could say that the rule of law aspect of it also keeps migrants in a position where they can continue to be exploited- they're criminalized and living in fear. so the cost/benefit question about them being more useful outside of detention rather than in, and inside of the country rather than out, is a good one.

i haven't read all of your blog posts. do you comment on the relationship between the private prison corporations and the government? i've read a bit about the relationship between cheney and the geo group. also some things about lobbyists for private prisons. i don't think these things could be a big enough reason for the huge amounts of money allotted for detention, but i'm wondering what you think.